Adidas Samba Trainers – All You Need to Know

For all the Adidas fans out there, you’ll know about the Adidas Samba trainers.

The Adidas Samba trainers are an instant classic. Adidas are known for creating some of the most iconic shoes of all time, and these Adidas Sambas are most definitely up there amongst some of the best. Originally designed as an indoor trainer for playing football, the Samba has come a long way. With people such as Freddie Mercury and Eddie Murphy sporting these iconic kicks, it’s no wonder why they’re loved so much. 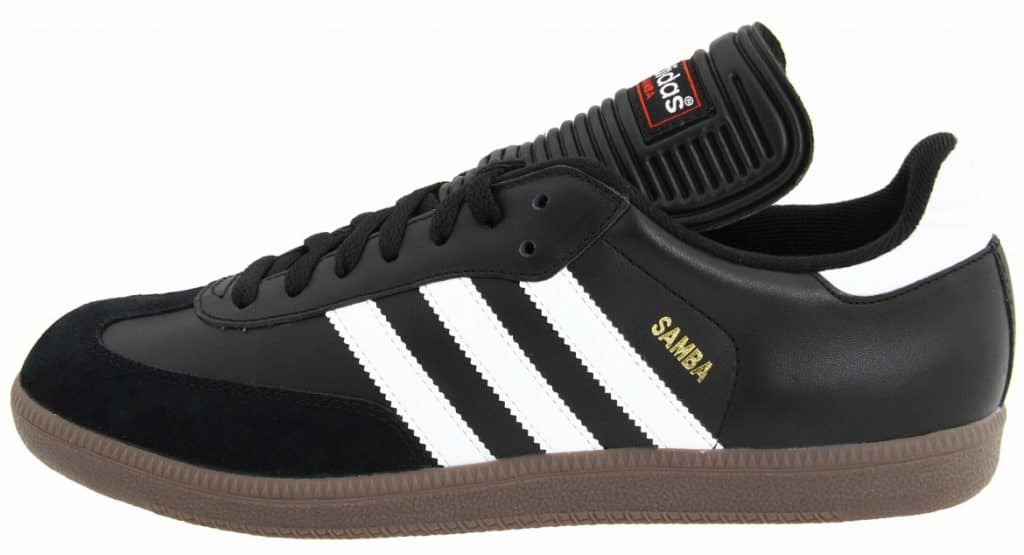 Over the years Adidas has been slowly but surely creeping their way into mainstream streetwear. The Adidas Originals Samba trainer is no different. With the classic tan gum sole and the iconic three Adidas stripes, it’s no wonder that these trainers are so stylish and easy to wear. In a variety of colours and materials, you really are spoilt for choice when it comes to Adidas Samba Classics.

The Samba trainers follow the classic Adidas style of their three side stripe detailing and heel tab showcasing their logo. The shoes’ features are below.

Since their inception in 1950, the Samba has come a long way. As the second best Adidas shoe sold of all time, with over 35 million pairs sold worldwide, it’s fair to say that the Samba is here to stay. The Samba was first produced in 1950 for the association football players to train of particularly difficult terrain, hence the gum sole for grip and ease of play.

Over the next 20-30 years, the Samba Classic has gone down in history. With the likes of Freddie Mercury wearing them, they’re sure to be a long-lasting and stylish shoe. 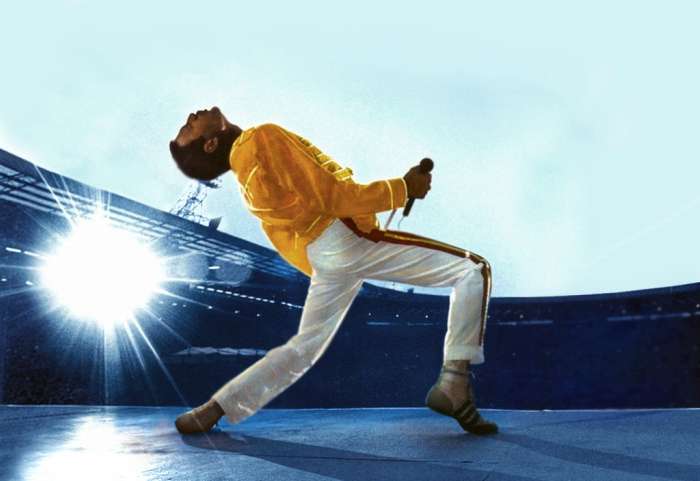 The suede version of the Samba is a unique and different take on the regular leather material that is more commonly seen with this shoe. Adding detail and texture, it allows you to really experiment and play around with this Adidas suede version. 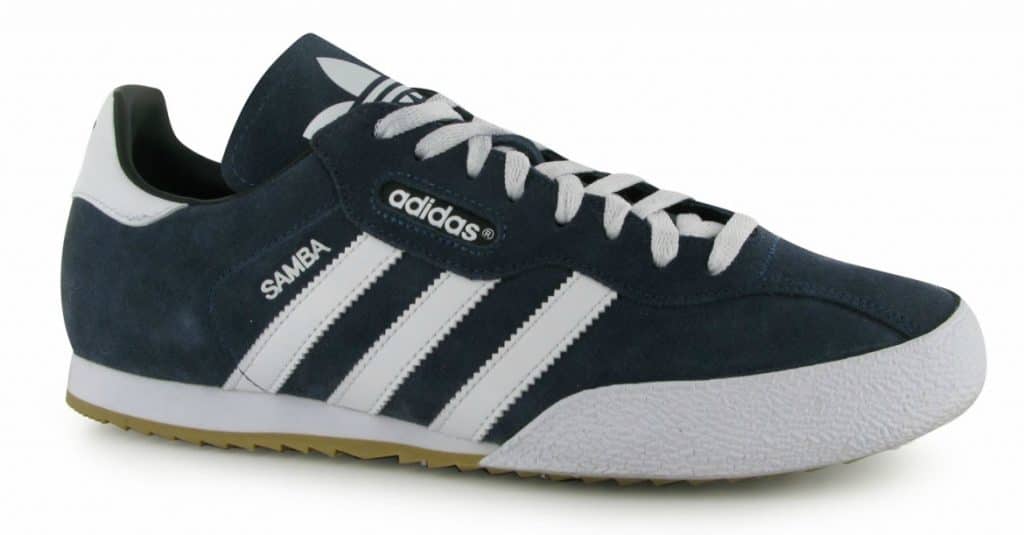 If you’re more classically inclined, then you can always go for the black Samba. Sleek and understated, it really speaks for itself when it comes to trainers. This trainer will be easy to style due to the simple black and white colours.

Going a bit more wild with colour, we have here the Samba blue. A perfect addition to your footwear arsenal, it will add that subtle bit of colour to your outfit. The white stripes create a contrast against the bright blue, making these a stand out choice. 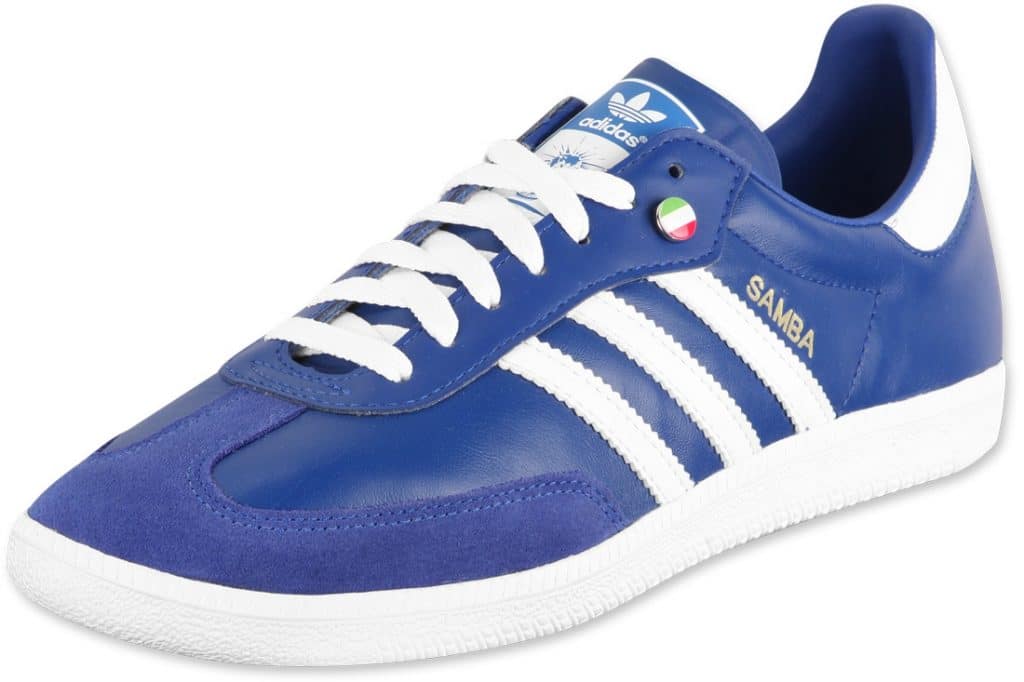 This colourway is a little more subtle than the blue. The Navy version of the Samba is the perfect trainer for those of you who aren’t a fan of black footwear but don’t want to go mad with colour. The suede adds a premium touch to the shoe, but be careful where you wear them- dirt is harder to get out of suede. We have some shoe cleaning products that you can use to protect your trainers to prevent this. 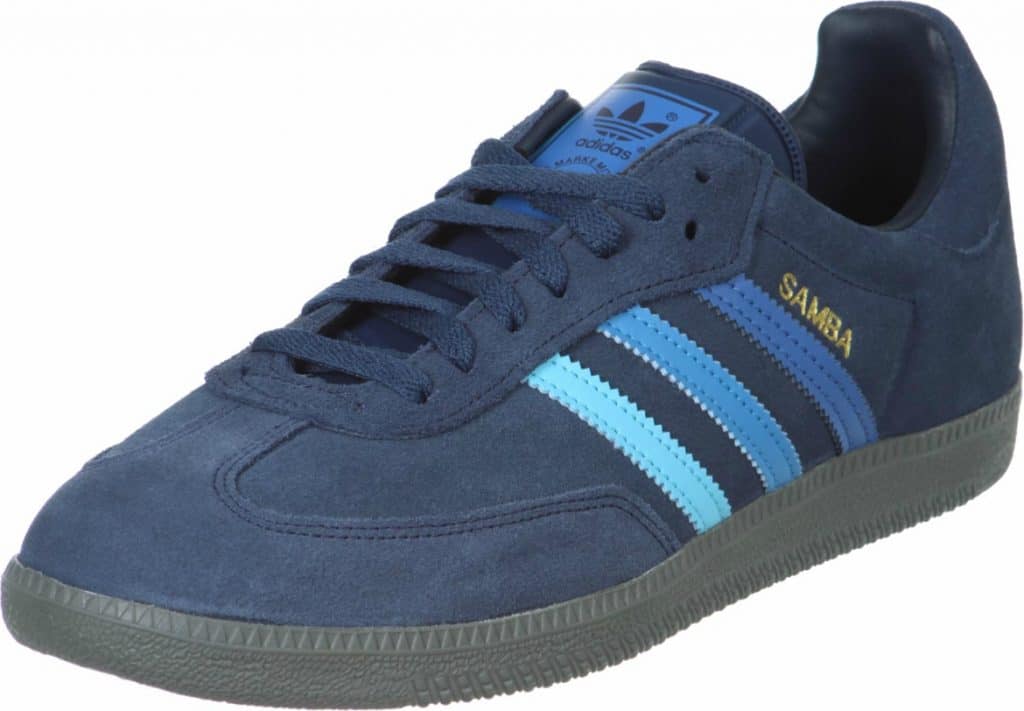 For those of you who like to go wild with colour then the red Samba will be just the ticket. Worn with an all black outfit, they’re sure to stand out from the crowd. These have a cool button detailing of the Spanish flag. 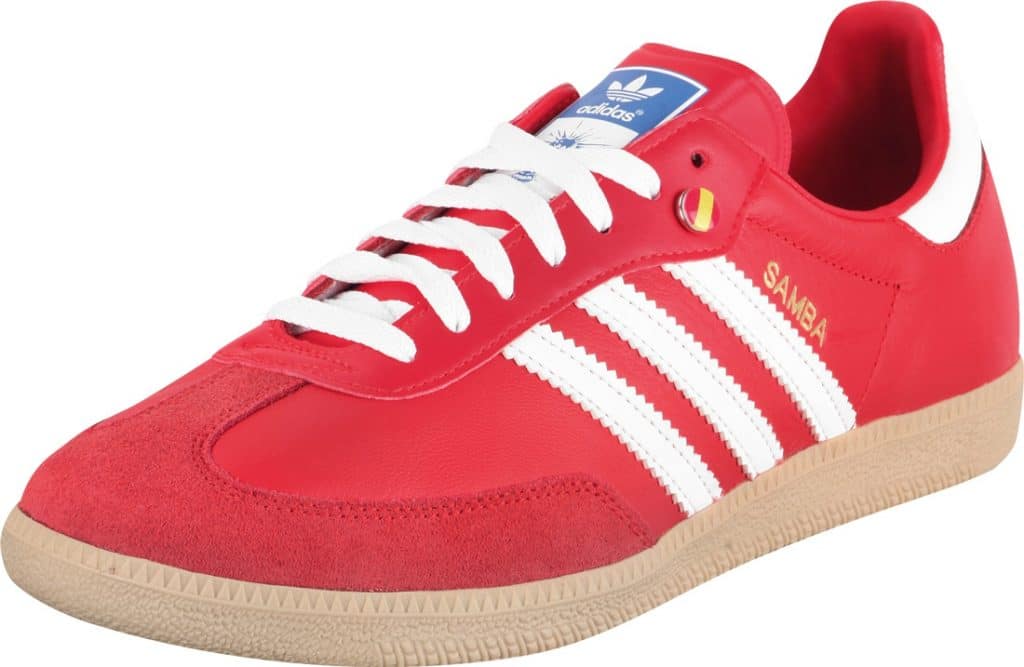 Nothing beats the classic white trainer, and the Samba in white is no different. With that subtle hint of black on the side and the suede toe cap in an off white colour, these trainers are sure to suit the needs of almost everyone. We love the 3D effects on the tongue and heel tab, giving the shoe extra dimensions.

If golf’s your game, yet you still want to be stylish, then these Samba golf shoes are sure to be a winner. With a wide variety of colours and materials on offer, the Samba golf shoe is here to stay. 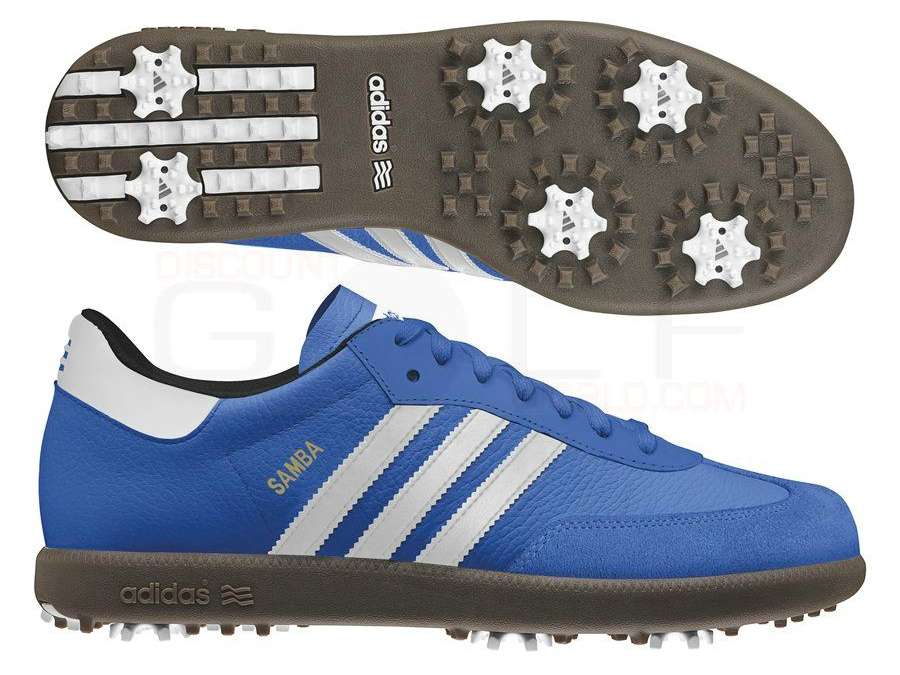 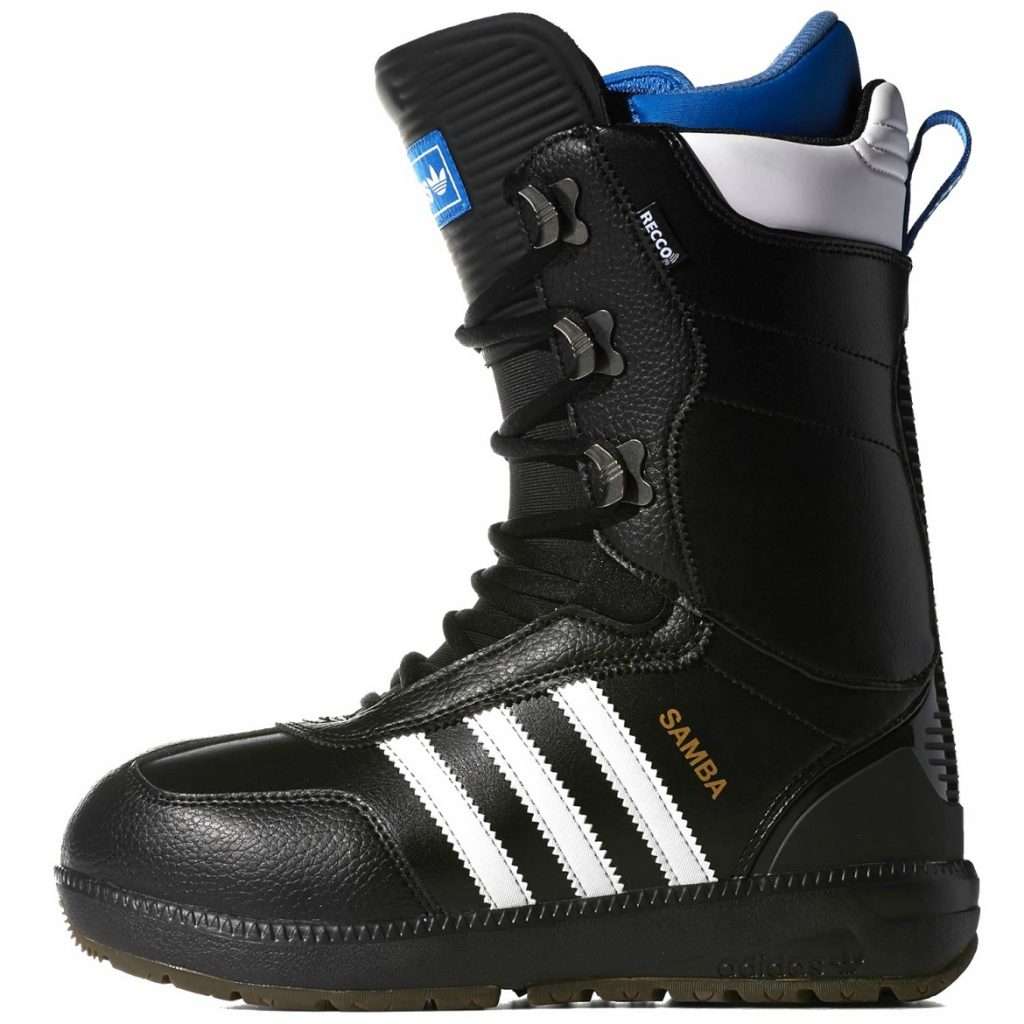 The Samba is an easy shoe to style. Because of its minimal design, you can pair them with just about anything. By ‘anything’, we don’t mean a three-piece suit, we’re more headed towards casual wear. Pair your shoes with a pair of jeans and a T-shirt, or dress them up with some chinos and a casual shirt.

Where to buy a pair of ADIDAS SAMBA