Nike Air Mag Trainers – All You Need to Know 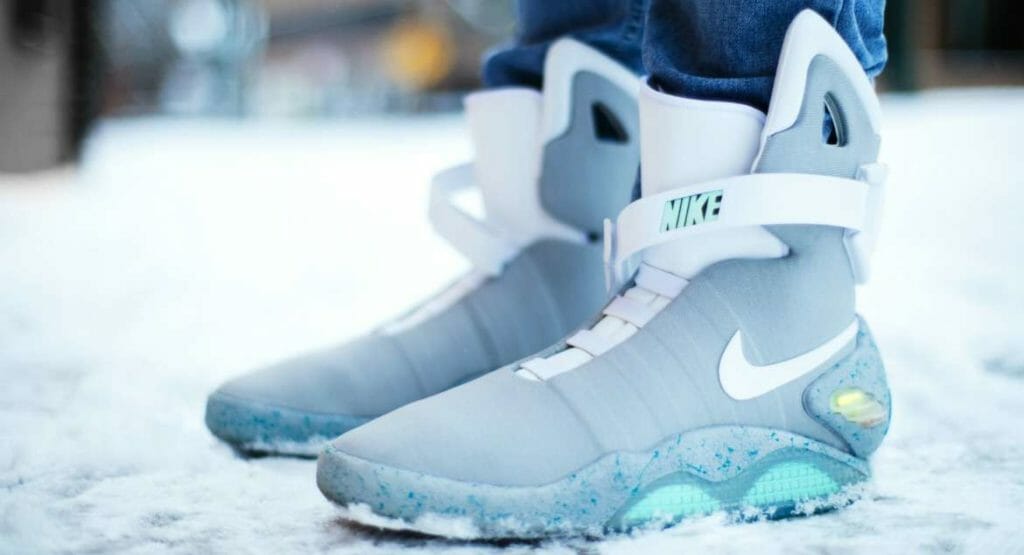 Originally seen in ‘Back to The Future Part II’, the Nike Air Mag trainers have only had two limited public releases since we first laid eyes on them. Read on for all you need to know about the Nike Air Mag.

While the fan favourite Nike Air Mag ‘power laces’ haven’t gotten the retail treatment yet, it’s rumoured that an updated version will feature the self lacing mechanism. Otherwise, the trainers are almost identical to those seen in the popular cult movie. Read on for more information on the Nike Mags.

When originally seen by the public in the ‘Back to The Future Part II’ movie, the power lace feature on the Nike Mag’s was instantly a hit. Petition after petition, partnered with public outreach to the company failed to gain traction, and the technological limits of the time restricted their creation. Nike has since announced that the power lace feature will be present in the next release of the illustrious back to the future shoes. These were due for release in early 2016 but have been pushed back due to delays.

Back in 1989, after the success of the first ‘Back to The Future’ film in the series, Nike designer Tinker Hatfield was approached to create a pair of futuristic shoes for the second film. Over 15 years later, he noticed an online petition to recreate the ‘Back to the Future’ sneakers and worked for over six years on replicating them for retail.

1,500 pairs were created and auctioned on eBay in 2011 with all proceeds going to charitable causes, n0t surprisingly, they went for gargantuan prices ranging from $2,000 – $10,000. On 21st of October 2015, to fans delight, Nike revealed the self lacing Air Mags would be released on the 20th of March, 2016 – unfortunately, due to delays, they’ve yet to be released.

Where to buy a pair of Nike Air Mag

So, Can You Get The Nike Mags?

Well, this truly depends and varies. Did you know that Nike had come up with 1,500 pairs? The truth is that this shoe was targeted at specific buyers, not everyday ordinary wearers. If you are a fan of the glowing look and you want to have the coolest sneaker of all time, make sure that you browse through your options, and stay persistent when shopping. The electroluminescent Nike logo with a high top and upper strap will truly awaken our inner Marty Mcfly spirit! This futuristic sneaker will also be a great investment for those who have a long-term goal, or true sneakerheads.

Don’t you want a shoe that has its own self-lacing system? If you’re looking for the greatest shoe for this September wear, Nike’s iconic swoosh logo is up for grabs! Find the best seller and enjoy high-quality footwear, along with another addition to your fancy closet.