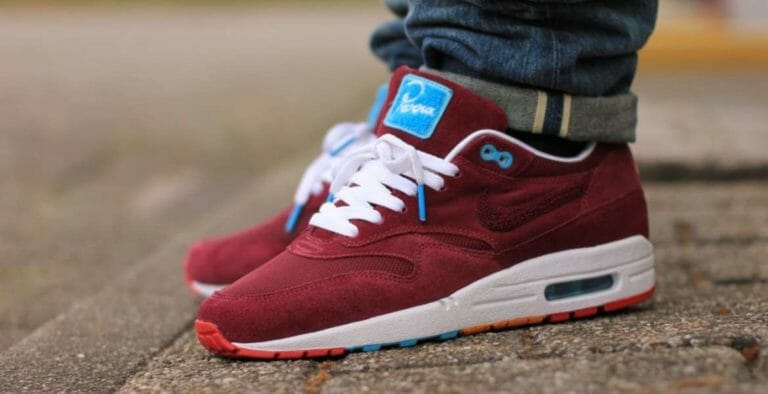 Nike Air Max are everywhere at the moment, being one of the most fashionable footwear choices available right now. You can walk into any high street sneaker retailer and pick up a pair of Air Max pretty easily, there’s usually a vast selection of general releases available at any one time. However, over the years there’s been countless limited edition AM’s, and some of them can prove immensely difficult, and not to mention expensive to track down. 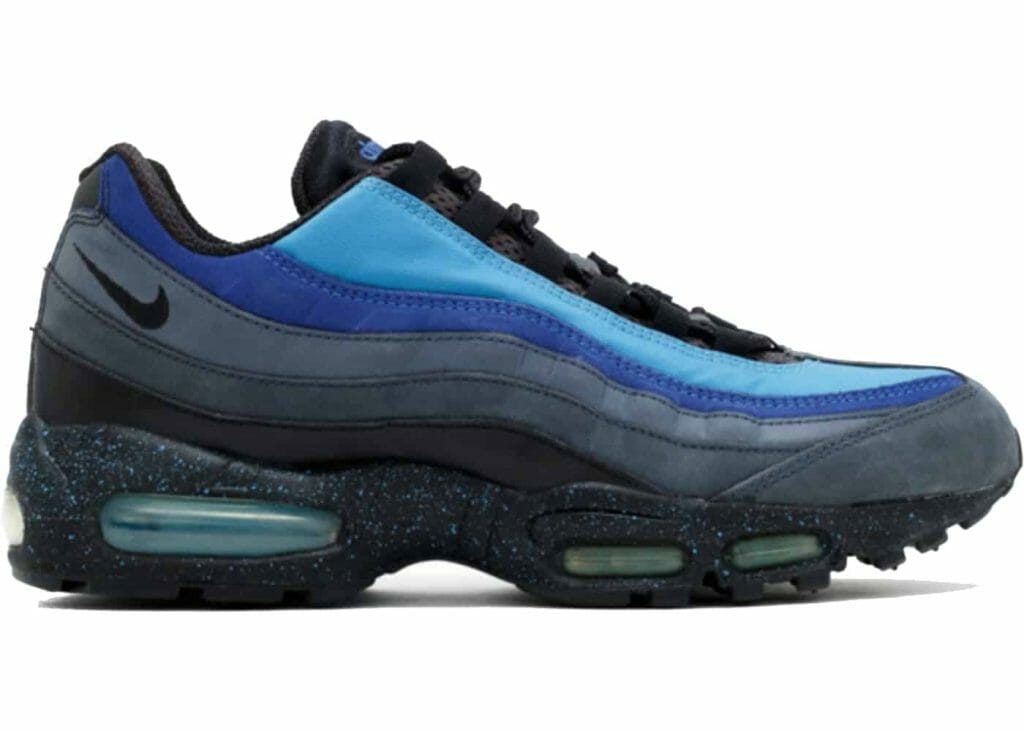 Known in some parts of the UK as the “Air Max 110” referring to its original RRP of £110, the 95 has become increasingly popular in recent months, with stars such as Stormzy bringing it back into fashion. One of the rarest Air Max 95’s is the Stash colourway. Released in 2006, it was the first AM95 to feature a speckled midsole, a highly sought after feature. Reselling for near the £400 mark, if you can track yourself down a pair it certainly won’t be cheap. 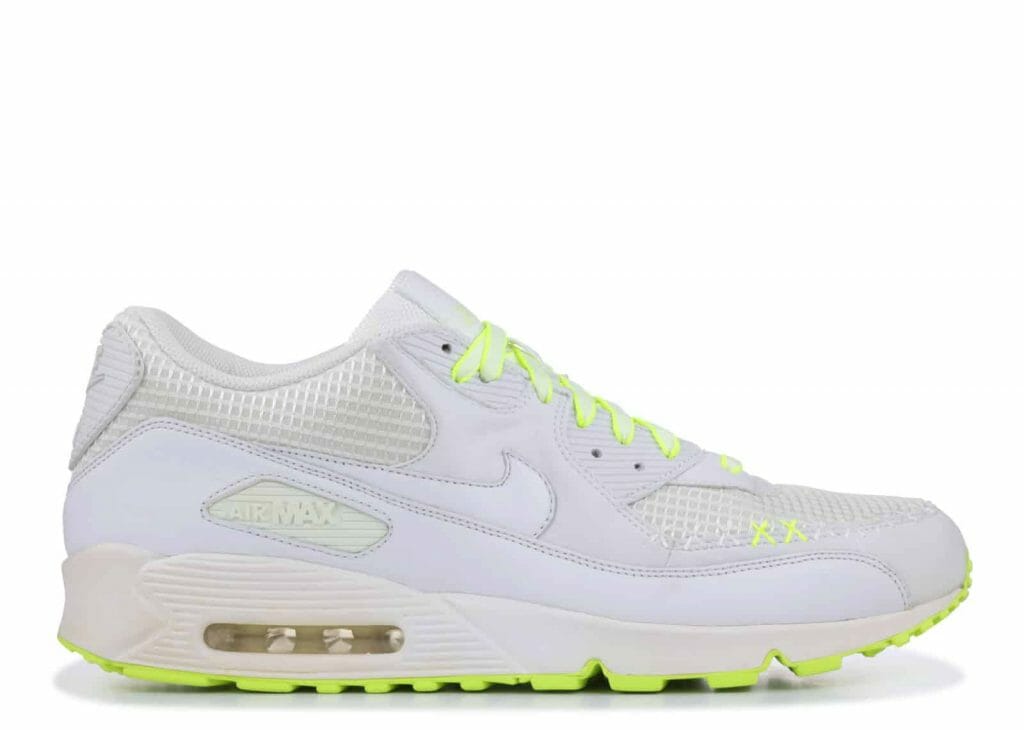 2008 saw Nike collaborate with artist KAWS for the first time, if you follow sneakers you might have seen the recent KAWS Jordan 5. Both black and white colourways featured luminous yellow “volt” detailing. They also featured the artists signature “XX” motif on the mudguard. Resell price in today’s market is anything around £375. If you’re shopping on a budget look elsewhere as this is a very rare Air Max 90. 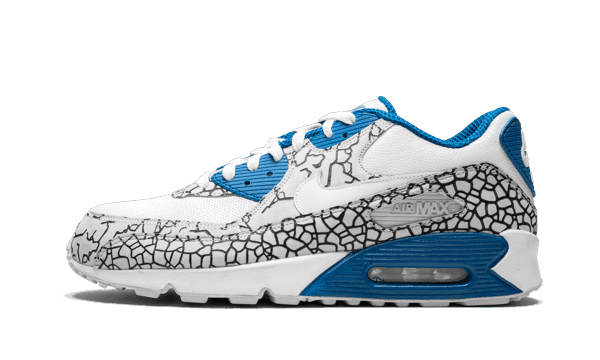 One of the more interesting and unique Nike Air Max, is the “Hufquake. A complete hybrid, and designed by HUF, the shoe is mostly based on the AM90, however also features a current sold, and details taken from the Nike Huarache. It released in 2009, and in the grand scheme of things, compared to other rare Nikes, it isn’t too expensive – a pair on the resell market will set you back around £250. 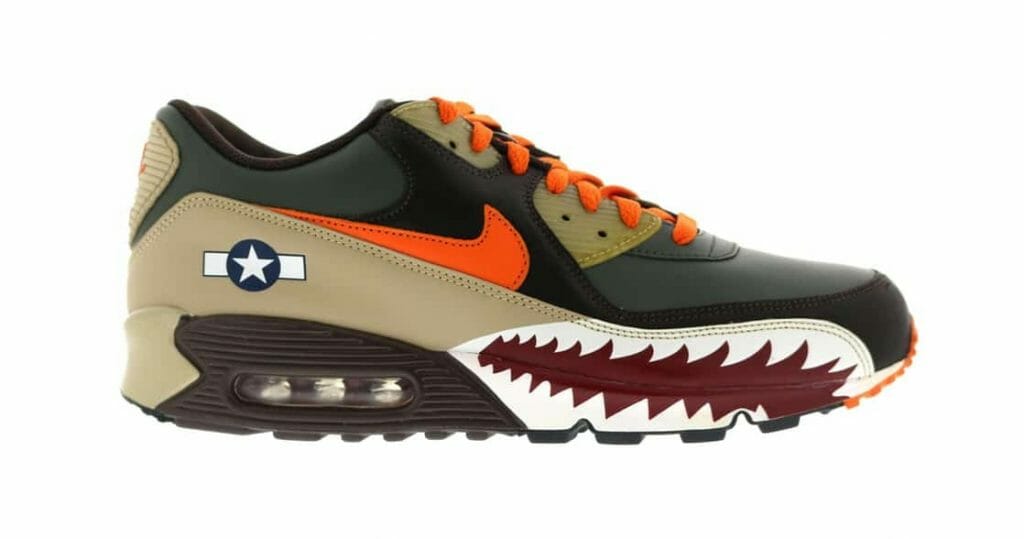 Taking design inspiration from the P-40 Warhawk (an American fighter plane from the WWII era), these released in 2007 in highly limited numbers. They are a very stand-out shoe, with teeth emblazoned all the way along the front of the shoe, and American Air Force motifs printed on the side. As this release was so limited, resell on this pair is extremely high – they’ll set you back around £1600. 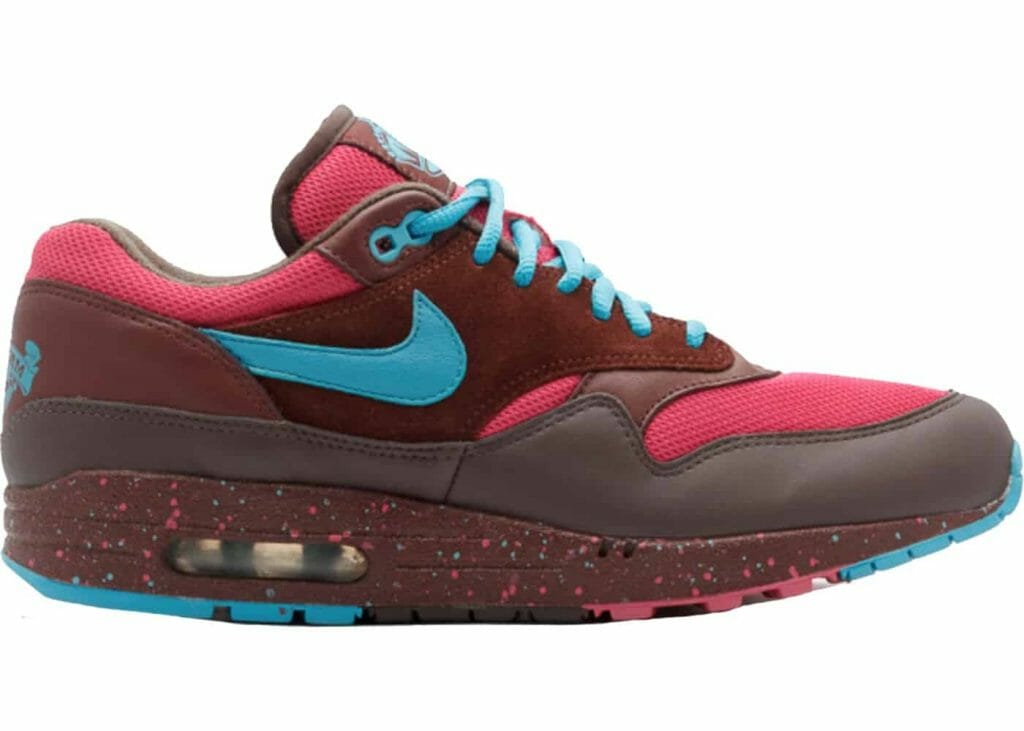 Parra is a Dutch artist, heralding from Amsterdam which is where this collaboration gets it’s name from. Most famed for his work with Patta, an Amsterdam sneaker store, Parra is known for his bright and bold colours, making him stand out from the usual streetwear colour palette. This pair was released in 2005 and was a Nike “Tier Zero” release, in other words – majorly difficult to get your hands on. Rumour has it there’s only 250 pairs in the world.  The most notable features of this release are the speckled midsole, the pink/blue/brown colourway and the “Amsterdam” logos on the heel and tongue. A pair today will set you back a minimum of £1000, this certainly is the definition of a rare Air Max 1. 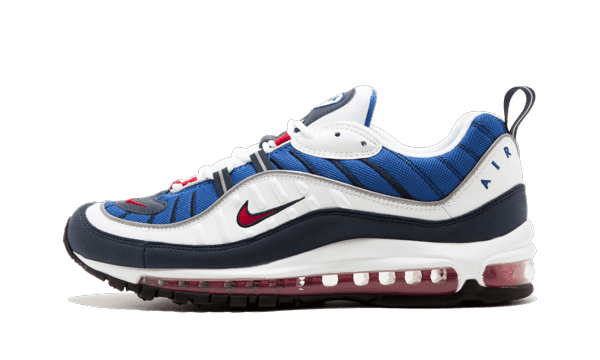 Probably one of the most coveted and unique Nike Air Max models of all time, the 98 is notoriously hard to track down, so much so that finding images of people wearing the original 1998 release is a task in it’s own right. Only 4 colourways were ever released, with one being a UK exclusive release at JD sports. The Gundam was definitely the most popular colourway, taking it’s name from the cult anime series Mobile Suit Gundam. The 98 has also recently shot back up in popularity due to the Supreme x Nike Air Max 98 which released last year. This put the shoe in the limelight again, and made a new generation of sneakerheads aware of it’s existence. Resell on this pair is basically whatever the seller wants to charge, if you can find a pair that is. However there have been hints of a re-release this year, so keep everything crossed as this is one of the best Nike Air Max. 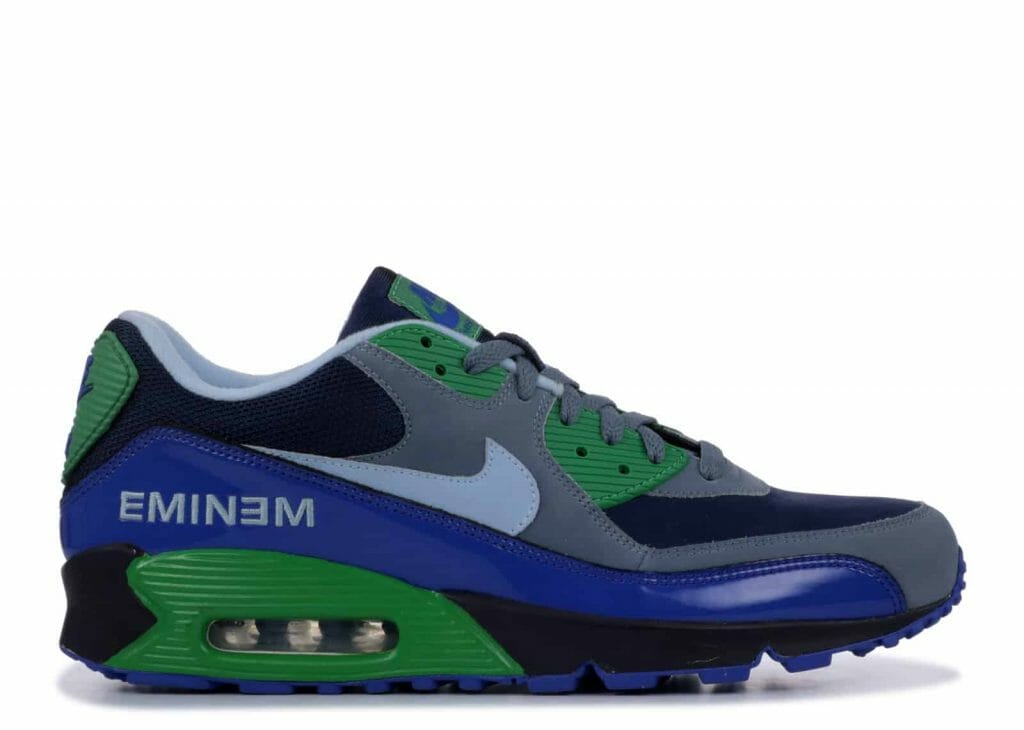 Designed entirely by Eminem, these Air Max ones were a tribute to Marshall’s good friend and D12 crew member, Big Proof, who was tragically killed in 2006. Only 7 pairs were ever made and all were auctioned off to raise money for the rap god’s charity – The Marshall Mathers Foundation. The colourway is an instant classic, simple yet effective. The last pair of these seen up for sale were listed for £2500, and you also more than likely won’t find a photo of someone wearing these, they’re classed as a collectors item. 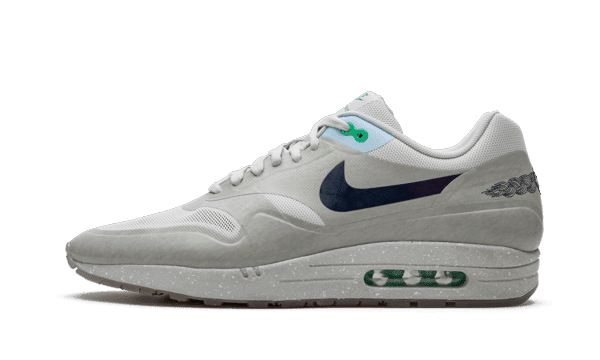 A big favourite with the sneakerheads, and also a relatively new one, this limited-edition collaboration with Japanese designer CLOT launched in 2013. Featuring a hyperfuse upper, speckled soles, hand-drawn style artwork on the outsoles and possibly the best Nike shoe box ever, these were an instant classic due to the attention to detail. You can pick a pair up for just shy of £400 these days. 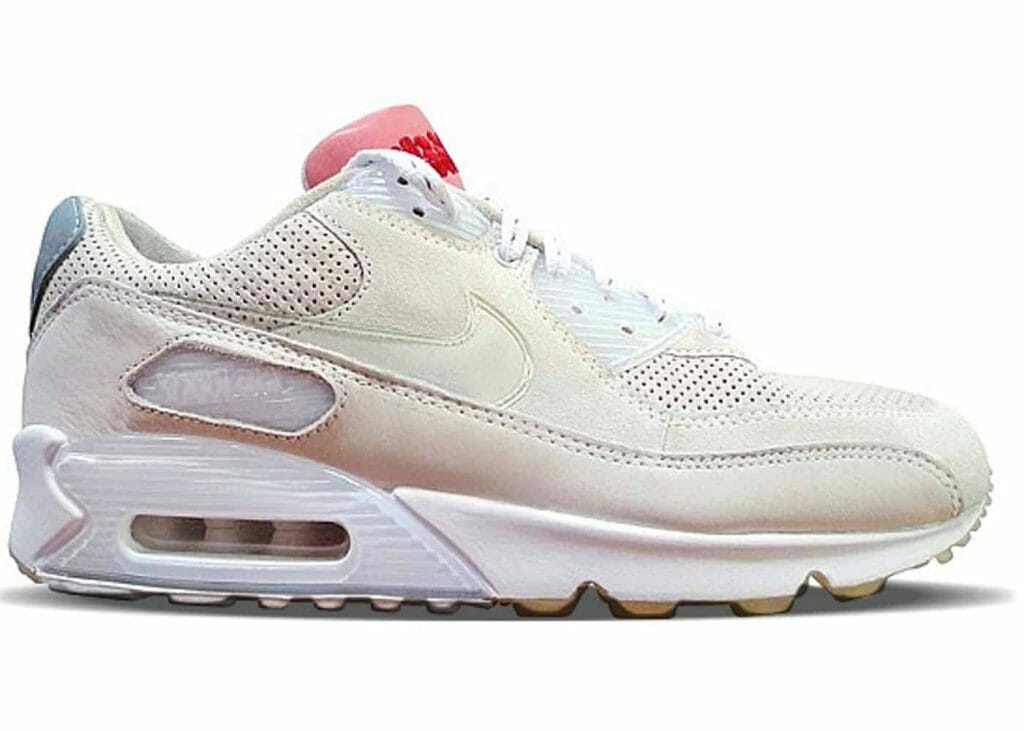 Created alongside grime legend Dizzee Rascal and designer Ben Drury, these are a pair of Nike 90’s that any serious sneakerhead needs in their colleciton. The white suede and pink design is one of a kind, and is based on Dizzee’s LP of the same name. The shoe also features 3M detailing on the laces and heels, and “Dirty Stank Recordings” artwork on the sole. 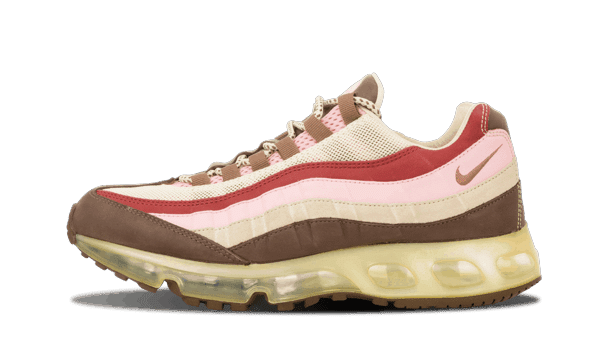 Once again making his way onto this list, Amsterdam based artist Parra has quite a history when it comes to sneaker design. In 2008 he put his spin on the iconic 95 model, the “Running Man” was created. A quickstrike release, the shoe features Parra’s usual statement pink and blue colour scheme, and a blacked out midsole. Parra artwork is also embroidered onto the tongue making a great piece of detail. Available on the resell market for around £300 give or take, if you’re after rare Nike Air Max and on a budget, these could be the ones for you.

When it comes to rare air, there is a lot out there to choose from. We’ve simply picked the best 10 here but there are hundreds more on the market, we advise to have a look yourself. However one thing to bare in mind, if you want the exclusive pairs, you better have a hefty wallet at the ready as all of these come with a huge price tag.