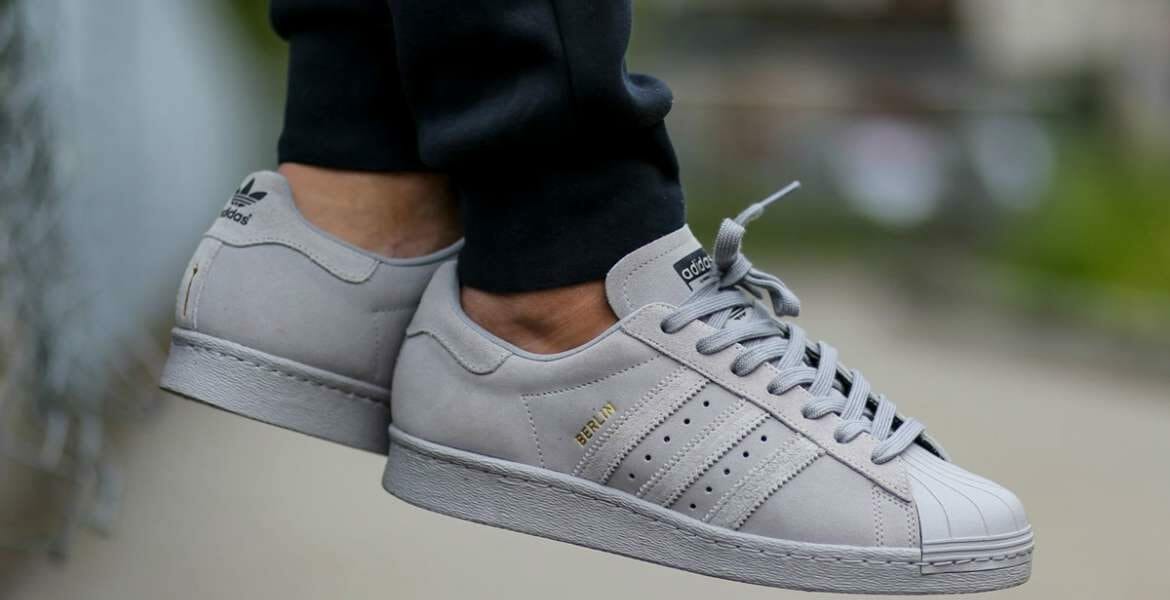 Adidas have dropped a new pack for the monochrome lovers. The Adidas Superstar 80s give us a Super Colour feel but with a new suede update.

Inspired by the vibrant colours of archive vintage trainers, the Adidas Superstar 80s city pack series celebrates some of the most popular metropolitan cities from around the world. The six pack drop celebrates, Toyko (purple), Paris (blue), New York (black), Shanghai (yellow), London (red) and the one we are looking at today Berlin (grey).

So Pharell started the monochrome trend with the Super Colours and Adidas ran with the idea to bring us this premium update. Now I know what you’re thinking, why do we need more monotoned superstars? Well, you can only get Superstars in all leather at the moment, the addition of suede makes them different in texture and appearance.

The Adidas Superstar was the first sneaker to feature an all leather upper, and the rubber shell toe design which is now iconic for the shoe.

It soon made the jump from court to street, and in 1983 was early co-signed by Hollis Queens, NY rap legends Run-DMC. The trio wore the trainers different from most, taking out all the laces (a look forced on people in jail) and pushing the tongue through the shoe. One of the most notable moments was when the group made a song called My Adidas which paid homage to the classic silhouette that they all rocked religiously. Soon thereafter Adidas signed an advertising deal with the group for reportedly $1million, making history as being the first hip-hop group to sign a major endorsement deal with a corporate brand.

Not many trainers have been around since the Adidas Superstars and can say they have lasted and are still produced today. Adidas pay homage to the original pair releasing them in premium suede in a four colour pack drop.

Complex and Adidas team up with DJ Clark Kent Russ Bengtson of the Quickstrike series from Complex to deliver us a summer must have. Two classic silhouettes bring us camo designs that pair well with any summer outfit highlighted by discrete gold accents that can be found on both shoes.