Top 10 Christian Pulisic Tattoo Ideas That Will Blow Your Mind! 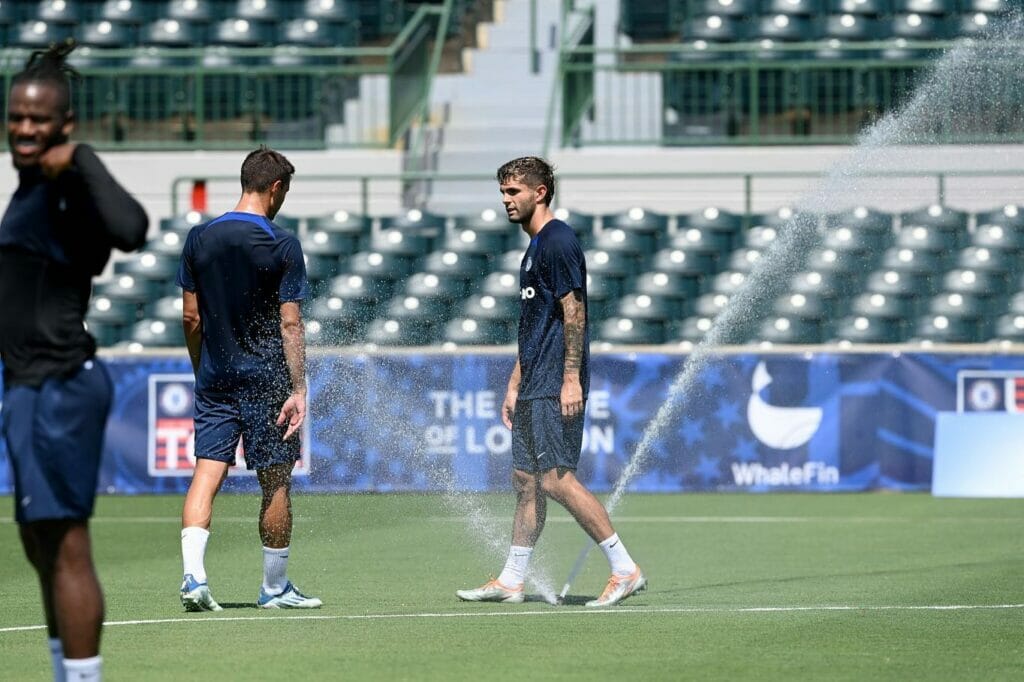 Pulisic fans, your search for Christian Pulisic tattoo designs ends here. We have created the best tattoos to satiate your love for the soccer star.

He got the limelight when he was in Germany with Borussia Dortmund, and he has a net worth of $40 million along with a market value of 54.9 million pounds. Pulisic scored against Real Madrid in the semi-final round of the Champions League. He also won against Manchester City and was the first American to bring the Champions League Medal home. Apart from football, Christian Pulisic is also well known for his tattoos. There are many interesting tattoos on his left arm that can blow your senses. But these are not ordinary body arts. All these tattoos hold great value for Christian Pulisic as he tries to express himself through his tattoos. He tries to capture every significant event of his life in his tattoos. Therefore his tattoos say a lot about him. So if you’re a fan of Christian Pulisic and want to know about the crucial aspects of his life, then keep reading this article and get a chance to get an insight into his life through his interesting body arts. Also, this article has incorporated many more tattoos that look similar to Christian Pulisic’s, so stay tuned!

Christian Pulisic has an iconic bald eagle tattoo on his upper arm and shoulder with an American flag behind it. We can also observe stadium lights on his shoulder.

A bald eagle tattoo means a lot to Americans as it represents their freedom from oppression. The American flag represents the true patriotism of Christian Pulisic. He takes pride in his country, and he tries to make his country proud by acing his football game. The stadium lights represent that his motive behind playing football is to bring pride to America.

This Christian Pulisic tattoo with an eagle and the American flag is a part of his tribute tattoo that says a lot about his feelings towards his country and his motivation behind being a victorious player in the field of football.

Below the flag, the famous quote of Napoleon Hill is inked that says, “Desire is the starting point of all achievement, not a hope, not a wish, but a keen pulsating desire which transcends everything.”

According to this quote, unless you have a strong desire in your heart to get something, you will never be able to achieve that thing. Everything starts with desire. Desire makes you move forward by working hard and motivates you to strive for something without giving up.

Desire is not hope; it doesn’t mean that you will just sit and hope to get the thing you want without having to work hard. It is not a wish either; you can’t just pray for achievement and expect to receive it. The true meaning of desire is a force so strong that it compels you to move towards that dream. If Christian Pulisic had not had this desire in his heart to raise the name of his country with his talent for playing soccer, he would never have become such a successful player.

Christian Pulisic has a tattoo of a tiger’s eyes on the side of his left forearm, which, according to sources, is his favorite animal tattoo. The tiger’s eyes tell us about the sequence of actions of a tiger before killing prey. From patiently watching the prey and keeping an eye on it to attacking it. Which is similar to making a goal on the football field. You have to constantly focus on other players and be determined like a tiger in order to win a goal.

The tiger also represents power and strength. This shows the urge of Pulisic to excel in his game and become the most influential and successful player in the world of USA soccer.

Christian Pulisic has a tattoo of XII XIII MMXIII around his left wrist, which is dated 13th December 2013. This date is very significant to Christian Pulisic as on this day he won against Brazil in one of the friendly matches when he was only a 15-year-old boy. He was accorded with the most valuable player title in that match.

Christian Pullisic has a queen chess piece tattoo on his forearm which he says is connected to the memory of his grandfather. He and his grandfather were really close, and they used to play chess. In fact, Pullisic’s grandfather was the one who taught him how to play chess. And that is still one of the best memories of Christian Pulisic. This is why he decided to get this tattoo after the death of his beloved grandfather. He considers this piece to be very close to his heart.

The queen piece in the game of chess is the most powerful attacker that commands all the soldiers in the game. If you have a muscular body, getting this large chess tattoo will definitely draw people’s attention to your features. This chess tattoo also has the word “made” inked, which is the middle name of Pulisic.

Christian Pulisic has a Mike Wazowski tattoo on his arm. Mike Wazowski is the character from ‘Monster Inc’, which according to a “Goat Talk” video, is Pullisic’s favorite childhood movie. These kinds of cartoon tattoos are a great way to keep your inner child alive and to remember the happy days of your childhood.

The cartoon tattoos have various options and look great on the forearms. The cartoon tattoos say a lot about the wearer a personality and show that even though they have come a long way in life and have grown up, they still have that little innocent child alive in their heart somewhere.

The armband tattoos are a very popular choice among strong men and women as it accentuates their arm’s features and enhances their strong demeanor. It takes inspiration from Pulisic’s tiger tattoo.

This arm tattoo incorporates a tiger’s blue eyes which look spectacular. The eyes are perfectly symmetrical to each other and the shadings done with black and grey colors to depict the skin of the tiger are done perfectly. This tattoo of half face of the tiger represents the inner beast in all of us. It also expresses our strength, power, courage, and integrity as a wearer of this tattoo piece.

The chess tattoos are some of the most classic yet fashionable tattoos. The chess has 32 pieces and each piece holds a specific symbolic meaning. This one is a knight chess piece tattoo that is known for its unique skillset. The knight is not as quick or powerful as compared to the other chess pieces, but the skill it has is capable of passing up others.

This tattoo is for those people who are aware of their qualities and doesn’t believe in the notion that they’re above or beneath anyone. This tattoo is much like Pulisic’s queen chess piece.

This sleeve tattoo represents the fight for freedom and justice in the states of America. This tattoo is for real patriots who want to express their love and respect toward America through this tattoo. The eagle also states the fact that they have the liberty to fly free like a bald eagle. It also symbolizes dignity, honor, and respect. Eagle is often called the “symbol of wisdom” as they can see everything, even directly at the sun.

This tattoo is very popular among Americans as it helps them to identify with their motherland. The vibrant hues of the American flag inked in this tattoo further enhance the color of its long-fought past glory. If you’re a true patriot, then definitely get this aesthetic tattoo inked on you.

This is a tiger eyes tattoo in the shape of a feather. This tattoo is extremely contradictory as the symbolism of a tiger and a feather is completely opposite to each other. The tiger tattoo is something that represents ferocity and strength, whereas the feather represents delicacy and softness.

The wearer of this tattoo is someone that possesses both these qualities. They might seem to be as delicate as a feather but can also turn into a beast if someone gets on their bad side. This tattoo is perfect for Pulisic fans who want to innovate upon his tiger tattoo idea.

Here are some more suggestions of Pulisic inspired tattoo ideas:

What is a butterfly half sleeve tattoo?

How much does a butterfly half sleeve tattoo cost?

The cost of a butterfly half sleeve tattoo will vary depending on the size, complexity, and detail of the design as well as the location and experience of the artist. Generally speaking, these tattoos can range in price from a few hundred dollars to several thousand dollars. It is important to find an experienced artist who can provide quality results at an affordable price. Additionally, you may want to consider starting with a smaller design and expanding it as your budget allows over time.

What are some butterfly half sleeve tattoo design ideas?

There are so many different ideas for butterfly half sleeve tattoos. Popular designs often feature abstract interpretations of a butterfly’s wings, detailed 3D images of the insect, and colorful floral arrangements. Other popular design elements include quotes or other text, symbols like stars or moons, and geometric shapes. Additionally, you may want to consider incorporating elements from your personal life such as meaningful dates, initials, or even a portrait of someone special. With so many options to choose from, you are sure to find a design that is perfect for you.