10 Best Knights Templar Tattoo Ideas You Have To See To Believe! 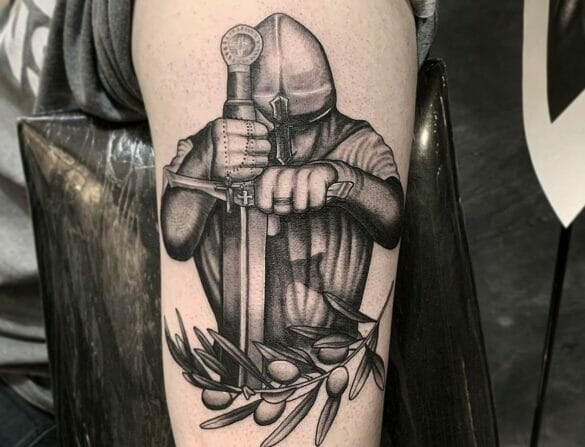 Drawn towards the enigmatic medieval tattoos that radiate chivalry? Fret not! We have collected the best Templar Knights tattoo to help you get inked!

Knight tattoos stand as a sign of loyalty, nobility, bravery, and the conventional virtues associated with the stature of a knight.

Naturally, the meanings associated with a typical knight tattoo are a remnant of the middle ages when their association was with the king or the church. A knight and his services were acknowledged and surely credited as a sign of devotion for the country.

Hence with all the goodness linked to typical knight tattoos, the knight templar takes the magnificence further above. Being an integral part of the Church, the Templars held a primal role in Christendom and maintaining the finances for the authority. History accounts for their rigorous fighting for Crusades, highlighting the loyal rangers of the Church who used to carry forward such difficult operations. European men generally tend to wear these tattoos but the design has spread over time to other parts of the world and even women customize their knight tattoos with style. So, if you are a person who believes to resonate with the rage and devotion of a knight, read on to find some of the coolest designs to fashion yourself with!

A knight on horseback with a sword in hand has a majestic quality that makes art enthusiasts coming back for more. Here the artist paints a picture of a knight dressed in his armour going for a battle to protect and strengthen what he stands for. What makes this black and grey piece of art spectacular is the artist’s use of fine dot work and shading. Place this on your arm and it will pop just right on your skin.

Add a bit of colour to your body with this templar knight tattoo that uses just the right amount of colour to the overall intense design in grey. The quintessential red in the cross makes the design seem complete and brings it back to life. You can place this design anywhere on your body and it will form a gaze-worthy memento in your collection.

Knight tattoos are done best when they resemble their original metallic ensemble. The shine of the seemingly metallic image develops a sense of hyperrealism and serves to honor the ones who fought for their countries and cultures. The boldness of this design will throw anyone off-guard and get you a statement sleeve tattoo.

If you like the sport of grey tattoos, give this piece of art some special attention. Devoid of the figure of a templar knight this design showcases a skull, the infamous Illuminati symbol, and some Latin words that are directly associated with the Church. This tattoo could be interpreted as a testimony of the dedication of a knight till he is dead. The skull motif along with several other minor intricacies make this tattoo an off-beat recreation of history that can fall anywhere on your body and serve its purpose.

This templar knight tattoo is the best example of how to develop your tattoos in colour without compromising on the essence of the motif. The artist here makes the use of a number of complementing colours to bring about a striking beauty of the knight with his sword and shield. This templar knight is a great choice for those who don’t fear experimenting with body art.

This one is for the minimalists out there who keep their way out of hassles. Featuring a typical representation of the templar symbol with delicate linework, this tattoo design is appropriate if you are looking for compressed images that contain the same connotation. Owing to its size, you can site this tattoo anywhere with the scope of good exposure.

If breaking the stereotypes is your thing, give a sleeve tattoo some serious thought. The artist here incorporates a lady knight in shining armour, reversing the images sold by mainstream media. The use of black and grey further adds a glistening shine to the arm that doesn’t let the design become monotonous. It is fitted for both men and women and would exhibit that the wearer is a free-thinker.

This design is made straight out of the fundamental elements that are evident in a templar tattoo. This tattoo is sublime and simple both at the same time. The chest is a good site to ink this tattoo with its enormous wings owing to the liberty of surface area that it offers. Placing the tattoo just below your clavicle would exhibit the high sense of regard that you might have for the Templar.

Your forearm will be well-spent if you are looking for smaller tattoos keeping intact the dangerous element that we all like in a knight tattoo. The idea here is to project an outcry from the insides of the cross, portraying a rather ghastly design. Black ink dominates the image thereby increasing the intensity of the tattoo.

Knights Templar Tattoo On Back

Capturing a knight in action is always a great idea for most men who have always carried a bold persona with pride. This tattoo envelops almost the entirety of your back with the ravishing images of a Crusader. The angels further highlight the Christian imagery and shed light on the purpose of praising the Lord.

There are a plethora of Knights Templar tattoo designs to choose from, so much so that it would wobble your mind. Many designs will seem appealing to your eyes but it is best to first consult with tattoo artists and then go on brainstorming with this majestic trope. To ease you some trouble, here are some knight tattoo ideas that you can use while ideating: