10 Best Traditional Tiger Tattoo Ideas You Have To See To Believe! 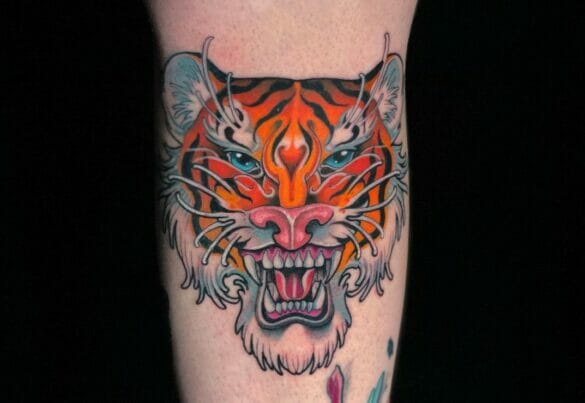 Traditional tattoos have been enjoying quite a popularity in the tattoo circuit lately.

The tiger has various meanings and symbolism across many cultures worldwide. It is the national animal of India while the Chinese god of wealth and good luck, Tsai Shen Yeh is usually seen riding a tiger. In Japan, the tiger and the dragon are seen as forces that can control the rain and wind. Considered as one of the four sacred animals, the Japanese tiger stands for the season of autumn, is a symbol for North, and is also said to possess the ability to manoeuvre the wind. If you are looking to get a tiger tattoo in traditional style, then this specially curated list of traditional tiger tattoos is a must-read for you.

The imagery of people adorning animal headdresses can be traced back to ancient warriors helming from the early traditions of the Nordics, Aztecs, Native Indians, Africans as well as those found in Ancient Rome. In such tattoos, such as this traditional tiger head tattoo, the cowl is often adorned by the female warriors. This stunning traditional tiger head tattoo uses shades of brown and black to bring to life the portrait of an ancient female warrior wearing a headdress made from tiger skin. Get this traditional tiger tattoo if you want your body art to portray the unleashing of the animal instinct within you.

The tiger and a snake are some of the most dangerous animals found in the jungle. Both the snake and tiger tattoos are a symbol of male sensuality and sexuality as well as the passion and virility of a person. A tiger tattoo can also be a symbol of personal strength, protection, and courage, while the snake is a symbol of power, desire, and temptation. Due to this conflicting nature of the above two subjects, these snake and tiger tattoos can be a representation of leaving behind toxicity and virulent traits and habits you might have.

Tiger tattoos represent power, protection, and a sense of superiority. On the other hand, the human skull is a symbol of death and the inevitability that awaits each and every human being. However, this particular traditional tiger tattoo, with a skull in its mouth, symbolises that not all humans are scared of death. The use of vibrant hues and strikingly bold lines used in this tiger tattoo, in accordance with other traditional tattoos, makes it an absolute eye-catcher.

While those getting inked for the first time or are on a shoestring budget opt for minimal tattoo ideas that are small in size with less complex designs, the seasonal tattoo enthusiasts go for tattoo sleeves or a tattoo design that is not only large and complex but also boasts of a wide range of colours and intricate detailing. This traditional tiger tattoo design may be a dream project for most tattoo enthusiasts out there with its huge size, a lot of delicate detailing, and patterns centring around a giant Royal Bengal tiger and a wild viper. The sheer size and compelling expression on the savage beast as it takes on the poisonous viper is enough to instil fear on the faint-hearted. However, settle for this big traditional tiger tattoo piece only if you are comfortable with the size and appearance as this will require a lot of time, money, and passion to be executed perfectly by an experienced and professional tattoo artist.

Tiger tattoos often symbolise sheer power and represent strength. While the first-timers are on the lookout for minimal tattoos, the seasonal tattoo enthusiast opts for tattoo sleeves. A tiger tattoo sleeve is a very cool choice of getting inked as a sleeve tattoo gives a much larger canvas to draw the black striped wild beast. With much larger skin space to work on, tattoo artists can use their expertise to make the giant tiger look scary and formidable which is in line with traditional tiger tattoos. However, we would advise only seasonal tattoo enthusiasts to go for these traditional tiger tattoo sleeves as it can be a bit too overwhelming for those getting inked for the very first time.

While most of the traditional tiger tattoo designs on this list make use of a colour palette consisting of rich and vibrant hues, this particular tiger tattoo relies on the classic tattoo inks of black, white, and grey. These colours once formed the only colour palette used in the tattoo industry but with the advent of new technology, a whole wide range of hues was introduced that consisted of even neon ones. However, black and white continued to be classical tattoo ink preferred by conservative tattoo enthusiasts and the popularity of grayscale and black and white tattoos never waned. This particular white tiger tattoo design bears testimony to that with its subtle use of black and white ink as well as extensive shading technique to make the horrifying wild beast look alive. Go for this white tiger with black stripes if you prefer the conservative tradition of tattooing over the new and popular ones that use a wider range of hues.

Owing to their simplistic two-dimensional designs, overfilled use of the colour palette and the usual use of bold black coloured outlines found in most traditional tattoos, the American traditional flower tattoos are in much demand within the tattoo community. Each traditional flower design has some specific symbolism and characteristic attached to it. This particular traditional tiger body art features a tiger head coupled with a flower drawn in traditional design. While most traditional tiger tattoos feature the wild beast in a scary manner much akin to this tiger tattoo, the presence of a flower adds a feminine flair to the picture that somewhat softens the scary and bold appearance of the overall tiger tattoo.

Often considered as the most powerful and supreme among all the jungle cats, the tiger and panther tattoos usually comprise of both the beasts in conflict with each other. This traditional tiger tattoo design, coupled with a panther tattoo, employs the same technique by drawing both the cats in a traditional style. With each of the cats inked on either leg, this tattoo can symbolise an internal battle that a person often goes through in life.

Going by the current trends, traditional tiger tattoos will remain a popular tattoo choice among tattoo enthusiasts. As always, opt for an experienced and professional tattoo artist to save yourself from future skin issues. Happy inking!