101 Best Traditional Snake Tattoo Ideas You Have to See to Believe! 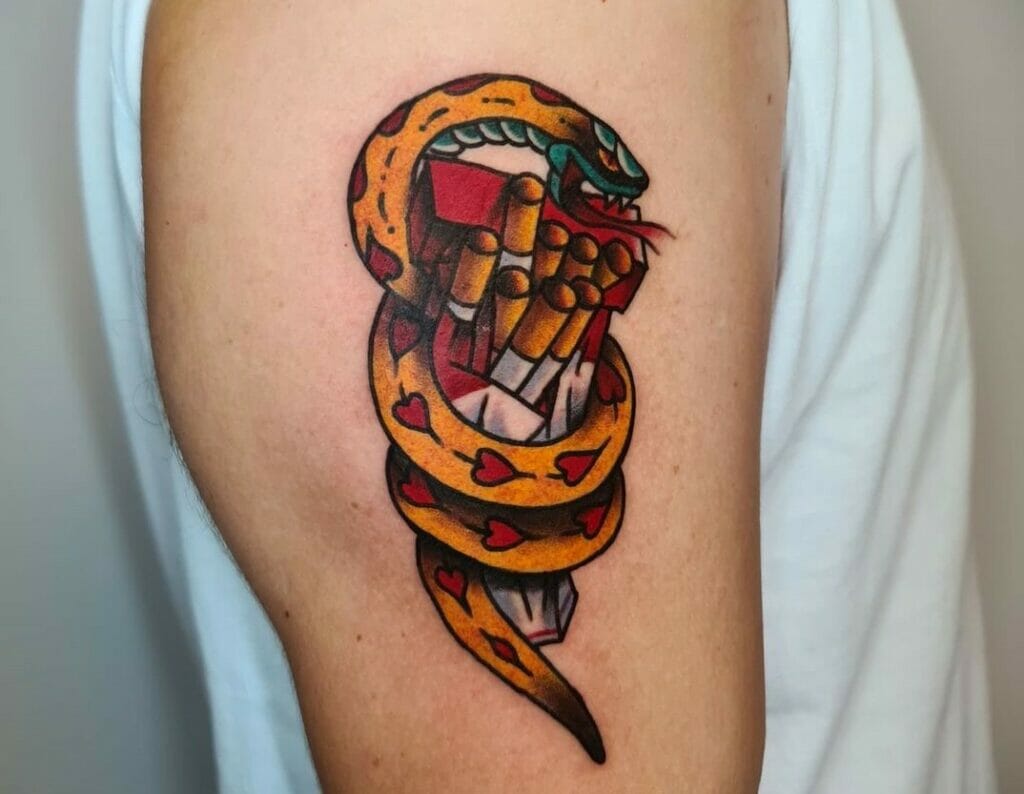 If you are a fan of the bold and beautiful Traditional tattoo style then these amazing Traditional snake tattoos are just what you need.

Traditional tattoos are very famous, and with good reason too.

Traditional American tattoos use bold black outlines and simple colours to bring out beautiful pictures. And one of the most popular types of tattoos amongst traditional tattoos is snake tattoos.

Snake head tattoos are very famous in the American traditional style. This is a very powerful yet small tattoo. If you have always wanted to get a bold and colourful traditional snake head tattoo, then this idea is perfect for you. It is not too big so you can wear this tattoo anywhere on your body. The symbol of the snake is very powerful and the fighting stance that the snake in the tattoo is wearing will look amazing. Though it is just the head of the snake, it is still dynamic and looks powerful.

Both skulls and snakes are very common in American traditional tattoos. And if you want to combine a skull with your traditional snake tattoo, then this tattoo idea is perfect for you. This traditional snake and skull tattoo is perfect for you if you love the traditional art style. This tattoo carries a lot of meaning as well. In Western culture, the images of a snake and skull together represent the idea of death and rebirth. Not only does this tattoo look cool because of the subject and art style but it also carries a deeper meaning. The idea of life and death represented in a tattoo is really awesome. Make sure to find an artist who can make this tattoo in the traditional art style and it will look really bold.

Like we mentioned before, snakes have had a lot of different symbols throughout history. In many cultures, snakes are considered sacred. Sometimes they represent life force and good luck and sometimes they represent deceit and temptation. Being something with so many contrasting meanings, it is no wonder snakes are a popular tattoo subject. If you have also wanted to get an amazing snake tattoo, then this idea is perfect for you. The clean, bold black outlines paired with bright colours and the flowers in the background really bring the tattoo to life. If you also want to get this amazing American traditional snake tattoo on your skin then find an artist who can make your dream come true.

The Japanese traditional tattoo style is as famous as its Western counterpart. The Japanese style focuses more on details and grace. This tattoo is as powerful as it is graceful. The art style is amazing and the background does not overpower the main subject of the tattoo, which is the snake. In Japan, snakes are an ancient symbol for waters and the coexistence of good and evil. However, this cool tattoo is pretty big and will take a long time to heal. We will suggest this tattoo for someone who already has experience getting tattoos on their skin. But if you do get it, it will look amazing on your thigh or your arm. Find an artist who specializes in the traditional Japanese tattoo style and get this awesome tattoo on your skin.

Snake and dagger tattoos are very famous in the American traditional school of tattooing. These tattoos represent triumph over obstacles and defeating evil. This amazing imagery of a dagger going through a snake’s head is powerful and symbolic of strength. Many people like getting dynamic tattoos like this. It represents the tenacity and willpower to defeat all obstacles in life. If you also want a tattoo with a strong meaning behind it then this tattoo idea is perfect for you. The details of this tattoo are amazing even though the colour palette is limited. It is bold and bright and powerful to behold. Find a traditional tattoo artist and you can get this tattoo on your own skin.

Roses, daggers and snakes are some of the most common tattoos done in the American traditional style. Snakes and daggers symbolise the triumph of good over evil. Roses also provide a beautiful contrast to this imagery. All in all, these tattoos are very famous and a lot of people get them because of their beauty and meaning. But as it combines so many subjects in such a bold style, this tattoo is quite big. It is not for you if you are looking for a small snake tattoo. But if you are looking for a stunning and bright traditional snake tattoo on your chest or your back, then this tattoo idea is perfect for you.

The Japanese tattoo style is pretty famous. And if you are also looking for a Japanese snake tattoo, then this idea is just for you. The Japanese symbolism for snakes is very important. Other than waters, women, and good and evil, in Japan, snake tattoos are also considered to provide protection against bad luck or illness. This sleeve tattoo is rife with designs and details even though it does not use too many colours. The snake also symbolizes a creative life force. But this tattoo is big and the healing time will be long as well. If you are a novice at getting tattoos then this might not be the best idea for you. We suggest these amazing sleeve tattoos to people who have experience in getting tattooed. This tattoo is rife with symbols and will come to life in the hands of an expert artist.

Medusa is one of the most famous characters from Ancient Greek mythologies. Many people love getting tattoos of Medusa as her character is both powerful and mysterious. It is said that Medusa was cursed by the Gods and has a head full of snakes instead of hair. She is also said to turn any man who looks into her eyes into stone. With such a powerful character and visual appeal, it is no wonder that people get so many Medusa tattoos. If you also want to get a tattoo of this ancient snake lady then this tattoo is perfect for you. Both the face of Medusa and the snakes are done in amazing detail. The colours are also very bold and the outlines of the tattoo are also perfect. The dynamic positions of the snakes seem to give them life. The face of Medusa is also expressive and the usage of bright colours brings the whole picture together. This tattoo is perfect for anyone who wants a bold Medusa tattoo. You can also get it in different colours and it would look amazing.

Snakes have a lot of different meanings throughout different cultures. In some cultures, they are associated with negativity while in other cultures they are associated with positive things like fertility and rebirth. The symbols vary from culture to culture. But since snakes shed their own skin, they are often a symbol of rebirth. This is why snake tattoos are so popular. This amazingly detailed snake and flowers tattoo are powerful and graceful at the same time. Transformation and beauty both are a part of it. The snake is detailed and graceful and the flowers accompany that image perfectly.

We already talked about the symbolism of snakes. The serpent is evil and deceitful in Christianity while in other cultures snakes are sacred and are associated with fertility, rebirth and have various other meanings. A lot of snakes like the Cobra have venom and are very powerful. All in all, the snake is very strong imagery when it comes to tattooing. But if you want a black and grey traditional snake tattoo then this idea is perfect for you. It still has the essence of the traditional style but is done in black and grey. You can also get other animals in the same style. This tattoo will look amazing on anyone’s arm or forearm.

Snakes are amazing animals and great tattoo subjects. If you are a fan of the Traditional art style and snakes, then these amazing tattoo ideas we listed are just for you. A few other snake tattoos are

If you want to get any of these beautiful tattoos on your skin then find a great artist and a safe environment and get tattooing!