10 Best Christian Half Sleeve Tattoo Ideas That Will Blow Your Mind! 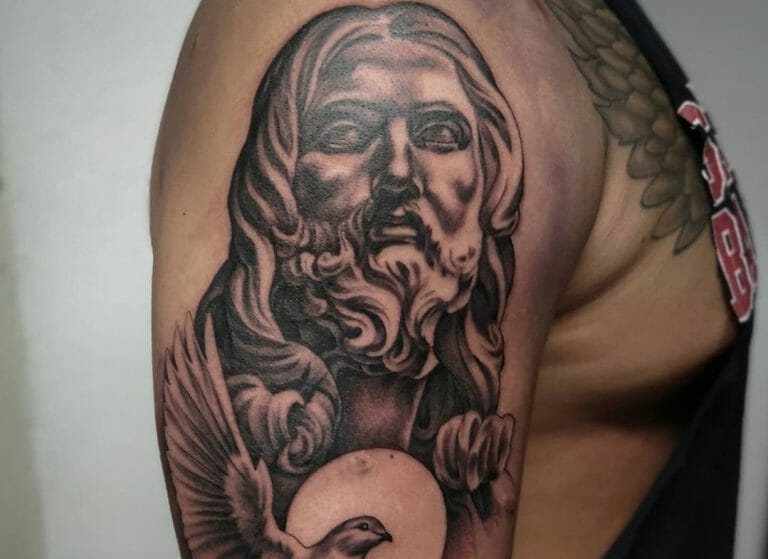 Half Sleeve Christian tattoos are a great way to show your love for Jesus Christ and the religious beliefs of Christianity.

Christian tattoo is not an embedded culture of Christian, but many Christians have devoted their time to get a Christian tattoo as a part of their religious life. There is no harm in doing that since tattoos, in general, are a way to appreciate your body as a canvas.

Half Sleeve tattoo designs are just as popular as a full sleeve tattoo, and there are many advantages of getting a half sleeve tattoo, mainly because of how it compliments your arm effortlessly. Many people prefer half sleeve tattoos because they cost less money, and you can upgrade to a full sleeve anytime in the future. It is also more suitable for people who are getting a tattoo for the first time. There are plenty of designs for Christian tattoos, like praying hands, a cross, or even the Bible, and if you are looking for such types of tattoo designs, then you will find them here. We have curated all the popular designs and highly rated designs that are proudly worn by people. Suppose they can look more attractive, religious, charismatic with an oozing personality, then what makes you not be like that. These ideas will literally blow your mind. Well, not literally, but you will definitely want to get these same designs tattooed as soon as possible.

Nun Tattoos comes in all shapes and sizes. While many Christian tattoo enthusiasts prefer a demonic nun tattoo design, there are still plenty of devout men and women who love the nun tattoo without any demonic aspect. This upper half sleeve tattoo Christian design looks clean and artistic. Nun tattoos hold religious symbols and powerful connotations for the holy visages. It is one of the unique looking half sleeve Christian tattoo designs. Nuns teach holy traditions to unfamiliar people and are a big part of Christianity. They are basically the mentor for catholic students, so if you are someone with a history similar to that where you were taught about Christianity by a nun, then you can check out this tattoo.

Virgin Mary plays a very important role in the Orthodox Christian realm. According to Orthodox traditions and its Bible, Mother Mary is considered to be a “God’s bearer”, so there is no doubt that orthodox Christians puts Mother Mary on a higher pedestal. This tattoo will entrust your beliefs for God’s Bearer, and in modern artistic perspective, it will look outstanding on an upper arm. The crown of mother Mary shows a powerful significance as she is the one who gave birth to the almighty Jesus. The black ink used in this tattoo really compliments the whole art, and you should definitely consider getting this one. You can get this design on other parts of your body, and many people usually do that, but it does not mean that this tattoo will not look good on your arms.

Jesus With The Crown Of Thorns Tattoo

This Jesus tattoo captures the perfect moment of the sacrifice he had to make for his people. The Bible says that God had sent Jesus so that he could make humans believe in his faith. Jesus crucifies himself for the sinners (humans), and that exact meaning is depicted by this simple looking Jesus with the crown of thorns tattoo that will bring God and his religious royalty every time you look at it. This is one of the more popular or perhaps more common Christian sleeve tattoos that are perfectly suitable as a half sleeve. Jesus with a thorn symbolizes the great sacrifice which will never be forgotten. It is arguably the most important element of the whole Christianity as a belief.

The whole persona of these types of Christian half sleeve tattoo designs is to look aggressive, which is just the way the artist intended. A bold and big cross design and an artistic lion in the middle almost makes it a renegade design. But that is not the case, and many holy visages prove to have this religious tattoo as one of the most prominent Christian art. Cross with Lion tattoo can have different meanings, just like many other tattoos among Christian art.

This is another great Christian tattoo for people who are looking for religious tattoos. The clear pathway design at the bottom part of the tattoo is the main objective of Christianity that all devoted men and women carry. It is the way to the eternal heaven, which can be seen as the flower shown in the tattoo right above the cross. This, in turn, reminds us of the sacrifice of Jesus. It is made with black and grey ink which is the way to go for a cross tattoo. It almost looks like a sketch made by a great artist.

Jesus tattoos are always the first choice for many tattoo lovers, especially those who are into religious tattoos. This tattoo design consists of two major elements in the Christian religion, and that is Jesus on the cross and a massive lion design. The whole tattoo design in itself is unique; the all-black colour ink for this tattoo design is one of the most utilized tattoo ideas. The praying hand is a symbol of faith and inspiration that directly links to the importance of Christian tattoos ideas as body art. Cross tattoo as the half sleeve is arguably the most popular type of Christian tattoo in the world.

Lion and Christian element designs are some of the common Christian tattoo designs. When it comes to Christian half sleeve tattoo drawings, lions play a significant role in it. This tattoo is suitable on the lower part of your arm rather than the upper arm, as you can see in the picture. The lion art is very detailed, with a different ink used for the eyes rather than just a regular classic black ink. At the bottom of the tattoo design, you can see the three cross tattoos that represent Jesus Christ and the two thieves who were crucified on the hilltop of Golgotha or Calvary Hill. It is a place that is popular worldwide, especially among Christian people.

Bible is the holy book for Christian, and it mentions the importance of the mother of GOD. This type of tattoo idea is for people with faith who believe that God is greater than the highs and lows. Tattoo with religious inspiration is immense among the Christian world. It is a fairly simple looking Christian tattoo of the mother of Jesus Christ. People who don’t want anything fancy or over the top looking can go for this lowkey design and different designs with similar elements.

This tattoo is probably the most solitary looking design among all the religious tattoos shown on these sites. The native aspect of this design, in conjunction with Christianity, takes it to another level. This tattoo design is even suitable for leg sleeve tattoo men and women would love and good enough for a full sleeve design if you add other elements to fill up the arm. The woman holding the cross is a symbol of faith, and some would say that the woman in this tattoo has a resemblance to one of the angels. This powerful design empowers people from all around the world of not only this religion but of other religions as well.

The main aspects of Christianity symbolize many things, and it reflects on the true nature of God’s followers as the same is also written in the Bible. The Bible also covers all four archangels that one should look up to. Reputable and skilled tattoo artist generates their ideas for Jesus tattoo and God tattoos from well-recited bible verses and their corresponding meanings. Tattoo ideas like the cross tattoo are one such example, and we have a few of these half sleeves tattoo designs on our list as well. However, if you are still keen to look for other options, then you don’t have to go anywhere else because we also have several other half sleeve religious tattoo ideas as suggestions.