10 Best Traditional Japanese Tattoo Ideas You Have To See To Believe! 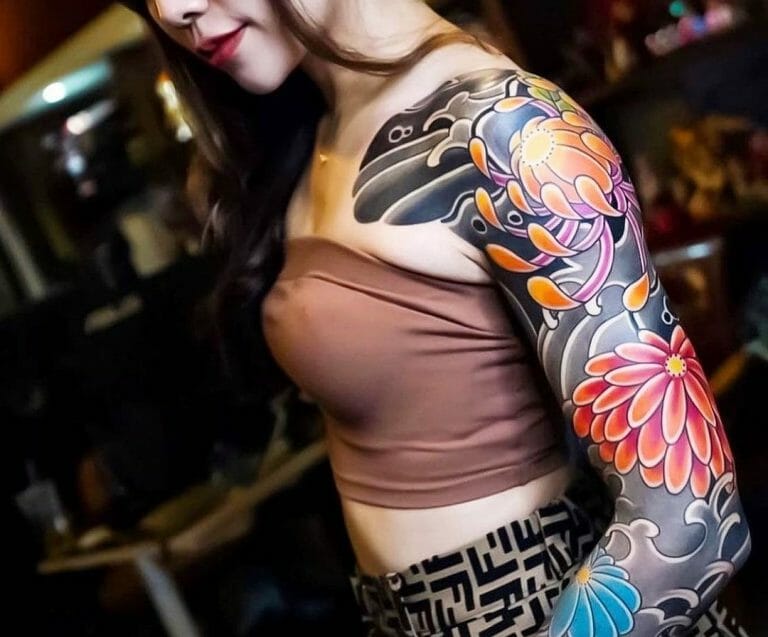 Irezumi is the art of traditional Japanese tattooing.

Japanese traditional tattoos include several exciting elements such as the koi fish, samurai, etc., that speak volumes about Japanese culture.

Irezumi tattoos are large colorful tattoos that include elements and characters inspired by Japanese folklore, mythology, or the Edo period in Japan. Such tattoos hold symbolic meaning and use bright colors. They are made using non-electrical tools, such as a bamboo stick. They give an insight into the ancient art form of Japan and are a favorite among tattoo enthusiasts. However, this wasn’t the case in old Japan when it faced suppression and dealt with sin and corruption. Anybody having a tattoo was associated with the Japanese mafia, also known as Yakuza. Later on, a full-body tattoo was called a yakuza tattoo and was looked at with suspicion and dislike. Since a lot of detail is involved in these tattoos, a common question arises: How long do traditional Japanese tattoos take?  The time factor depends on your tattoo artist and the design you choose. A smaller tattoo will take 3-4 hours, while a larger one covering more areas might need several sessions to be fully completed.

The primary subject matter of this tattoo is a tiger. Bright colors have been used to highlight its features, making it stand out amidst the black background. On the bottom right corner is a demon-like creature, and these two elements give the tattoo its symbolic meaning. This tattoo is a pure form of Japanese art and is greatly inspired by Japanese culture. Tiger is an integral element of most traditional Japanese tattoos and is believed to bring good luck and ward off evil spirits. Since this design is a bit intricate, you would have to give enough time to your tattoo artist to finish it. You can also play with the colors of the tiger or add some more detailing into the design. This japanese traditional tattoo sleeve is a favourite among animal lovers.

The primary colors used in this tattoo are red and black, with a hint of yellow here and there. The tattoo here portraits what we can perceive as flowers among waves. This is a Hori tattoo, a traditional Japanese tattoo name used by artists to mark their profession. Usually, Japanese wave tattoos represent strength and fluidity, and flowers in Japanese tattoos represent perseverance. The colors black and red have been used with great expertise, and the few spaces left among the black waves in the tattoo have created a fantastic contrast bringing the tattoo to life. The red flowers add a specific effect to the overall image of the tattoo. You could also replace the red color for a different result. Undoubtedly one of the best Japanese traditional tattoos we have seen!

This tattoo uses a palette of colors and has several Japanese mythical creatures and elements all packed together. This tattoo symbolizes protection and is believed to drive off negative energy. Chrysanthemums and several other flowers are present throughout the procedure. While some of these flowers don a shade of pink, the rest are either plain white or grey-blue. Color symbolism is often seen in Japanese tattoos. For example, red depicts joy. Gold represents power and blue is used to denote fertility. White represents mourning as well as new changes. Green is used profoundly in Japanese tattoos and is associated with nature. If you are looking for a striking and meaningful Japanese tattoo, this is the design for you.

Japanese Tattoos With The Crane

Cranes are believed to be a sign of long life, health, and peace. In this tattoo, the feathers and the bird’s body are mainly black with a touch of yellow at some places. The middle portion of the body just below the neck has been colored in a light blue hue. The beak and legs are yellow as well. A cherry blossom is seen next to the bird in a beautiful pink color with white touches. Underneath the right wing of the bird lies a giant rose, colored in red. Its leaves can be seen peeking from below, and it adds some floral essence to the tattoo, along with the cherry blossom. The flight motion of the crane has been perfectly expressed here. The minute detailing on the feathers is genuinely remarkable.

This stunning Japanese traditional sleeve tattoo is ideal for those who want large tattoos without making the design look too crowded. Here, the cat is seen hanging from a bit of branch and is wearing a cute head wrap. Its fur has been shown with the help of curved lines, and there seems to be a bed of flowers and leaves below its feet. A design on its stomach represents the Shinto Gods and has been designed with excellent features. The cat is a unique Japanese folklore reference and symbolizes good health, luck, and power. This tattoo shows the cat as not just an animal but also a powerful entity. Cat lovers, we know you can’t wait!

This design is that of Hyokotto- a famous comedic character in Japanese folk culture. He wears a mask over his face accompanied by a printed scarf. The mask is characterized by big eyes and a pointed chin, giving it a very comical appearance. The wrinkles on his forehead have also been shown in this design, which explains his age. Hyokotto is a symbol of success and happiness. The character’s bushy brows and mustache have been demonstrated with great detailing here. The pointed shape of the chin is due to smoking a bamboo pipe. The female version of this mask is called’‘Okam’’ and can be an excellent alternative option. While this is a monochromatic design, you can consider getting this whimsical character with bright colours to make the design more appealing. This is a unique type of traditional Japanese tattoo for those who love to go for an out-of-the-box design.

Floral tattoos can never get old. Each flower holds a different meaning and is unique in its way. They are prevalent among the Japanese people and are believed to bring good health and luck. This design is mostly in black but has a hint of pink at a few corners. There are many waves above and below the flowers and form an essential part of the design. A lotus tattoo is also a good option if you want to go floral. Cherry blossoms can be added as well to give it a soft appearance. If you want a more colorful tattoo, you can surely add some light colors as per your preference. However, this version looks the most simple. Getting a Japan-themed tattoo done by Japanese tattoo artists can be an added advantage to create the ideal tattoo you will love!

The Chrysanthemum is a trendy flower in Japan and symbolizes the power and determination of a person. This arm tattoo heavily adorns a large Chrysanthemum colored in the vibrant shades of red and orange. There is also some usage of black and white in the surrounding petals, and every petal is outlined in black, thus giving it some extra graphic effect. Two shades of red have been used in the design, making it look all the more realistic and attractive. This Japanese tattoo design can be worn on the arm or the leg and is best suited for those who want a bright and colorful tattoo. Chrysanthemum is not a pretty common flower for tattoos, which would undoubtedly add some subtle uniqueness to your design. This tattoo is perfect for first-timers who don’t want to try out any exotic methods.

Samurais were a symbol of strength and bravery in old Japan. They were warriors and were always portrayed with swords. Even in this design, the samurai has been depicted with a sword in his mouth. There is an abundance of the color red here, and it has been used in the face of the samurai, his headwear, and his sword. There are a total of five flowers in the tattoo, all of which are red as well. Their leaves have been tattooed in black, and the headwear deserves special attention for its exemplary work. The tattoo is rich in tradition and is undoubtedly one of the most exemplary design ideas on our list. Make sure to consider this tattoo art for your traditional Japanese sleeve tattoo.

Koi fish tattoos are mainly symbolic of tenacity, determination, and good fortune. The koi fish scales have been colored in black and grey, and there are small black spots on the skin. The lower side of the stomach is shaded using pink and grey. The fins, tail, and mouth lining are all outlined in yellow to make the design pop out. A few bubbles are seen emerging from the mouth of the fish. There are some leaves in the area surrounding the fish, which are colored in dark green. The puffy effect of the belly has been done with quality shading. The position of the leaves looks just perfect. This is an example of a Japanese neo-traditional tattoo as it uses modern techniques to create the overall detailing. This design can also be used on the arm with similar results.