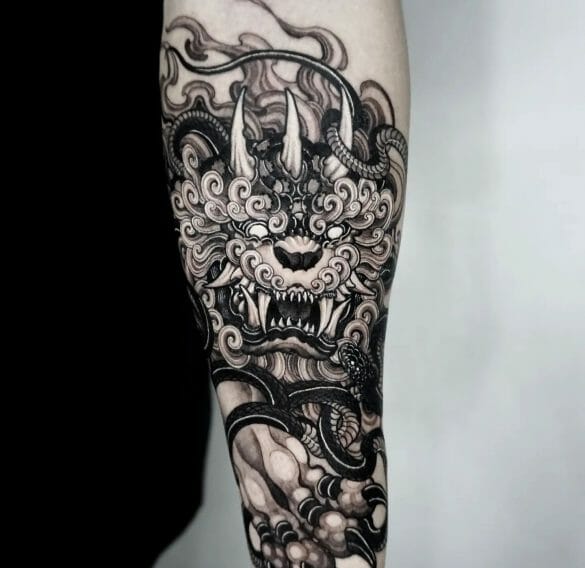 Fascinated with oriental tattoo tropes? It might be time to move beyond dragons and try out a traditional foo dog tattoo on your skin!

A foo dog is one of the most prized mythical creatures in Asian countries.

In Chinese history, foo dogs were originally adopted by the royal family and showcased as a symbol of imperial power, positive energy, and spiritual strength. Similarly, the Japanese refer to foo dogs as protector lions who ward off negative energy.

The Han dynasty of imperial China witnessed a great influx of lions who were often exchanged as valuable gifts amongst royal families and elites of the society. These lions were introduced by the travellers of the Silk Road and readily became a popular image of loyalty, ferocity, and spiritual energy. Soon these imperial guardian lions were cast into marble and granite statues and placed in front of important buildings, temples, and homes of prestigious members of the society.

These Chinese guardian lions also made their way to Japan during the Edo period where these magnificent creatures were believed to represent the Buddhist idea of reincarnation. Foo dogs were also considered to be Buddha’s lions thereby establishing them as a symbolic representation of divine protection and bringer of good fortune. These stone lions were thus mounted on top of government buildings, Buddhist temples, and the entrance to an important structure.

A decidedly positive symbol, foo dogs or guardian lions are an extremely popular trope amongst tattoo enthusiasts. There are myriads of techniques and designs that you can implement in drawing these dog breeds. Feel hyped up yet? Find below some of the many popular traditional foo dog tattoo designs and get set inking!

Foo dog tattoos are best exhibited in sleeves for the area and spotlight that the site offers. Here, the tattoo artist paints a classic black and grey foo dog in Japanese style. Features of a Japanese tattoo are highlighted with bold black outlines and contrasting subjects from the background. Even though fully composed in black and grey, this foo dog tattoo is enough to draw attention with its intricacies. The Hannya mask at the bottom helps to accentuate the ferocity of the design, meaning that the wearer is capable of protecting themselves and their loved ones from negative energies.

The more commonly seen representation of Japanese tattoos is through the use of bright colours against a black and grey background. Here, the radiant blue and golden on the foo dog’s body brings about the classic Japanese Irezumi, simultaneously underlining the many details on the foo dog.

Foo dog tattoos appear absolutely menacing when placed on the hand. The black and grey foo dog here gets tweaks of red highlights in its eyes to portray the guardian lions that they really are. Chinese foo dogs with their open mouth denote protection from evil spirits and bad luck. The open mouth is generally attributed to the male foo dogs who are malevolent icons of strength, while the closed mouth of female foo dogs represents benevolence and keeper of good luck.

The colour gradient on this foo dog tattoo is bound to get all eyes on you! The generous distribution of gold and purple on this guardian lion is further piqued by the shading methods. Though hand tattoos make a stunning appearance, keep in check your pain tolerance level for these are infamous for being torturous!

The imperial guardian lions make great tattoos on the chest. Foo dog tattoos are usually inked in pair and require more space to fully bloom. Naturally, the chest and back are ideal picks for getting a foo dog tattoo. Here, the artist draws a lion dog right below the sternum. The foo dog seems inflamed with the bright orange colour against the light green face.

If sternum tattoos are not your thing, opt for a side chest foo dog tattoo that extends to your upper arm. Here the artist adheres to the traditional Japanese tattoo techniques and contrast colour pallette, but the beauty of the design lies in its placement of the lion dog. You can place a male and a female foo dog on each side of the chest to get a comprehensive picture of the creatures.

Moving away from the style of quintessential Asian tattoos, this foo dog tattoo is more of an abstract Western representation of the Chinese guardian lions. Seemingly an American traditional foo dog tattoo, the design banks on contrasting shades and bold black lines. This abstract portrayal of the foo dog’s body is also indicative of the creature’s popularity in the West.

Instead of going about the traditional foo dog tattoo outline that encapsulates the stature of stone lions, try and experiment with more contemporary perspectives and ink them in the traditional techniques. Sounds fun, right? This method offers more agency to play with Asian symbols without hampering their cultural connotation.

Japanese foo dog tattoos, like other oriental tropes, are often inked in glorious fashion. But a large tattoo is not the only way to get these imperial lion tattoos. Instead, opt for forearm foo dog tattoos that keep the essence intact without taking too much space. The tattoo artist here inks a full male foo dog with its mouth wide open. The beautiful blue colour and spiral lines are enough to denote the Irezumi style of Japan.

Or you can paint a black and red foo dog tattoo on your arm as it is shown here. The artist uses black predominantly to create a traditional Japanese foo dog and careful shading to distinguish the patterns on the body. You can either ink your foo dogs separately or bring both the male and the female and present them as a pair like is traditionally seen in feng shui and the statues in China.

Get yourself an old school Chinese foo dog tattoo that portrays these imperial lions in their absolute best. Chinese statues showcase such grand and intimidating figures that calling them dogs seems like an understatement. Here, the design captures the true essence of the Chinese belief and presents a large picture of the lion tattoo. Coloured in grey and red, the beauty of the tattoo comes to life with contrasts. You can get this foo dog tattoo on your chest, back, or even on the belly as is shown here.

Taking it a step further, this foo dog tattoo incorporates the popular colours and symbols associated with Japanese tattoo designs. In Chinese statues, the ball that the foo dog holds in its paw is an emblem of the earth, meaning that the male fu dog with its mouth open strives to fight off evil in order to maintain a harmonical balance in the world. Similarly, the female foo dogs possess a cub in her paw to symbolise maternal instincts and protection of good luck.

Perhaps the most popular exhibition of the Japanese Irezumi technique known to tattoo enthusiasts, this foo dog tattoo on the back presents all the quintessential elements of Japanese in a composite form. The bright coloured foo dog is introduced against a coiled black background. Peonies are often placed alongside foo dogs for they add a touch of softness to an overall ferocious picture of the guardian lion.

Similar to peonies, the lotus flower carries spiritual connotations. The lotus is a symbol of purity, faith, and spiritual awakening. The flower is often associated with Buddha and the idea of reincarnation. Here the lotus is placed on top of the blue foo dog tattoo to highlight the Chinese beliefs regarding these guardian lions. Filled with layers of meaning, these foo dog tattoos will be a head-turner no matter where you place them on your body!

If you have a penchant for tattoos on your feet, these fu dogs will be your guides! The artist picks a foo dog head and colours it with intricate dotwork. Note that the use of red and yellow are purposefully kept low to present a sombre picture of traditional Japanese tattooing. The tattoo will advocate the wearer as a serious and responsible person with a strong temperament.

A more tribal representation of the guardian lion here, this foo dog tattoo wraps around the ankle like an anklet. Given the scarcity of the site, the tattoo features only the face of the lion from jaw above. Black and grey with definite outlines serves to demarcate and accentuate the features of this foo dog tattoo. The touch of colour is efficiently put without going overboard with the design. Foo dog tattoos on feet are especially beneficial if you want to carry the protective spirit without drawing too much attention. You can also experiment with colours as per your liking but keep subtlety in mind.

Traditional Foo Dog Tattoo On Back

Yin Yang is a recurring symbol often associated with foo dogs. In China, the foo dogs are modelled in such a way that both the female and male foo dogs complement and contrast each other. The male is seated on the right, denoting an active force of strength and ferocity, while the female is on the left to maintain the pristinity of the place.

This tattoo represents the two foo dogs surrounding the Yin Yang symbol. The creatures are plainly drawn with black outlines and some dotwork. You can utilise colours or further intensify the use of black and grey to make the tattoo pop up.

Most foo dog tattoos are intimidating designs that try to capture the zeal of the marble statues. But with neo-traditional school of tattooing, there is a lot more room to unleash your creativity! This foo dog is more of a unicorn lion with all the amalgamation of all colours of a rainbow. The style is cute and compact and can even be worn by women!

One of the tell-tale signs of neo-traditional tattoos is the overt use of bright colours. Here the male foo dog is coloured wild from head to toes with little to no association with the original depiction. You can either go with one or ink a pair of foo dog tattoos to complete the entire picture.

Despite their scary appearances, foo dog tattoos are nowhere close to being crooked. Ancient emperors relied on these guardian lions to protect their palaces and the prosperity of the kingdoms. Though first originating as Chinese tattoo designs, foo dogs are now immensely popular in the tattoo community of Japan. So whichever style you choose, the meaning will only be of positivity and strength. Foo dog tattoo wearers are thus viewed as strong individuals who can look after themselves and their close ones. Given below are some more suggestions on how you can style a foo dog tattoo with different tropes and symbols: