10 Best Japanese Crane Tattoo Ideas You Have to See to Believe! 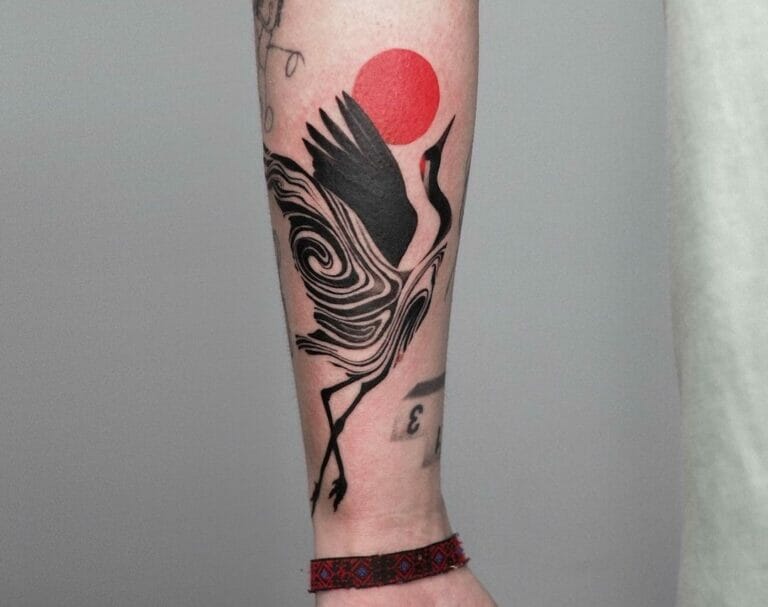 The Japanese crane, or Tsuru, as it is known locally is one of the rarest species of cranes that are endemic to Japan.

Throughout Asian culture, the bird is one of the mystical or holy animals alongside the tortoise and dragon and is seen as a symbol of love, good fortune, eternal youth, and happiness. In Japan specifically, these cranes have been a part of art and culture as seen by their presence in Haiku poetry as the subject.

This Japanese bird inhabits the northern island of Hokkaido, Japan, but have over the years lost their thriving population due to loss of habitats which are a direct result of human interference. In the Japanese culture, the crane is believed to live for over 1,000 years and will provide favours in return for sacrificial acts.

Japanese cranes have been a part of the culture as these birds have been used on the crests of Samurais. These birds are considered to be “birds of happiness” because of their link with good luck, longevity, and harmony. Since these birds are monogamous they are often imprinted on wedding kimonos, or the Uchikake, a decorative kimono that goes over the actual kimono, where they are embroidered.

In Chinese culture, the crane has a different symbolism as they are symbols of longevity, auspiciousness, and a soaring spirit. Cranes have been a part of their art and culture for centuries and can be found in ancient paintings and traditional clothing.

Minimalistic tattoo designs are an example of how a tattoo artist can take common designs and turn them into eye-catching designs by going against the common designs that include more details in them by using as little detailing as possible.

This tattoo design is perfect for people who want tattoo art that captures the essence of the design with minimal use of black ink and still manages to capture the beauty behind the tattoo designs.

A crane bird tattoo like this is a great idea as it narrates the crane symbolism of mythical value as the crane keeps its head held high and wings stretched ready to takeoff.

Crane tattoos like this design are perfect for both men and women who want to step out of their comfort zone in life and clash with the world for their beliefs.

Geometric tattoos are the rendition of perfection due to the time and effort a tattoo artist puts into the design.

This crane tattoo idea is among few tattoos that combine several elements into the tattoo, all of which have their specific meaning in Japanese culture.

Tattoos like this are usually divided into sections that come together to form a meaningful tattoo. In this tattoo, the Japanese crane bird stands at the top with the lotus under it and the koi fish under the lotus. Cranes, as aforementioned, are the symbol of hope, prosperity, good luck, and longevity.

The lotus flower is a symbol of purity as the flower is famous all around the world for its ability to bloom into a beautiful flower even though it blooms from the mud. Lotus is used as a symbol of perseverance and enlightenment as they teach people to live life to the fullest.

The koi fish is closely related to the Japanese culture as its national identity and has been a part of the rich history of the country. This fish is a symbol of prosperity, luck, hope, and good fortune.

Combined, the crane, koi, and lotus can be an amazing tattoo idea that you can flaunt!

After the end of World War 2, the Japanese crane bird became a subject of origami, the art of paper folding, and was seen as a symbol of harmony, hope, and peace. In Japan, the crane is often part of folklore and stories, one of them is that if a person folds 1000 origami cranes, the crane will grant them one wish. Today, this tradition has become popular as people all around Japanese islands fold origami in the shape of these birds and gift them to friends and family as a blessing to bring longevity and success.

This crane idea is one of the best origami tattoos that you can get yourself inked with. However, if you are not satisfied with the base design, you can always ask your tattoo artist to make changes to it, like adding other colours to it or adding more paper cranes to the design.

Crane tattoos are often kept simple and clean and usually avoid being colourful as cranes are also a symbol of simplicity. However, just because some bird tattoos are colourless, doesn’t mean all tattoos have to be colourless.

This colorful design is visually stunning thanks to the standing and soaring cranes in the design that are inked to perfection. The water body, sun, clouds, and red sky are amazingly drawn by the tattoo artist as the cranes give off a soothing feel to the design and just look perfect.

Crane tattoos like this can be a great addition to the bodies of men and women as a symbol of serenity and calmness.

Japanese crane tattoo designs are famous for their simplistic and on-point presentation and this tattoo idea shows how these designs don’t require too much work on them as the meanings behind the designs can be easily interpreted with basic designs.

This tattoo idea uses a crane soaring through the sky with a carefree and composed nature. The red object behind the bird represents the Japanese flag as the sun is the symbol used in the flag.

This tattoo idea is best suited to the arms, but if you want to change the placement of the crane tattoo, then you can easily look for more Japanese crane tattoo pictures and images on the internet for an alternative placement.

The crane bird is also a symbol of fidelity due to the monogamous nature of the bird. Dual Japanese crane tattoo meaning can also be interpreted as faithfulness to yourself as you make decisions that are the best for your well-being.

Even though this tattoo idea is a “his and hers” concept, you can easily get it inked as a solo tattoo that comes with two cranes.

This bird design is drawn to perfection and uses minimal colouring as it uses only black ink to get the best result out of the idea. If you are someone who wants a symbol of faith in yourself, then this crane tattoo can be perfectly suited to your personality.

Tattoo ideas with frames have garnered a huge fan following over recent years due to their stylish look that can even make the simplest of designs pop. This tattoo idea is among some of the few tattoo ideas that perfectly fit the concept of a framework.

The soaring crane bird is neatly drawn and it is surrounded by clouds as it soars through the sky and reaches for the bright moon in the sky.

A crane bird tattoo like this idea can be used as a symbol of independence as it captures the essence of the crane bird flying nonchalantly in the sky minding its own business and looking amazing while doing so!

The perfect placement for this tattoo is usually the neck, but if you want to switch it around, you can get this inked on your arms, legs, or shoulders.

The Japanese crane bird is known for its flamboyance as it performs courtship dances that comprise head tossing, leaping dramatically into the air, and flapping of the wings. This performance is in some instances, used to thwart off predators or can occur for no reason whatsoever.

This tattoo flawlessly embraces the flamboyance of the crane bird with its wings stretched out as it performs a dancing ritual with a beautiful background that further increases the beauty of the tattoo idea.

If you are someone who lives your life in a flamboyant sense, then this crane bird tattoo will be a great addition to your body as a symbol of your extravagant lifestyle.

Getting tattooed on the back is not for everyone as it requires a certain amount of swagger to pull something like this off. Back tattoo ideas have become a symbol of confidence over the years due to the huge amount of skin they acquire and the effort that goes into creating them.

A design like this is a huge commitment as it covers your entire back with its intricate design that includes two large birds flying with each other as the national symbol of the Japanese flag can be visibly seen as the background or frame that the bird is engulfed within.

The colour work in the tattoo is perfectly balanced and does not overpower the crane bird portraits as these flawlessly become a part of the red Japanese flag symbol.

Tattoo ideas like this are only suited for the back of the body due to their size and will not be a good look if it is done on the chest.

This tattoo idea is absolutely stunning to look at because of the amazing effort put into the design by the tattoo artist. The design is a great rendition of everything that is associated with the Japanese culture as it incorporates the popular sakura or cherry blossom tree after the tree has gone through the blossoming stage.

The portrait of the bird is the centrepiece of the design as it strikes a perfect balance between the sakura tree and the serene background behind it. Designs like this are undeniably eye-catching and head-turning as they make the best out of the concept they are based on and further better the concept through the use of minimal colours and intricately drawn portraits.

Here are some recommendations to go along with these designs: