101 Best Japanese Phoenix Tattoo Ideas You Have To See To Believe! 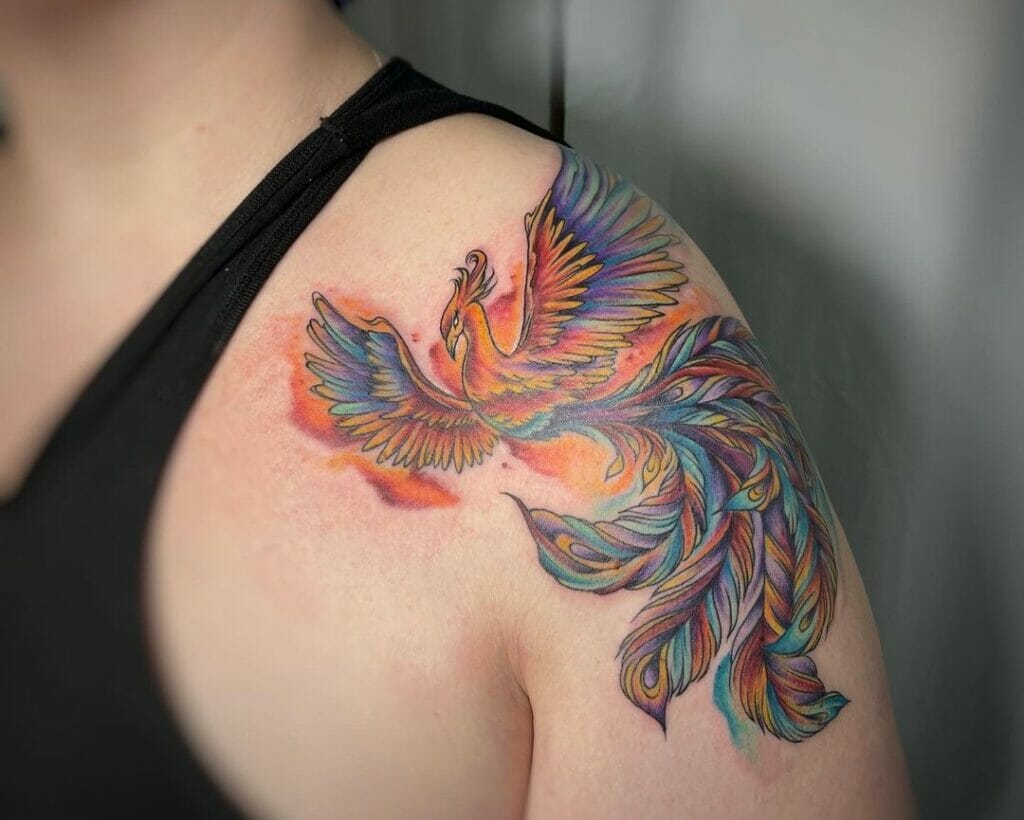 Looking for some cool inspirations to ink the symbol of virtual and grace? We are here to help with these 10 cool Japanese phoenix tattoo ideas.

“Hope rises like a phoenix from the ashes of shattered dreams.” – S.A. Sachs.

Although associated with the sun god, the phoenix bird is more widely known for its striking beauty and ability to rise from the dead. While a Fenghuang (or Hou ou), the Japanese phoenix, along with its mystical powers, symbolize purity, virtue, mercy, duty, propriety, and credibility.

The Japanese phoenix, in Japan, symbolize an imperial household. It is not just any phoenix with its legendary beauty and power, but also, according to Japanese folklore, a representation of the union of yin yang, with yang being the male Feng and yin being the female Huang and together they portray the eternal beauty of love and unity. Japanese tattoos were originally used to depict societal status and among the most popular Japanese tattoos, the Japanese phoenix tattoo is a great idea if you want to bring out your inner indestructible perseverant. With features like a pheasant’s neck, the long tail feathers of a peacock, and the mouth of a parrot along with a plumage full of fiery colours, you can ink these tattoos onto your body to invigorate the fire within you most creatively and boldly. In Japanese folklore, this bird is often represented alongside a dragon and is incredibly versatile that you can style on any part of the body and still ends up looking strikingly beautiful. Here are a few Japanese phoenix tattoo theme inspirations to style your body with to ignite the fire in you:

Nothing in the world can complement each other the way a Dragon and a Phoenix do and are a go-to preference for many men and women. The dragon being the symbol of vigour and fertility while the phoenix symbolizes splendour and beauty which together can bless with a positive energy bringing longevity and happiness into married life. The phoenix and dragon tattoos are a very common combination that phoenix tattoos admirers often opt for.

In this tattoo, the artist very creatively brought out the beauty of the union of the dragon and the majestic bird by creating a contrast using red and black ink.

In the other example below, the artist incorporated the bird and dragon along with a yin yang symbol. This tattoo shows the dragon burning down the phoenix as the phoenix rises from its ashes. These yin yang examples can be a great inspiration for your new ink adventure.

Tebori is a traditional Japanese tattoo that involves hand tattooing using bamboo or metal with a needle tip and inking the traditional legend in this unique tattoo-making method can’t get any better. Tebori is surely time-consuming and painful, but the pain depends on the tattoo artist and the amount of time consumed, which is relatively longer than a tattoo machine.

As a symbol of the sun, the colours of the Japanese phoenix are bright and vibrant. The bird comes with a combination of red, yellow, orange, green, and blue. The phoenix is often depicted as powerful and given a grandeur stature through these colours.

Although the Japanese phoenix tattoo comes in vibrant colours, these tattoos will not even disappoint if it comes in a greyscale. The legends of the bird come from famous Japanese folklores and giving it a monochrome colour scheme will only make it look like it came right out of an old storybook.

Cherry Blossoms and the Japanese phoenix are both very important parts of Japanese culture, so why not mix them up to create a beautiful cherry blossom feathered phoenix tattoo. The cherry blossom (or Sakura) symbolizes renewal and optimism, and the artist used very clean lines to outline the bird and pink cherry blossoms to create the perfect representation of renewal and rebirth

The Japanese phoenix tattoo is incredibly versatile and came to go with any placements of your choice:

Legs tattoos are only gaining more popularity among Stigmatophiles with each passing day and the reason is quite obvious. They are bold, super cool, and always stand out from the crowd. A Japanese phoenix tattoo placement on the leg can never go wrong with all the colours and intricate designs. While you surely can choose to go for a colourful phoenix tattoo but even a monochromatic phoenix will also not fail to stand out.

A sleeve tattoo is the most common among both men and women and being a tattoo enthusiast checking out a blog on tattoo inspirations, I bet you too can relate why. A sleeve tattoo can be a great way to show off your personal story through tattoo in your way, which also means it makes a great pass for a Japanese phoenix tattoo to be inked on one’s arm. Show off your experienced hardships by spreading out your wings and let them see the phoenix rising from your ashes.

Chest tattoo symbolizes bravery and very often it is a sign of masculinity, strength, and power, and it would not be wrong to place a powerful figure like the Japanese phoenix chest tattoo. As shown in the image of the chest piece, it can also be combined with other powerful creatures such as dragons or snakes. Alternatively, You can also create something similar to the image below, where the Japanese phoenix tattoo starts on his shoulder and extends towards his chest.

Fun fact: A tattoo across the top of the chest is also called a Gorget.

Back tattoos usually represent the foundation of life, and they are generally very personal, as they are only visible to others under certain circumstances. Back tattoos are generally not inked as to show off but only when something is close to your heart and you don’t bother with any audiences. They are just there purely for having something precious imprinted on your body.

Back tattoos can be a great option for you to look out for if you want to keep your Japanese phoenix tattoo personal. These Japanese tattoos being as versatile as they are, can be placed anywhere on the back or even ink it all over your back if you want to do so. Alternatively, these too can be monochromatized and yet get yourself a cool new ink just like the image below.