10 Best Japanese Traditional Tattoo Ideas You Have To See To Believe! 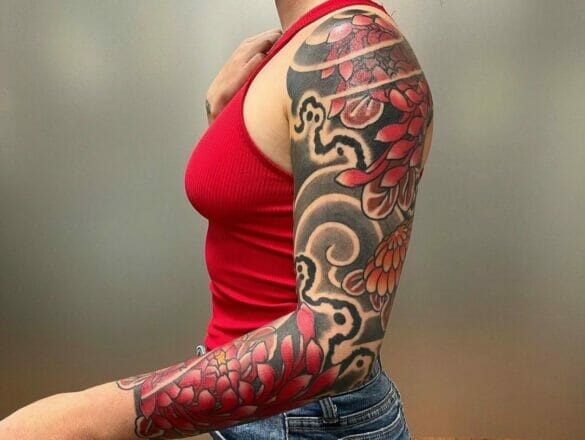 Traditional Japanese tattoos have an element of mystery and creativity in them. Take a look at this amazing collection of Japanese traditional tattoo designs before you get one!

These Japanese tattoo designs rose to prominence since the Jomon period of the prehistoric era in Japan. Japanese tattoo ideas are a combination of their myths and culture with the creative prowess of the tattoo artists.

Japanese tattoos are an illustration of the battle between beasts, the curse of a demon, or the spiritual enlightenment of a monk. Most of the designs are an amalgamation of more than one element of nature and each of them can be attributed to a multitude of interpretations. Apart from their cultural significance, these designs have a stunning look with elaborate detailing done throughout them. Japanese artists have been successful in keeping their tradition alive through these tattoo arts.

You can opt for a variety of designs to portray your Japanese tattoo in the traditional style. Here is a list of ideas that you can consider for your next ink.

Traditional Japanese Tattoo Of A Lantern

The glowing lantern is shining brightly on the chest of the wearer. The burning flames, inked in red, signifies its intensity. Moreover, the floral motifs along with the grey clouds create a beautiful backdrop in this tattoo. The artist has filled the gap between the designs with intense black ink to give a striking look. The wolf, inked on the arm, merges perfectly with the rest of the design. It is intricately drawn with great detailing and the crown of feathers on its head enhances its royalty. Together, the lantern illuminates the path of the wearer while ‘Okami’, the Japanese word for wolf, serves as the protector.

Here is another alternative to a Japanese lantern tattoo design inked on the arm of the wearer. The use of bright colours and intricate patterns brings depth to the artwork. The monochromatic roses in the background stand in contrast to the flames emerging out of the lantern. This traditional full sleeve tattoo inspired by the Japanese art form can be an excellent idea for your next ink.

Japanese dragon tattoo holds a significant place in Japanese culture and is attached to plenty of interpretations. You can portray these Japanese mythical creatures in a variety of ways according to your preference. Here, a monochromatic dragon tattoo is inked in fine lines using red ink. The wonderful cherry blossoms on the background add a unique twist to this tattoo art. The branches are emboldened in black while the vibrant flowers are inked in a bright pink shade. Your back will be the perfect canvas to portray this stunning Japanese dragon tattoo.

The terrifying dragon is intricately inked in black ink with great detailing on the back of the wearer. The pointy fangs of the creature are visible in its mouth with its tongue emerging out of it. Moreover, the pair of flowers on the side add a feminine touch to the fascinating artwork. According to Japanese tradition, the dragon is believed to bring good luck to the wearer by warding off evil spirits. You can also alter the size of your traditional Japanese dragon tattoo design according to your preference.

If you wish to go for a traditional Japanese snake tattoo with an essence of femininity then you can opt for this one. Here, an enticing snake is coiled around a gorgeous peony flower at the centre. The beautiful blend of colours in the entire design is done with perfection. The combination of blue and red ink bring a luminous glow to the design. ‘Hebi’, the Japanese word for snakes stands as a symbol of wisdom and good luck. However, the union of the snake and flower represents the duality between beauty and lust. This gorgeous Japanese tattoo design will surely amp up your style quotient.

Here is another great alternative to a fusion snake tattoo design that will look great on both men and women. Here, a venomous snake is coiled around a bunch of sunflowers. The greenish tint on the snake’s skin stands in contrast to the bright yellowish petals of the sunflowers. The intricate patterns on the skin of the snake beautifully highlight the entire design. According to Japanese culture, snakes are also considered to be the protector of wealth and treasures. You can place this Japanese tattoo along the length of your leg or arm.

Koi fish is a popular subject when it comes to Japanese style tattoos and holds a special meaning in Asian culture. Such tattoos are mostly paired with sea waves and floral motifs to enhance their striking appearance. Here, the koi fish is beautifully shaded in a red tint while the red flowers bring an artistic touch to the entire design. Moreover, the ripples around the koi fish are inked in Japanese style with contrasting black ink to add depth to the artwork.

If you are looking for a traditional Japanese sleeve tattoo of a realistic koi fish then this is the one for you. A golden koi fish is inked along the arm of the wearer with waves at the bottom. The striking blend of colours adds a hint of realism to this Japanese tattoo art. Perhaps, the fish is moving downstream that is in the direction of the flowing water in the stream. Since koi fish is associated with perseverance and therefore if it is flowing down the stream then it symbolizes that the wearer has already dealt with the struggles in their life.

Tiger is revered as a powerful element of nature and the ruler of the cosmos in Japanese tradition. Here, the tiger is inked with the classic orange with black stripes on its body. A small turtle is present at the bottom of the design. You can also combine a roaring Japanese tiger with a fiery dragon to enhance the meaning of your Japanese tattoo design.

This intriguing tattoo depicts a skull biting a conspicuous flower with a serpent emerging out of it. The skull has been inked in monochrome with detailed shading while the rest of the design is filled with vibrant colours. The forked tongue of the snake, emerging out of its mouth, brings a dramatic touch to the design. This tattoo art is an amalgamation of three different designs in one frame. The tattoo artist has created an artistic masterpiece by perfectly inking this beautiful artwork.

A scenic full sleeve floral tattoo is quite popular in Japanese tattoo culture and looks absolutely stunning on the wearer. It seems like the butterfly is lost in a field of chrysanthemums and maples. The beautiful butterfly with its shining red wings looks prominent amidst the monochromatic flowers. The flowers are inked with minimal shading on the petals.

An Oni mask is a popular subject in Japanese folklore for ages which also reflects upon Japanese tattooing tradition. It is an embodiment of both good and evil spirits as well as a symbol of protection. Here, the ferocity of the Oni mask combines with the elegance of the flowers to create this unique design. The glint in the eyes of the oni mask is inked in a bright yellow shade with blazing flames all around it. Apart from the chest, you can also place this fierce oni mask on your leg or back where there is enough space to ink the details.

The intriguing oni mask is inked along the length of the arm of the wearer. The fuming eyes convey the inner ferocity of the demon. Moreover, the large fangs that are prominently visible in its gigantic mouth add to its ferociousness. The tattoo artist has subtly highlighted the oni mask with white ink to create a stunning look for the design. A full sleeve oni mask is one of the best Japanese tattoo ideas you can consider.

This full-body tattoo of a Japanese monk is bound to catch your attention with its realistic detailing. Traditional Japanese tattoos often include full-body artwork of spiritual deities and monks like the one shown in the picture. It conveys the spiritual faith of the wearer and brings good luck. The halo inked behind the monk adds to the aura of the entire design.

Here is another full-body Japanese monk tattoo that might catch your attention. Full body artwork is one of the popular styles of tattooing in Japanese culture. Here, the monk has a white cloth draped around him and is wearing a crown on his head. It appears like he is worshipping to almighty with closed eyes. Perhaps, conveying the message of the wearer to god with his magical powers. You can opt for these detailed Irezumi tattoos with a spiritual significance for your next ink.

Samurai was a powerful military class of warriors in feudal Japan during the 12th century. They make an interesting subject for Japanese style tattoos because of their heroic tales and bravery that has ruled the pages of history. Here, a samurai warrior is wearing protective armour before venturing out on the battlefield. The warrior is inked in monochrome with intricate detailing. The shining halo behind him adds a splash of colour to the design.

Many Japanese tattoos are a representation of Japanese tradition, mythology, and folklore. Japanese tattoo artists spin a story through this form of body art that resonates with people all across the world. Take a look at this curated list of suggestions of some amazing Japanese tattoo designs that will get you inspired.