10 Best Japanese Back Tattoo Ideas You Have To See To Believe! 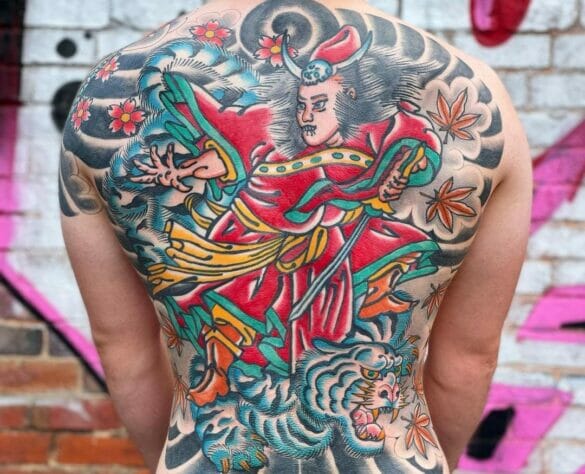 A Japanese back tattoo has always been represented as a symbol of status for the elites and has been inked upon slaves, tattooed on the Yakuza, and lastly, used as the medium of expressing one’s own self for fashionable and sophisticated men.

A Japanese full back tattoo is filled with lots of symbolism. These Japanese Tattoos express a lot of spiritual devotion, depicting certain character tendencies predominantly based on boldness, masculinity and strength. Japanese people consider such tattoos as a part of Japanese tradition, which will encourage admiration and keep an endeavour of individual growth and overall development. A tattoo artist in Japan always understands the traditional Japanese tattoo meanings since they have seen the aesthetic traditions of Japan. These Japanese tattoo designs will indeed bring a glow to your body because of the vibrancy and aesthetics within all the Japanese tattoo designs.

Thus, without any further ado, if you want to choose some Japanese Style Tattoos, feel free to choose from this list!

Get your back covered with one of the best Japanese tattoos you can even think of! With an untamed legacy of legendary warriors, you can get the warrior-like feel after having this Japanese tattoo on your body as a Japanese Back Tattoo. These intricate designs, along with a tinge of vibrancy, will attract the Japanese Art lovers out there! The madness, insane focus and dedication of the Hannya Samurai are clearly depicted in this traditional Japanese tattoo.

You might get a lot of coloured and vibrant Japanese Tattoo Designs on the list, which suits well with your body but, Monochromatic Japanese Tattoo Designs have their own charm. This tattoo design would have looked more aesthetic if there was a presence of Sakura, the Japanese word for cherry blossom. In general, these Japanese tattoos are a treat for a tattoo artist because of their deep significance.

Nishikigoi Tattoos have been causing sensations in recent times. Nishikigoi is the Japanese word for koi fish. Every tattoo artist in the world prefers to think something out-of-the-box. These Japanese tattoos have a very important significance since Koi Fish is associated with good luck and fortune. This traditional Japanese tattoo design has a very vibrant outlook which makes these Japanese style tattoos radiate an optimistic aura all around!

Moreover, In traditional Japanese tattoo designs, Koi fish plays a very pivotal role as a key element because of its unusual design. If someone aims to live a life with immense perseverance in times of misfortune and power of objectives, this Koi fish Tattoo is the best choice.

Turn yourself into an attractive human being by inking these supernatural creatures on your bodies as a Kappa Tattoo as well as an Irezumi Tattoo. A Kappa is a bizarre monster in Japanese mythology known for its amazing backstories. In the world of Japanese tattoos, Kappa tattoos are one of the most popular tattoos which are loved by any tattoo artist in Japan due to their weirdness and wackiness.

Also, in Game of Thrones, Dragons have proven their militant symbolism as well. Such a traditional Japanese style tattoo can also be considered a full-body tattoo.

Encompass your level of weirdness by inking this crazy monochromatic Japanese snake tattoo. In Japan, snakes are a symbolism of being a god, a messenger of god, or a cursed creature. During the Edo period, Snakes were considered as one of Yokai’s, which were bizarre mythological creatures. These Japanese snake tattoo designs radiate a very creepy and intimidating vibe which might make the people more cautious about your presence.

These mythical creatures have been important roleplayer in Indian Mythology and Buddhism. Ashura signifies evil as well as evil spirits, while the Buddhist Ashura God is a guardian god for the Eight Legions or the Hachi Bushu. Most of these Japanese tattoos have a very sketchy framework which makes them artistic.

This Japanese tattoo will suit perfectly for those who don’t like giving up at any cost, just like the Ashura rises above everything else, thriving and surviving in any battles. These Japanese style tattoo ideas can also be categorised as Japanese wave tattoo designs because of the framework containing wavy strokes and outlines. Moreover, this tattoo with Indian and Japanese mythical creatures can also be put as full-body tattoos because the design is pretty huge in terms of area.

Unleash the craziness within you by inking this Yakuza Japanese Tattoo. Also called Gokudo, they are a group of crime syndicates dealing with heinous activities on a transnational level in Japan. These Japanese mafia ink tattoos all over their body. Thus, artists from all over the world derived inspiration from them.

This full-body tattoo inculcates a lot of significance because the dragon in that tattoo can be associated with Yakuza: Like a Dragon. It’s a video game that was developed by Sega, and such a Yakuza tattoo design can also be used as a leg sleeve tattoo. You can also use more video game tattoo ideas for your Japanese back tattoo.

If you love to explore and experiment with various tattoo styles, this Foo Dog with a turtle tattoo will fulfil your expectations. Foo Dogs are scary and intimidating creatures that are visible in many art forms like tattoos and paintings. These tattoo designs possess a very beautiful outlook because Foo Dogs signify success and prosperity. Thus, try out this amazing tattoo design to respect the legacy of Guardian Lions.

Inking a back tattoo inspired by Japanese culture will definitely bring you a sense of immense pride and respect towards their cultural supremacy. In Japan, Tattooing the back has been a tradition since time immemorial. Choose the best back tattoo which will fulfil your desires. Some of the honourable mentions for some amazing back tattoo ideas are as follows:

10 Best Symbol Tattoo Ideas You Have To...