10 Best Samurai Tattoo Back Ideas That Will Blow Your Mind! 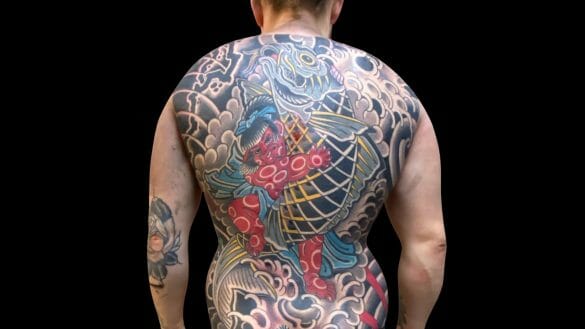 Are you looking for some unique ideas for samurai tattoos back? Here are the 10 best Samurai tattoo back-piece you will absolutely fall in love with.

Samurai were a group of military nobility from ancient Japan.

For many centuries the samurai class hailed in Japan, leaving a deep mark on the culture of the country. A samurai was known to be a true warrior.

The samurai held high ranks and social status and they functioned on a hierarchical system. Samurai men had the privilege of carrying two swords and their virtues included loyalty and tolerance. They were a highly skilled military clan and their families lived a luxurious life which made them quite expensive to be maintained. Around 1876, the samurai culture was abolished and these warriors took up other administrative and entrepreneurial roles in the society. But still, today the military tactics and political expertise of these clan is applauded.

The samurai led a life of discipline and honour. They spent the majority of their youth practising their skills and inculcating a warrior spirit. They were skilled in swordsmanship, horsemanship, archery, and martial arts, while the samurai of higher ranks were also practitioners of philosophy, military formations and religion.

Fu-dog tattoos hold the meaning of good luck and protection and are very popular designs. There are other Japanese flags and wave designs added all over the tattoo design. The entire tattoo is done in black and grey apart from the few red flowers drawn here and there. This samurai tattoo design will be a favourite samurai tattoo choice among men, though anyone can opt to ink this tattoo.

The Japanese samurai tattoo extends from the centre to the lower half of the back with one sword in each hand. A huge drake is inked in the background, the head has been drawn at the upper back and its entangled tail extends to the rearwards of the samurai. The dragon is furry towards its head and has fish scales all over its body. It has huge paws, one of which is open towards the top and the other towards the side. It has two medium-sized horns and spikes poking out from many areas of its body.

The samurai figure is kneeling down with his head held high and fire burning in his eyes. The overall tattoo design is a symbol of a samurai with a fiery personality resembling a dragon. The tattoo is very neat as well detailed and is also done in three dimensions.

This is a Yakuza samurai tattoo that involves using a variety of colours. Yakuza were notorious Japanese mafia groups and were rivals of the samurai clan. But later they adopted many samurai virtues and rituals in admiration of the samurai culture. In this tattoo, the Yakuza samurai is ferocious with orange eyes and snarling with demonic teeth.

The tattoo expands all over the back and involves the use of yellow, purple, red, black and green inks. In the background, there are usual Japanese classic style designs. If you are looking for a samurai tattoo design which represents your bad boy attitude, this is the perfect tattoo design for you.

This is a spectacular samurai tattoo design which involves designs depicting the whole life of a samurai. The samurai has a large sword in his hand and has a hannya mask on with two horns poking out from each side of its mouth. There are numerous more hannya figures drawn throughout the tattoo design along with chains, ropes, feathers, and bells, depicting a complete battle scene. Flames of fire have been added as the background design. The tattoo is done in a usual black and grey combination but also involves the use of red ink in certain areas. This traditional samurai back tattoo is a good choice for anyone who is looking for a classic and elaborated Japanese culture samurai tattoo.

A simple and soothing samurai tattoo design with no excessive patterns involved. The tattoo is of a portrait of a samurai drawn on one side of the back. The outline of the tattoo is neat and has minimal but precise shading. The samurai is adorning armour and horn attached headgear. He looks calm, experienced, and ready for war. He is smiling mysteriously while staring at his opponent which brings a curious vibe to the tattoo. If this is your first samurai tattoo or if you are willing to go for a simple samurai tattoo, this is the one for you.

This is a well-planned samurai skull tattoo and is inked very beautifully. The tattoo artist has very creatively used the skin as the base of the tattoo. There are three skulls at the centre of the tattoo with a dagger passing through the skull of the central skull and a skeleton hand holding a sword. Other skeleton structures are drawn all over the design. The highlight of the tattoo is the shading technique that the artist has used. This samurai Japanese back tattoo is a unique design and only an expert tattoo artist can ink it perfectly.

This female samurai tattoo has its own charm and symbolic meaning. The samurai warrior at the centre has unusual dark eyes. A group of snakes are adjourning her sides and also the top of her head. There is an eagle wing on one side of her face and a dark forest on the shoulder side. Below the portrait is scenery including a dark castle, mountains and a black moon. On either side, there are other figures inked in three dimensions. This is a very dramatic samurai tattoo and is an elegant design suitable for anybody.

This is a full back Japanese samurai tattoo done with dark ink. The samurai warrior is inked on the lower half of the back with fish scales and circular patterns drawn on the upper back. The beauty of this tattoo is its colour combination. The samurai tattoo is done in dark blue and black with some parts in red and yellow. This Japanese warrior tattoo is a good choice for women with a narrow back though anyone can go for an inking tattoo.

Samurai In The Making Tattoo

This tattoo is of a samurai in the making. The young samurai is preparing for war and gathering his thoughts with closed eyes. There are smoke patterned clouds done in the background along with a few star-shaped flowers. The patterns and elements on his headgear, arm guards with vets and other parts of his uniform are shown vividly. There is also a rope in a knot around his neck which has a mask attached to it.

The samurai with a cat mask tattoo is very detailed, spreading throughout the back. A thick shading of black has been done as the background in the lower half of the tattoo. A young samurai tattoo symbolises a new start in life.

This is a portrait tattoo of the samurai Takayama Ukon. He followed the Christian faith and was an accomplished man of culture. The outline of a distressed Takayama holding a sword in one hand and a Christian cross in another hand is inked in the centre of the back. Several other patterns depicting the Japanese samurai life have been added on all sides of the portrait, covering the entire back and extending to the arms. This is an outline of a samurai side tattoo design which can be modified according to the choice of the tattoo bearer. You can go for black and grey 3D style shading or can also opt for colours.

Samurai tattoos have always been a favourite choice amongst Japanese tattoo designs. The warriors of the modern era as well as the individuals who practise strength and fearlessness are admirers of samurai tattoos and ink them as a reflection of their warrior spirit. Many individuals ink samurai tattoos to remind them of their goals in life and keep them on track.

If you loved the above-listed samurai tattoo designs, here are a few more must-have tattoo ideas you should definitely check out-