10 Best Samurai Hand Tattoo Ideas That Will Blow Your Mind! 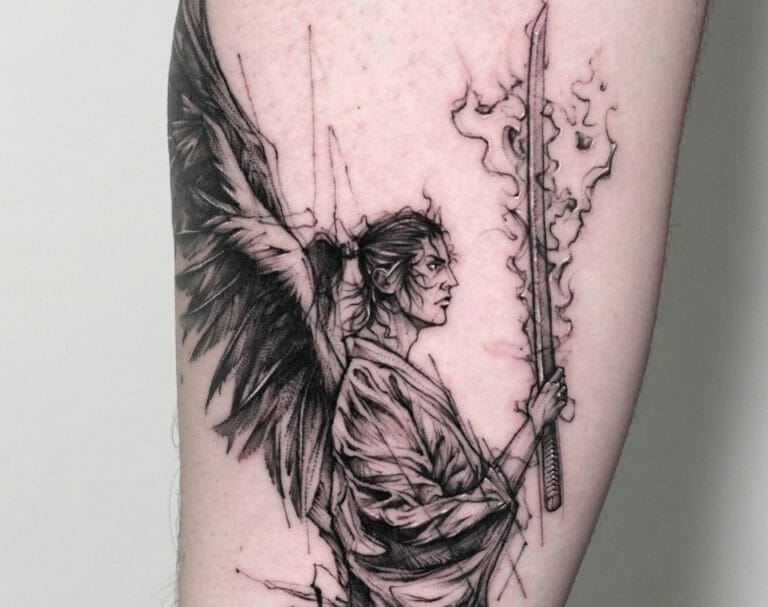 Do you really like Samurais and want to get Samurai tattoos? This is the right place to get all the information. Check out some samurai hand tattoo ideas.

Samurai is actually a member of a powerful military caste in medieval or ancient Japan. They had special privileges and high prestige and honour.

Samurai is a symbol of bravery and honour not just for the Japanese people but also for the people around the whole world. The symbolic meaning of the Samurai mask is warriors or knights. The word Samurai comes from a Japanese word which means to watch over and was used as a general term for those who were already in the employ of nobility.

Japanese Samurai mask tattoo is extremely popular in young culture. Many people prefer to get inked on their hands with a samurai tattoo because it gives them a cool look. And since this tattoo art is extremely popular with young age people, there are a lot of variations in it as well. This samurai tattoo has a human skull and carries a sword in one hand and an arrow in another. This samurai tattoo even has the hands of a skeleton. This tattoo is more like a dead samurai has come right out from its grave and coming to fight someone.

These samurai mask tattoo designs are very common. This traditional Japanese samurai tattoo represents the warriors that samurai are actually known to be. This Japanese mask tattoo also has canines outside its mouth. Such a tattoo is actually made to symbolise the bravery and nobility of a person. This tattoo perfectly fits the lower arm. These traditional samurai tattoos give the tattoo bearer a warrior vibe which makes them confident as well.

This specific samurai tattoo also has flowers of red colour on it. The whole tattoo is of black colour and just the flowers are of red colour. These flowers represent colours in their lives. But most importantly these flowers make the tattoo look good.

Half Samurai Half Human Tattoo

This samurai tattoo has a human’s face most of it covered by the samurai mask but not fully. Almost half of it is human and the rest of it is a samurai. It is more as if the human is transforming into a samurai. The samurai portion is depicted in red colour and in that portion, the sharp long canines of this samurai mask tattoo are totally coming out. The human part has its hair tied up exactly like the ancient Japanese warriors.

This tattoo depicts anger towards the samurai’s enemies and he is coming to finish them off. The eyes of this samurai are so vengeful. This tattoo is a perfect fit for the lower arm.

This Samurai Japanese hand tattoo is an amazing example of detailed body art. The helmet of the mask itself is such a detailed work of art. Then, the face of the mask, the teeth, the chin of the mask, the beard, each and everything is done in such details. And this detail gives quite a scary look to this tattoo also. This samurai mask tattoo is best suited for the upper arm since it needs a wider surface area and the upper arm offers it so. This tattoo will surely grab attention in a room or an open space full of people.

This is the most popular traditional Japanese samurai hand tattoo. This tattoo art totally symbolises what a samurai in its true sense is. A samurai is a warrior who is fully covered in armour and even a mask goes to battle with his sword. This tattoo exactly depicts that. The samurai is going to fight his battle. This tattoo is a very good choice for not just the upper arm but any part of the hand.

The red symbolises bloodshed which is bound to happen on a battlefield. And after all this bloodshed, he has achieved victory. This tattoo represents sole power. It is because of the samurai that the kingdom won the war. This tattoo represents that. It’s as if the samurai did all the bloodshed himself so his king could rule peacefully and saved all his fellow warriors from the sin of killing people by taking all the burden to himself.

This is one of the smallest and most minimalist samurai tattoo designs one can have. Since this is much smaller when compared with the other tattoos, this tattoo will easily fit a hand of any size. This tattoo does not contain any other ink other than black. The four canines of this samurai are coming out of his mouth as if he is coming to almost engulf his enemies.

This samurai tattoo has its eyes totally in black colour which signifies rage and anger toward its enemies. These eyes also give quite a scary look to the samurai as well. Those eyes give an eerie vibe to this tattoo and that is why it is a good tool to even scare off people whom one wants to avoid.

This Japanese Samurai tattoo is an example of traditional Japanese tattoos. In this tattoo, the samurai wears an old Japanese hat which was mostly worn by the Japanese travellers in ancient Japan. This tattoo depicts a total scenery of the samurai travelling from a distant place and finally, he got what he was looking for, and that is solace. The blowing hair implies that a cool breeze is blowing and the sun is setting behind the clouds. There are even birds flying in the sky in this tattoo. This is a very eye soothing tattoo as well.

This is a magnificent samurai mask tattoo containing a lot of colours. This tattoo has red blue and orange colours in it. This is an extremely detailed tattoo made by a very good tattoo artist. The colours pop up in such a bright way and that makes this tattoo look so good. The glowing eyes give this tattoo quite a scary look.

This samurai tattoo stares with its glowing eyes as if he is going to kill his enemies with just his eyes. The eyes are filled with so much anger and rage that they will burn down the enemies. This tattoo is a great start to making oneself confident and certain about his own self.

This tattoo has Japanese letters on it as well written in black ink. Now, not everyone knows how to read Japanese, and for that very specific reason, it gives a mysterious vibe to the tattoo. This is a great tattoo for the upper arm. And if you are looking for other options for samurai tattoos, here is a list of some other designs of samurai hand tattoos which you will find intriguing :