10 Best Japanese Samurai Tattoo Ideas You Have To See To Believe! 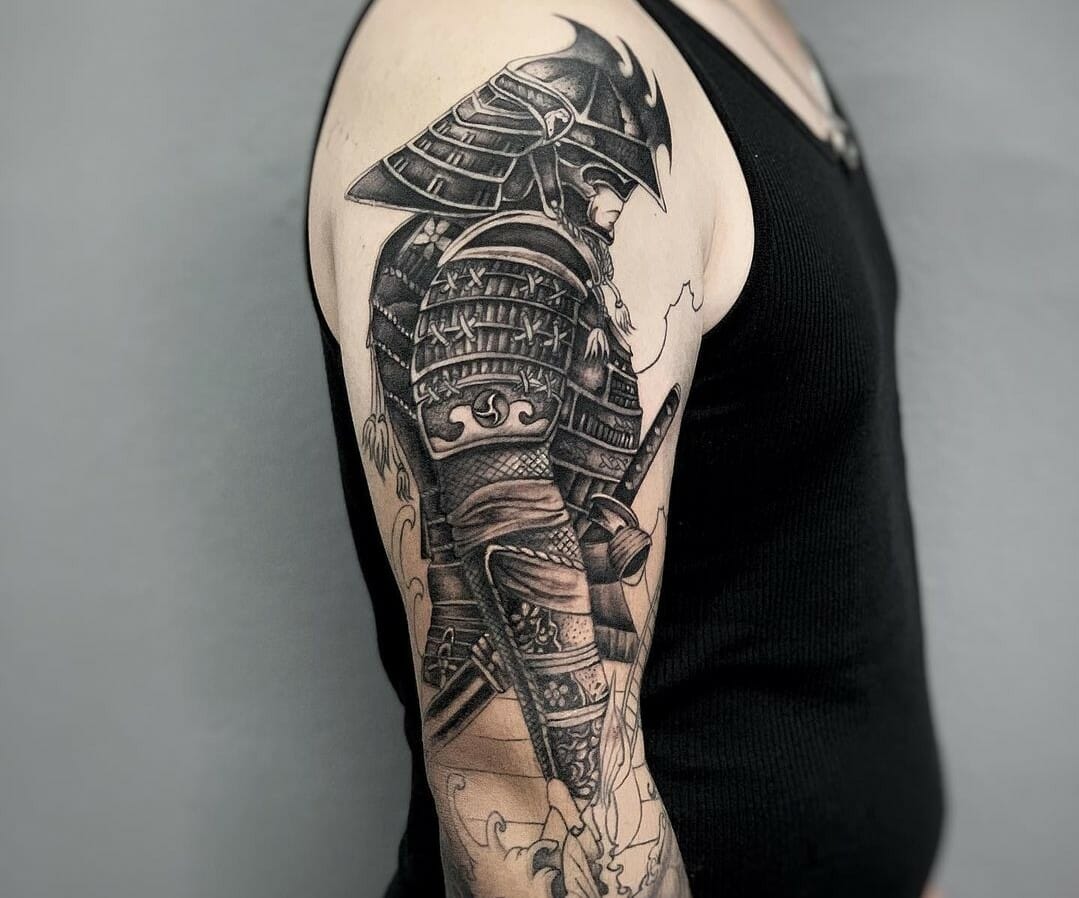 Want a tattoo related to ancient Japanese culture? Here are some amazing Japanese samurai tattoo ideas to make you really come to terms with your love for Japan.

Samurai was the military cult on the basis of heredity, in the Japanese culture.

Samurais were the warriors in Japan during the twelfth century and later in the 17th century. Although they had a range of various weapons like arrows, bows, guns and spears, their main weapon was the sword.

They had come into existence during the Heian Period Campaign. Their legends might have been timeless but their lives were bound by principles (as per the Bushido), hence samurai tattoos also represent self-discipline in honour of their lifestyle. They also styled their hair with a specific top knot and during warfare, they shaved the tops of their head to avoid any external hindrance. They can thus be the subject of excellent samurai tattoo designs. They were usually seen in a kimono and heads held high, but during their leisure time, if they were on pleasure trips, they would often hide their face to evade the possibility of being recognised in case they violated any rule in some unfortunate scenario. Samurais are a popular figure now among the young folks. They are no more in existence now as per the official records but they are still presented in honour in the Japanese culture, even today. It is now believed that many of the Samurais had renounced violence altogether after years of service to join zen Buddhism or transferred to Christianity to find peace and tranquillity.

In Japanese culture, Samurais are known to be ” bushi ” which means ” warrior “. Thereby, Samurais represent devotion to the battles of the country, standing up to death, self-discipline, courage and spirit. Therefore Samurai tattoos are a symbol of everything that a Samurai stands for – discipline and resolution. Oftentimes, the symbolic meaning of Samurai tattoos also interprets to an ode paid to the elite Japanese servicemen who lost their lives in the battleground of wars or life. In many interpretations, a samurai tattoo also personifies the tough struggles for survival in the course of one’s life. Such a tattoo is not only for expressing masculinity and vigorous Warcraft of the world, but also the process of battles, the state of living amidst a war before death. Therefore for tattoo lovers, here is a list of some of the best samurai tattoo designs one can opt for.

During the battles in Japan, the warriors were made to wear facial armour or a samurai mask for two major reasons. One was to protect the face of the Samurais from attack and another was to intimidate the weak-hearted enemies in the battleground. Hannya is a ferocious, female demoness, the face of whose is used as warrior masks due to the demonic yet compelling skull structure. They were structured with two stern and sharp horns made of metal, glassy, metallic eyes and lascivious mouths. Images of Hannya mask tattoo suggest that since these masks symbolised the soldiers in war, a Hannya mask tattoo give off the idea of vigour and fearlessness. Although the Hannya bears a savage look to it, they are often regarded to be a symbol of wisdom and a sign of fortune and used to dodge evil and anything maleficent. Therefore if one wishes to express their bravery with a cultural significance, the wild faces of the demon as a samurai helmet tattoo is perpetually one of the most preferred samurai tattoos.

The Samurai tattoo designs being quite an important symbolic tattoo comes with serious meanings. Often it is associated with sentiments and comes with other elements concerning the cultural belief. So if one wishes to add some quirk to the Japanese samurai tattoo, one can base the Samurai symbolism on the face of a Bulldog. A specific reason for choosing a Bulldog, perhaps with a Samurai helmet, is that it is one of the most recognised symbols in the Defence world. It is the same code for loyalty, courage and intrepidity with a certain whiff of an eye-catching fusion. So a Bulldog and a Samurai complement each other yet adds a quirky touch to it and is a bonus if it is thought for sleeve tattoos.

Samurai Tattoos Inspired From Video Games: The Ghost Of Tsushima

Samurais have inspired a lot of video games over the years – including games like Shadow Warrior from the older generation to the newer Sekiro. The Ghost of Tsushima, an action adventurous video game has become one of the best games to come on Playstation. The game requires the gamer to master samurai fights with a katana to save the island from the Mongolian invasion of Japan. The protagonist displays the aggressiveness and loyalty of a samurai. If you are fan of the game or just love how Samurai elements have been implemented in the game, then you might want to ink something from the game to keep it as a tribute. The meanings of this Japanese samurai mask tattoofrom the Ghost of Tsushima can bring a new meaning to the game and show your love for defining games that bring in new cultures before us.

As it has been in practice since eternity, the man of the family was relied upon to bring bread to the family and defend the life and honour of the country. Hence usually the Samurais appointed were of the male gender. But due to circumstances, in the Japanese culture, there were several women samurais appointed in absence of their husbands. The women protected not only their families but also the country with the katana and full body armour. Tattoos of women samurais signify not only the inherent meanings of a warrior but also that of the power of womanhood and a certain commitment to one’s own family. Respective owners of these tattoos are prone to not only feel a sense of style with it but also a sense of tenderness towards it.

Similar to Hannya, Oni is a demon but the male version of it, Oni mask tattoos symbolise male vigour and traditional meanings attached to it. The face has a particular design etched to it with stunning colours and is one of the most celebrated traditional Japanese samurai tattoo designs. Be it in a Hannya or an Oni traditional masks tattoo, the colour plays an important role as it is believed that the darker the colours, the more ferocity it represents in the battleground.

Angry Face Of A Samurai Tattoo

This goes without saying, if we are talking about Japanese tattoo samurai an angry samurai face is bound to come into play. Frequently portrayed in countless cartoons or animated movies of Japan, samurais can be given the touch of comic relief too as a sleeve tattoo. However, in this tattoo, we also see a gruesome image of a sword passing through the Samurai’s head – a grim reminder of seppuku – suicide if not victorious – a principle the Samurai followed.

Tattoo Representing The Temple Of Samurai

Tattoos representing huge temples can become part of your massive Japanese Samurai tattoo design collection. The large grounds in front of the temples with the rising sun behind were usually used for practice sessions of the warriors and in many cases, the burial grounds were used to bury their bodies and the final remnants. Thus, the meaning lies in the act of homage paid to the demise of the warriors and a tribute to their sacrifice.

Bushido is the code for the Samurai discipline, lifestyle and Samurai design. Generally, it refers to honour, courage and skills of martial arts and the discipline is similar to the British code for chivalry. The types have kept evolving throughout history so there is no one principle to it. These tattoo samurai designs in samurai ink are both relevant to the samurai status and the meanings of knighthood. If anyone is a young samurai enthusiast, this tattoo design as a sleeve tattoo will be a good idea as a mark of healthy and early tutelage.

A tattoo design inspired by the movie industry is always the foremost choice in popular demand. Toshiro Mifune, a legendary actor was famous for his roles of Samurais in blockbuster films like Seven Samurai, Hidden Fortress, Rashomon, Throne of Blood, Yojimbo etc. and he is known to have given life to the portrayal of samurais. So being the face of the warriors, Toshiro Mifune is a classic choice for Japanese samurai warrior tattoo designs.

In the Japanese aesthetic, a samurai in the natural habitat: with a sword in front of the sacred temple is a quintessential Japanese samurai tattoo sleeve is a symbol of hard work and dedication.

There is no end to samurai tattoos and it’s aesthetics because of it’s vast and spectacular history that includes the subject of a Geisha and the significance of cherry blossom. The tattoos range from a dragon to cherry blossoms, from samurai mask tattoos to large tattoos of the fighters on the battlefield. But apart from these essential elements of a samurai aesthetic, post navigation search, there is more to their lives and tales of their death, each of them was dictated by the society because of their honour and reputation. Owing to their great honour, history and culture enthusiasts alongside being tattoo lovers should most definitely go for these intricate designs as samurai tattoos.

Some more reference designs of samurai tattoos are –