10 Best Minimalist Dragon Tattoo Ideas That Will Blow Your Mind! 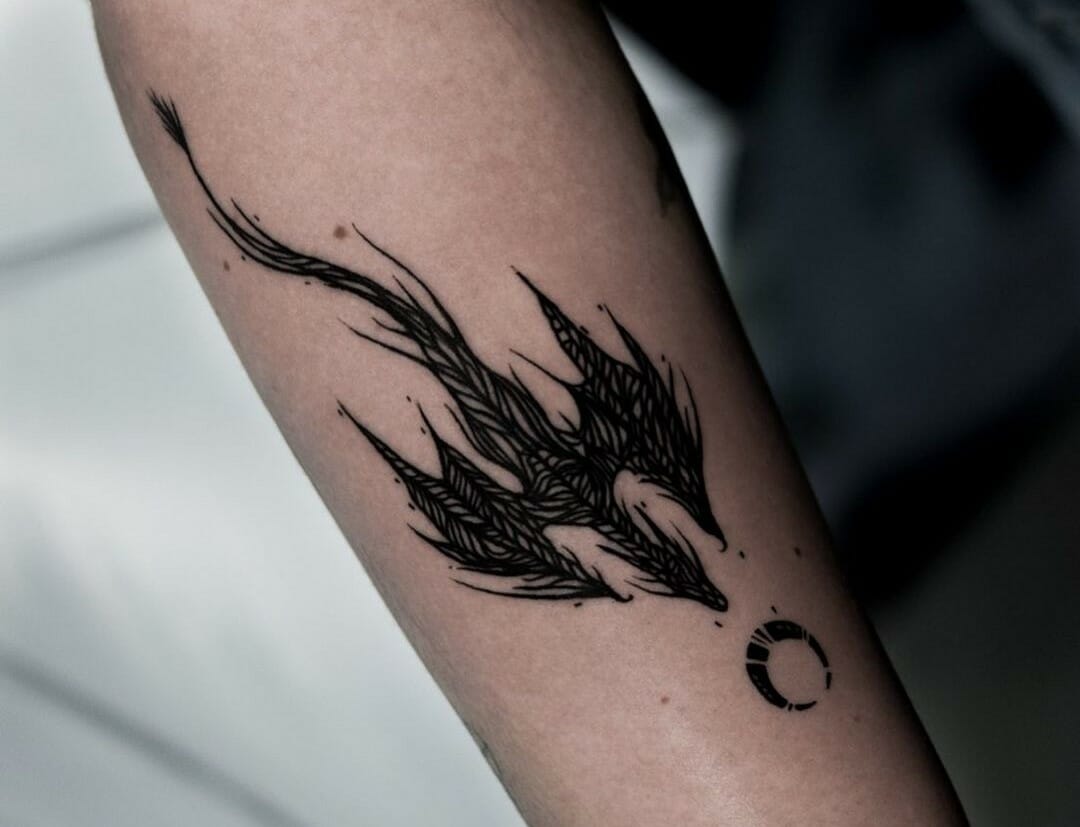 Do you wish to be inked with some of the most gorgeous and fierce minimalistic dragon tattoos? Here’s a list you should check out asap before getting inked!

Dragon tattoos have been in the spotlight of the tattoo galaxy for quite a while now.

A simple dragon tattoo in itself has an extremely striking art style. Minimalistic tattoos are quite the trendy tattoo idea that people go for often.

If asked the tattoo artist, a dragon body art is always a popular choice. And why not? These mythical creatures stand for several significances and meanings in different cultures around the globe. A dragon symbol usually stands as a symbol of intelligence, fierce beauty and vigour. But the relevance varies in various cultures. Movies like Harry Potter have popularised dragons in the Western culture largely as the unstoppable evil creature which the protagonist has to save themselves from which in Nordic culture is seen as a symbol of Power, bravery and nobility. In European culture, they are believed to be fire spewing creatures will a long neck whereas Chinese dragons and Japanese dragons are portrayed differently. They are seen as God-like figures who bring good fortune and prosperity. In the Chinese culture, dragons are seen to be tagging along demigods and the deities as companions which makes them heroes too. A Japanese dragon symbolises protection of family, good luck and happiness in the homes but in the Celtic culture, they signify wisdom and as the tail of the dragon is drawn in the culture, it shows the cycle of life.

Due to such a varied symbolic significance changing from culture to culture.. Because these beautiful creatures are creatures of Myth in every culture whereby in some of them, there deemed as sacred. So where to get the tattoo and abiding by which culture is important.

This dragon tattoo is the smarter of the lot with a ferocious dash of vigour be it for men or women. A red tattoo of a dragon is also studied with the cultures that include Ares or Mars in them. A red dragon is powerful, uninhibited and quick to grasp attacks. Tattoos like these are best suited on arm , for full body art, chest or if going for a small dragon tattoo in red, then on the wrist. These flashy red dragon tattoos should be in active display and is best to be featured on people who wish to wear their passion with a fire in their heart and symbols of strength up their sleeves. A tattoo like this can a symbol of both Evil and Good, entirely dependent on how one wishes to portray it.

As mentioned earlier, in the Japanese culture, dragons are believed to be symbolic of family security, protection and wisdom. Therefore a Japanese dragon tattoo in black ink is the perfect tattoo for good luck, to exhibit love for family and close ones, security in life and power of subtlety. This is a classic, godly tattoo which is considered to be auspicious in the households. These tattoos , is said, to have brought fortune to the person who ink it which is probable if a mythological tattoo can reinstate faith in oneself.

Dragon tattoo ideas usually are portrayed as fire spewing, aggressive creature of nature but due to the various representations in Japanese, Celtic and Chinese cultures gaining popularity in the recent times, dragons are also regarded as beautiful, attention-grabbing , fantastical creatures and ideas for tattoos. A dragon flying with graceful wings and a regal blue shade of style is absolutely gorgeous in appearance. This blue tattoo in reference emits a mysteriousness to it which has a pulling magnetism to it. It is charming, in all it’s truth indeed.

And it is no secret that plenty of series have featured dragons but definitely in a childlike characteristic. Be it in Dragon tales or Dungeons and Dragons or Digby Dragon , etc, dragons being fantastical and often a favourite mythical figure, they have frequently been used in forms of entertainment. Therefore a flamboyant animated tattoo with friendly colours signify childlike traits and playfulness yet strength in hearts and passion in the soul. These tattoo ideas make people be fascinated with them at a go and it can also take back us to nostalgic, good times. In all its grace, dragons are absolutely a wonderful idea for tattoos with childlike innocence to it. With bright wings and the happy go lucky vibe, a dragon tattoo can both be a dreamlike inspiration as well as a relatable character for the kids and maybe us too. These tattoos are best suited on the arm or chest or even thighs if one is willing to tolerate a tad bit more pain.

Mushu, the dragon inspired from Mulan is comical, free spirited , impulsive and voraciously confident. Although he had used Mulan initially for his selfish motives, this once-upon-a-time guardian ultimately gave in to his conscience and wished to save the strong warrior.

A dragon tattoo based on Mushu signifies all the attributes mentioned but also the humane conscience each of us harbour in ourselves. It is bold red in colour and usually seen tagging along Mulan with it’s overexcited grin in face , this dragon themed tattoo is a refresher from the other dragon tattoo ideas that we usually come across. For a change, one can ink this tattoo – Mushu peeking , on the neck or on the arm which might make it seem like the dragon, like a guardian dragon is moving along with us.

Dragon Ball Z, the famous Japanese franchise inspired from Manga is basically about the journey of a character who trains in martial arts and his quest with a teen to find dragon balls which summon a wish granting dragon to anyone who acquires it. That goes without saying, the series is an adventure laden and thrilling work of entertainment for children. The tattoos inspired from this will henceforth be a Japanese dragon tattoo which is relevant for those who are major fans of this series and manga. These tattoo ideas can takes us down to a nostalgia trip and feed the hunger for adventure and thrill within the souls. As a form of body art, this elaborate tattoo is either best on the chest or the full length backside.

Anime lovers, this one is for you!! It is almost impossible for any anime lover to not be a fan of Haku from Spirited Away. Haku is both a human shield as well as a fighter dragon ; one of his most important mottos is to safeguard Chihiro – the female protagonist , with all his life. This simple dragon tattoo of Haku signifies the abilities he possessed – wisdom, telekinesis, cloaking, memory implantation, speedy flight and immaculate cooking skills. Haku is the face of sacrifice, duty , agility and mental sharpness which makes it a perfect choice for dragon tattoos ; and perhaps also for a soulmate.

Dragons are feral, powerful, fantastical God-like creatures but every living being is a sweet, naive baby once right?

This cute baby dragon tattoo can instantly win hearts and of course, people’s attention with the adorable demeanor. A baby dragon tattoo shows the initial steps into the menacing world, birth of power and innocence before the real world hits us.

Best if one ink it with pale, baby colours with an unicorn like colour play to it.

A Sideboob Tattoo in itself is bold and exhibits a wild characteristic and to club it with a dragon tattoo, it undoubtedly portrays the wildness of fire and the tempestuousness of the entity. For a better effect, get one of the fire breathing ink ideas on the sideboob which literally can paint the fire in one’s soul and characteristics in everyday life.

Exactly how we envisage a dragon tattoo, this traditional tattoo of the magnanimous creature is awesome and brings forth fear and is more feral than a tiger. It signifies the traditional values, faith in strength, boldness and can stand as a magnificence in existence. Hence when in doubt, get yourself a traditional piece of art.

As evident, a dragon tattoo has a number of variations to it. Dragon tattoo designs are symbolic to every gender role, to every side being of both Godly and Ungodly. It has both the elements of Fire and Water and is both auspicious and not. So there is a certain contradiction to it which makes it all the more interesting. For a dragon tattoo, it can take up a little more time than usual, simple tattoos. A small tattoo of a dragon on the arm or wrist or anklets take up a few hours but large ones on sleeves as sleeve dragon tattoo , back or chest can take full day sessions so it is a matter of patience to get a dragon tattoo. Usually if abiding by the Chinese culture, it is not uncommon to have full bodied tattoos. Another important character of dragon tattoos is that it can be made in different styles : in bright colors, or dark ink, in a larger-than-life fashion or in tribal fashion , in a way that signifies power or in a style that makes them symbols of home safety and luck. The important parts of having a dragon tattoo for body art is it should have a detailed outline and appropriate shades to it to go with the style in demand. Thereby a dragon tattoo is a piece of art that results to a wide variety of styles. For more dragon tattoo designs , one can also get inspiration from these dragon tattoo ideas as follows –

– Dragon Tattoo But With Naruto