10 Best Samurai Girl Tattoo Ideas That Will Blow Your Mind! 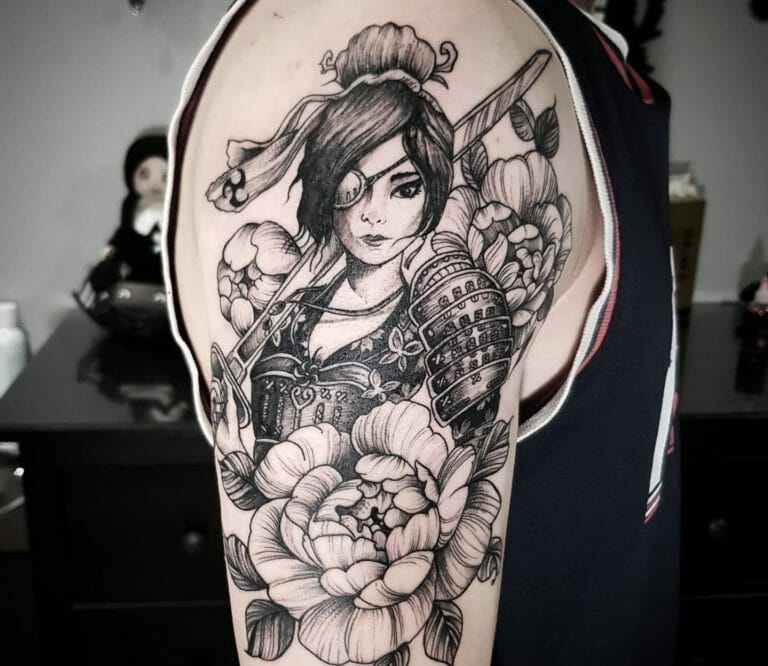 If you’re a fan of Japanese culture and looking to get samurai girl tattoo ideas, this list would be perfect. Check out our long list of samurai tattoos.

The term samurai was given to a Bushi warrior, an aristocratic Japanese warrior, which was mostly men dominated until women became involved.

After that came the Onna-musha, where they employed any female warrior. Thus a girl samurai became symbolic of the pain you overcome and emerge into a fierce beauty, and thus samurai tattoos symbolise the same.

The idea behind getting a girl warrior tattoo is to highlight Japan’s rich history, and other elements of honour, discipline and inspiration. Samurai tattoos are often combined with the koi fish which is a symbol of strength, dedication and bravery in Japan’s culture or sometimes there are skull samurai tattoo designs which indicate the pain and death associated with any battle. But the most popular samurai tattoo designs include a samurai warrior with their sword, the katana.

Although this cannot be recommended to a first-timer, this blackwork samurai tattoo design shows brilliance. With intricate gradient shading on the armour, the designs on the same, the tiger on the helmet and the detailed face, with the skin left blank in places to accentuate the realism of the picture, this tattoo is as real as it gets. The hazel tint of the eyes as well as the splash of red at the bottom, add a charming contrast to the monochrome of black and grey.

Tokidoki is a very famous lifestyle brand in Japan and combining samurai tattoos with that makes for cute Japanese tattoos. In this detailed tattoo, there is a burst of colours, with a woman in the middle, the skull Tokidoki design on the bottom and top, her grey armour with skull flags, a yellow and red caricatured headpiece, the ribbon at the end of her face in red, blue and yellow, much like her eye-shadow, with red dragons and purple flowers on each side, with the end of the dragons continuing to the bottom. On her top, the katana swords are crisscrossed, making this samurai girl face tattoo. a treat to look at.

Among several samurai girl tattoo designs, this simple blackwork tattoo will be perfect for first-timers, especially women. This samurai tattoo depicts a woman, holding her sword, decked in traditional clothing, with wings on her back. This sketch-style tattoo contains black gradient shading on the clothing, hair, katana, wings and well as background, combined with fine-line strokes on all of these, to make the sketch-style look more realistic, making this tattoo have a great look.

In this unique samurai warrior tattoo design, the traditional girl samurai is drawn with a modern twist. With a stamp-style outline, this design portrays the warrior in modern-day clothes, like a leather jacket, holding her katana behind her back. The traditional crown, the long-drawn eyes and a band-aid on the face depict the fusion of the historical life and the modern life. The entire design is done in light-coloured fine lines, with shading making it the coolest tattoo for girls.

Japanese girl samurai tattoo designs come in a lot of variety, and although big tattoos should not be recommended as a first tattoo, this design can be done in a smaller size. This blackwork tattoo shows a girl fighter, her hair done in an intricately designed bun with flowers, a small but detailed face and a tattooed forearm holding her sword that showcases a picture of dragons and clouds, done in exquisite detail, with even the claw being visible. Everything is done in fine line art, especially the hair and such a simple yet powerful design will look good anywhere on your body, like your chest or your legs.

If you’re looking for realistic samurai tattoos or warrior tattoos, search no more. This stunning Japanese warrior tattoo depicts a woman, with a monster mask hanging from her neck, her helmet on top of her head, tying her hair back, with some loose strands floating about, and the hilt of her weapon visible. The red patterns behind her and the bright pink cherry blossom petals give this blackwork a beautiful contrast. There is gradient shading on her face, head, sword, hair and mask, with pink highlights on her nose, mask and the emblem on her crown, with bright pink eyes and eye make-up and even a mark between her brows. Such large tattoos may be time taking, but the brilliance is worth it.

Even though sleeve samurai tattoo designs are not recommended to anyone getting their first tattoo, this design is enthralling. Using a darker ink for the female samurai in the middle and a lighter ink for the background details, this tattoo presents realistic work on the face, eyes and hair of the warrior, with immense detail in the backdrop including a dragon with perfectly drawn scales, winding up her chipped off sword, her hand holding a black beast mask, the scattered leaves and flowers and smoke and a cloudy beast at the bottom, baring its claws. Such explicit samurai tattoos may be time taking, and you can go with a simpler design or add your own ideas.

Japanese tattoos with dragons and female samurais are some of the most common samurai tattoo designs. Symbolising freedom and good luck, this duo becomes protectors of life from death. In this samurai tattoo, a girl is seen with her fighting gear, a beastly dragon headset and a monster mask. To accentuate the realism of the tattoo, there is gradient shading on the face, fingers, mask and helmet of the warrior, especially on the dragon atop her head. The touch of red adds a beautiful contrast to the stark black. Such samurai tattoos with deep meanings would be a great choice as a first tattoo.

If you want to search for a unique samurai tattoo design, then this is it. This design is drawn in the traditional art style of Japan, with intricate details and gradient blackwork shading. With ropes dangling from the helmet worn by her, it consists of a skull with claws, horns poking at the back that ultimately grows into spiky tree trunks. The armour is done in stellar detail with oriental designs, and with leaves around each shoulder. At the bottom blooms a peony, which is associated with the meaning of love and honour, and everything is done in stunning detail, from the face to the flower to the armour, which makes this one of the best samurai tattoos for both guys and girls.

This warrior tattoo presents the moment a geisha is about to fight. Geishas were female entertainers and were trained with a lot of qualities. These realistic tattoo designs work great anywhere on the skin, and in this design, we see the blackwork image of a geisha against a bright red circle holding her katana. There are no borders in this tattoo, and there is gradient shading on the folds of her clothes and hair to highlight the details which make it look like a real photo. The red and black contrast is a classic charm that makes this tattoo an even better choice.

The symbolism of samurai tattoos is full of deep meanings- to protect one from death and also associated with images of the sense of noble, higher thinking, discipline and showcases the rich heritage and culture of Japan. Thus samurai tattoos form a set of tattoo designs that stand meaningful to the world, with answers that bring the rich past of Japan to the fore and a symbol that strives to overcome death.

If you’re an anime fan, then samurai tattoos would be a great choice for you to display that you’re a fanatic, since anime also has a lot of female samurai representation. Samurai tattoos can thus be perfect for both guys and girls and they can also be tattoos with meaning, so get yourself tatted with samurai ink. If you’re looking for more samurai tattoo ideas or hunting tattoos, then these ideas would be best: