58 Game of Thrones Tattoo Designs You Need To See! 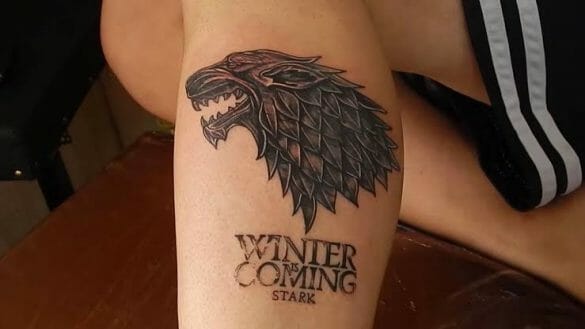 Even though the series has ended, it has undoubtedly left an impact on so many people. After eight seasons, many people have fallen in love with the characters and the story of Game of Thrones. Therefore, it is no surprise that many of them decided to pay tribute to this show by doing a tattoo. In today’s article, we are bringing you some of the best Game of Thrones Tattoo Designs you have yet to see!

Even small fans of Game of Thrones know that dragons are a big part of the show. Dragons can be used as a fantastic Game of Thrones tattoo designs because of their style. You can do them as sleeve tattoos, and since they are so cool, we are sure you will want to share them with everyone!

Emilia Clarke is the actress who portrays the role of Daenerys in Game of Thrones. Fans loved her character, and she is also known as the girl who trains dragons. Doing her as your Games of Thrones tattoo can be a fantastic choice if you want to cover-up an old tattoo.

In case you want to do a more subtle Game of Thrones tattoo that isn’t going to tell everyone around you, you’re a huge fan; then this one might be for you. Valar Morghulis is the name of the final episode in season two, and it translates to “All Men Must Die.” It has a lot to do behind the ideas of the King. This is a fantastic tattoo for all Game of Thrones lovers out there!

Fire and Blood is the name of one of the books of Game of Thrones. Therefore, Game of Thrones tattoos can be inspired by the books as well. This tattoo is done in black ink, and it represents the book cover. The design is fantastic for both Game of Thrones lovers and just tattoo lovers in general!

Unlike the other dragons, this one is small, and it works great for people who don’t have a high pain tolerance. Game of Thrones tattoos like this one is very simple and subtle, making them perfect for tattoo beginners. We are sure you will want to post this tattoo on all your social media!

The most popular post from Game of Thrones that is known by everyone is “Winter is Coming.” You could even say that throughout the whole series, this is the main focus of it. This colorful tattoo is a piece of art. Not only will you love it, but everyone around you is going to be mesmerized by it!

You are probably going to see Game of Thrones tattoos mostly on the lovers of the series. But the tattoos are so versatile that you can wear them even if you are not a fan of the show. We hope you liked today’s article and who knows, maybe new tattoos are coming.