10 Best Oni Mask Tattoo Ideas You Have To See To Believe! 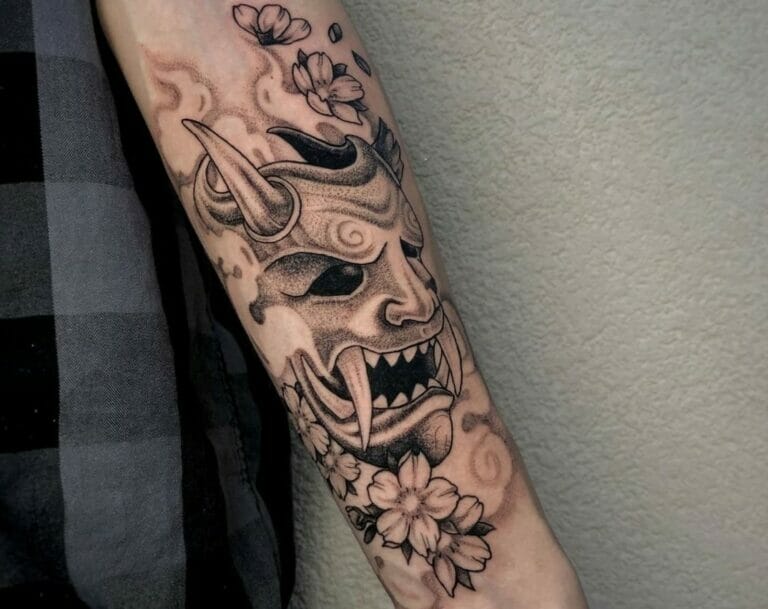 Are you interested in getting a really unique and meaningful tattoo? Then you’re in luck because we have a list of the 10 best Oni mask tattoos ideas all for you!

An Oni is known to be a troll, ogre, or demon that haunts and tortures people both on Earth and in hell.

For many, the Oni is a symbol of evil. The Japanese mask traditionally shows the demon to be bright red, blue, pink, or grey.

When it comes to the Oni mask tattoo meaning, there are various interpretations of the same. The word’s origins are often thought to mean ‘invisible spirit’. Others consider it, at face value, to be a demon. Many also get an Oni mask tattoo as a symbol of good luck.

The Oni tattoo is a representation of a male demon that torments and makes life miserable for others, often in hell. The Hannya mask tattoo represents a female demon whose uninterrupted rage leads to extreme vengeance. The Japanese Hannya mask is believed to be the female version of the Oni mask. Those who are familiar with Japanese Buddhism are most probably aware of Hannya mask tattoos and the meaning of the word Hannya, which refers to a higher level of consciousness or holistic wisdom.

The Oni mask tattoo design is one of the most popular designs from Japanese folklore. They often are known to ward away evil spirits or bad omens since the Oni are frightening and powerful. The Oni in this tattoo has been depicted with three sets of eyes, which could refer to their third eye or refer to them being all-seeing. Many oni mask tattoos show these ‘beasts’ with extra fingers, toes, or eyes. This only adds to their scary appeal. The impeccable shading and use of dark to work make this design look extremely clean and impressive.

Aa medusa and Oni infused mask tattoo is a great mixture since the two separate beings both represent scary deviants from mythological history. Medusa’s signature reptiles, the hissing snakes, paired with the Oni mask, make for a powerful tattoo. If you’re looking for a Japanese folklore tattoo that looks similar to this one, Japanese hannya mask tattoos are also a great option! The Hannya mask tattoo design represents a female demon consumed by jealousy, rage, and possessiveness. People who are familiar with the Japanese Noh Theater probably recognize this character as it appears pretty frequently. People who get a Hannya tattoo design often also love kyōgen theatre shows, which are generally comic performances.

Oni Mask tattoos are commonly inked in colours such as red and blue. The different colours represent different temperaments or traits of the Oni. Often, the emotions that the Oni mask represents can be negative emotions because they are perceived as pure evil. Blue often refers to anger or irritation, while red can represent greediness.

If you wish to get a detailed Japanese mask tattoo, you should make sure that you go to an experienced tattoo artist that has already inked many people and has created a lot of good Japanese tattoos. This is due to the fact that this demon tattoo has a lot of specific characteristics, such as sharp fangs, horns, and facial colour, which cannot be incorrect. This is a really good traditional oni mask tattoo that not only captures all the important elements but also conveys the ferociousness that the Oni is commonly associated with.

Not everyone wants a large tattoo that is visible to everyone. This is completely understandable as many modern workplaces or institutions don’t appreciate or allow tattoos. However, this shouldn’t really stop you or discourage you from getting a tattoo that you love! A small Oni mask tattoo like this one is perfect for those who want minimalistic small tattoos that represent their interests or desires. Small tattoos are often treated as charms that bring good luck and protection to the bearer. The Oni tattoo in between the two swords might symbolize a fighter that is trying to ward off the bad luck and evil away from the man or woman who has this tattoo and providing them with protection.

Linework tattoos with linework have been getting more popular over the years as new types of tattoo styles have come into play. Oni tattoos with the linework are sometimes a better option for those who don’t want an intense Japanese mask tattoo. The menacing look on his face also transmits the message that he’s a demon with evil intentions.

Linework tattoos are really popular throughout the world, not just in Japan. This tattoo is great for people who want an Oni tattoo but who don’t want an extremely bold or eye-catchy tattoo. The gaze behind the Oni’s eyes is enough to convey the intensity of the tattoo and leads to the tattoo looking menacing even without a wide variety of colours.

The chest is a really common body part for many tattoos, as it places a central focus on the tattoo. It is also a location where it is easy to hide tattoos since chest tattoos can easily be covered up by a shirt or a t-shirt. The dark shading and bold lines highlight the darkness that is attached to the Oni and is a great way to showcase the evil that the Oni represent. The usage of monochromatic colours such as black, white, and grey makes the tattoo look bold yet classy. Aside from Oni masks, if you or someone you know is interested in masks, art, or Hannya mask tattoos, then this tattoo could serve as a point of inspiration for your next tattoo! Just like this tattoo, you can add certain customizations, such as your year or date of birth, to personalize your tattoo.

An Oni mask tattoo doesn’t just have to be traditional in the sense that it needs to be a full Oni mask tattoo. There are various different Oni mask designs that one can get inked, which are offbeat or non-traditional. This type of design is a great example of a unique Japanese mask tattoo design that can also be used for Japanese Hannya tattoos, Oni masks, a hamsa tattoo, or even a normal demon tattoo. The split between the mask and the open gap reveals what’s inside or behind the mask’s facade, or it can also be interpreted as showing the hollow intention behind the demon’s actions and words. There are strings of cloth that link both the sides together, revealing that there is essentially nothing else that is present behind the face. The redness behind the eyes is also reminiscent of the red that is associated with the Oni and used in most traditional Japanese Oni mask tattoo designs. Other meanings could also indicate that the Oni is feeling anger, hate, contempt, or passion. If you need a tattoo for good luck that is covert, fashionable and has a deep meaning, then this tattoo is a great option.

Flowers often represent positive themes such as love, friendship, life, gratitude, and faith. There is some good and righteous Oni present like Naita Aka Oni. But, they are rare. Therefore, there are a few Oni mask tattoo designs that incorporate light-hearted and positive symbols in order to showcase Oni’s goodness. The cherry blossoms emanating from inside of the Oni showcase the Oni reaching a better life after death. In Buddhism, a demon can turn good if they’re converted. The leaves, colourful horns, and ombre pigmentation of the Oni’s face make the Japanese mask look bright and cheerful. The strings that surround the mask are used to tie the mask to the actor’s face. Not all tattoos have strings attached, especially demon tattoos.

Hannya mask tattoos are very common due to the infamous story of Prince Genji and his mistress. Prince Genji, a Japanese prince, had an affair outside of his marriage and obtained a mistress. However, when his wife got pregnant, he stopped spending time with his mistress. The mistress soon became overwhelmed with jealousy and rage and lost control. She ended up transforming into a female demon and possessing the body of the wife in order to scare her. The wife then ended up dying.

The Hannya mask represents a women’s descent into madness. In the tattoo world, artists often recommend getting a Hannya tattoo if you have gone through tempestuous romantic relationships, a failed relationship, heartbreak, or experienced how bittersweet unrequited love can be. Another reason to get a Hannya tattoo is to symbolize that you are someone who has gone through a difficult time and overcome it successfully. The traditional Hannya tattoo and Oni Mask tattoo are both good tattoo designs for people who wish to get a talisman inked which is a symbol of good luck.

If you or someone you know has been dying to get a nice back tattoo, then this Japanese mask tattoo would be perfect! Tattoos such as this one can be considered to be statement pieces or even art pieces. Although it might just appear to be a regular demon tattoo on the top, the Japanese mask carries heavy symbolism. Many people believe that the devious Oni can devour people, and therefore this Oni mask and many other Oni masks show Onis with open mouths. The detailed forehead and horns also add a dimension to the Oni mask tattoo and make it come to life. Some of the same features can be added to Hannya tattoos to help them come alive. Oni mask tattoos like this one are a good bet because they are almost never going to go out of style due to their relation to Japanese mythology.

If you have been looking for a cool Japanese Oni mask tattoo with a deeper meaning, a samurai Oni mask tattoo, a female demon tattoo, Oni masks, or a Japanese Hannya mask tattoo, then these tattoos should fulfil your needs or at least help you get started!