10 Best Japanese Water Tattoo Ideas You Have To See To Believe! 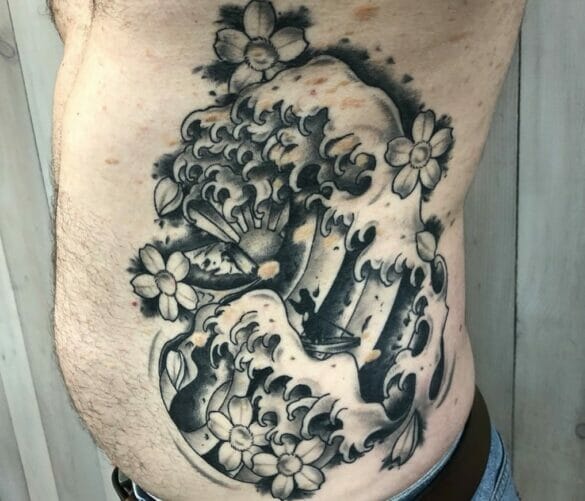 An important element of Irezumi or the Japanese art of tattooing is water. Here are some interesting Japanese water tattoo designs you wouldn’t want to miss!

Japanese water tattoos are symbolic of wisdom, power, and intuition.

Water is one of the most essential compounds of nature and a force that sustains life on earth. The depiction of this life-sustaining fluid in the Japanese tattoo design bears a multitude of symbolism.

The Japanese tattoo designs often portray the water as the central theme of the artwork as it is the source of all creation. Water can also pave the way for the destruction of life and human existence with its immense power. This duality in its nature is beautifully represented in these designs. The presence of celestial bodies in water tattoos bears a special significance as the formation of tides are often influenced by their presence. The natural course of the flowing water is often considered to be an embodiment of femininity.

You can incorporate other elements into your Japanese water tattoo design such as hot springs, sailing boats, or the moon to make your Irezumi look even more fascinating. Take a look at the list given below to get ideas for your next ink.

The legendary water dragon, also known as the Mizuchi, is perceived as a water deity in Japanese culture. This traditional Japanese tattoo is an amalgamation of various patterns and inking styles in one frame. The water dragon can be seen inside an ocean with its jaws wide open. The waves of the ocean are splashing on the sides. The water dragon is believed to curb evil spirits and bring good luck to the wearer. If you are looking for an elaborate Japanese sleeve tattoo of a water dragon, then you should definitely consider this one.

If you’re getting inked for the first time then this design can be your ideal pick. This detailed depiction of the oceanic wave in a small frame is quite remarkable. The waves also hold a deep symbolic meaning when it comes to tattoos. Perhaps, it is one of the most fierce natural forces that can come as a blessing or a curse. This duality in its nature brings an air of mystery to it.

An intricately detailed oceanic wave in a Japanese inking style can be an interesting idea for your next ink. Here, the ocean surface has swelled up into a giant tidal wave that is about to plunge down. The subtle gradient of blue with hints of white is used in depicting the tidal wave. You can alter the size of your design according to your wish and add further detailing to make it look even more fascinating.

The beautiful sunset on the edge of the ocean is depicted in this tattoo design inside a circular frame. The waves have curled up in the ocean while the sun adds a striking contrast to the design with its illuminating glow. The tattoo artist has inked the water body with a shade of blue and fluid strokes. Moreover, the beautiful shading and the iconic circular framework of this Japanese tattoo design has definitely brought it to life. You can fit this concise design anywhere on your body according to your preference.

A ship sails amidst a huge tidal wave on the ocean. The crest has curled over the front of the wave and is about to plunge down towards the ship. The scene depicts chaotic turbulence as the ship struggles to stay afloat. The intricate patterns on the base of the ship are inked in a variety of shades. The wave is inked in different shades of blue but none of the colours fades into the other. The beauty of this design is enhanced by the incorporation of the conspicuous red rose at the bottom. You can place this gorgeous Japanese sleeve tattoo along the length of your arm like the one shown in the picture.

If you are in search of a gorgeous monochromatic Japanese tattoo design featuring water, then this one can be your ideal pick. Here, a bunch of gorgeous cherry blossoms are inked inside a water body. The entire design has been completed by using black ink. The shading and highlights throughout the design are done with perfection. These beautiful flowers are known to have a short lifespan. Thus, Cherry blossom, together with the flowing stream of water, signifies life’s fleeting nature. Hence, this Japanese tattoo can be a great reminder to live every moment of your life.

This monochromatic design illustrates a beautiful scene across a valley with a flowing stream of water. A crescent moon along with twinkling stars shine brightly on the night sky. The wind has rippled the surface of the water in the stream. Moreover, the pink cherry blossoms, growing in the valley, add a pop of colour to the design.

A river flows down on the arms of the wearer with a bunch of floating water lilies and a sinking lantern. The impressive gradient of colours to ink the flowing water adds a realistic touch to the design. The flow of water forms a swirling disc at the centre of the design. Ink this design on your arms or back where there is ample room to fill in the details.

This beautiful portrayal of the seabed, at the bottom of the ocean, is not one to be missed. It must have been extremely time-consuming to complete the entire artwork in a watercolour inking style. The magnificent beauty of this water Japanese tattoo is accentuated by the presence of the flower on the side. Streams of water are trickling down the edge of the caves. Moreover, the light of the moon illuminates the surface of the water.

If you are in search of traditional Japanese tattoos with a unique twist then you might consider this design. This appearance of the wave wing tattoo on the chest of the wearer is accentuated by the anchor at the centre. The intricate detailing of the waves in the form of a wing is done with a variety of shades and a fluid gradient of colours. Moreover, the anchor tattoo in the middle of the frame adds a contrast to the design. An anchor attached to the ship prevents it from moving away and thus it can be attributed to stability and determination. The significance of the anchor is amplified by the presence of the ocean waves.

Here, a stream of water flows from the pages of the book. Perhaps, it denotes the vast ocean of knowledge that remains hidden inside a book. The sparkling stream is drawn in a shade of white and blue while the book is inked in monochrome to add contrast. Ink this Japanese water symbol tattoo design if you are a person who recognizes the importance of knowledge.

This gorgeous koi fish inside a water body is inked with absolute perfection. The water in the river is inked in a contrasting shade of black that adds a stunning depth to this tattoo art. The fish is drawn in a royal blue tint with intricate detailing on its scales. The red flowers on the bank of the river further enhance the remarkable appearance of this design. Koi fish is one of the most popular elements of Japanese tattoo art that carries a deep symbolism. Perhaps, it is a symbol of perseverance to overcome the challenges in life.

This is another great alternative to a water tattoo design with a koi fish in a Japanese inking style. Koi fishes come in a variety of colours and patterns. Here, the scales of the fish are inked in a shade of orange with black blotches. The river is beautifully portrayed with a splash of waves swirling around the fish.

This tranquil portrayal of the waterbody, inspired by traditional canvas painting, is bound to catch your attention. The transition of colours in the sky during the sunset is reflecting upon the water body. The water lily at the bottom adds depth to the entire design and amplifies the beauty of the aquatic habitat.

Apart from their beautiful appearance, these Japanese tattoo designs of water have been popular all across the world for the meanings and symbols attached to them. Your Japanese water tattoo meaning might also vary according to your choice of placement and design. Here is a list of suggestions of Japanese water tattoos that might inspire you for your next ink.