10 Best Wolf Face Tattoo Ideas That Will Blow Your Mind! 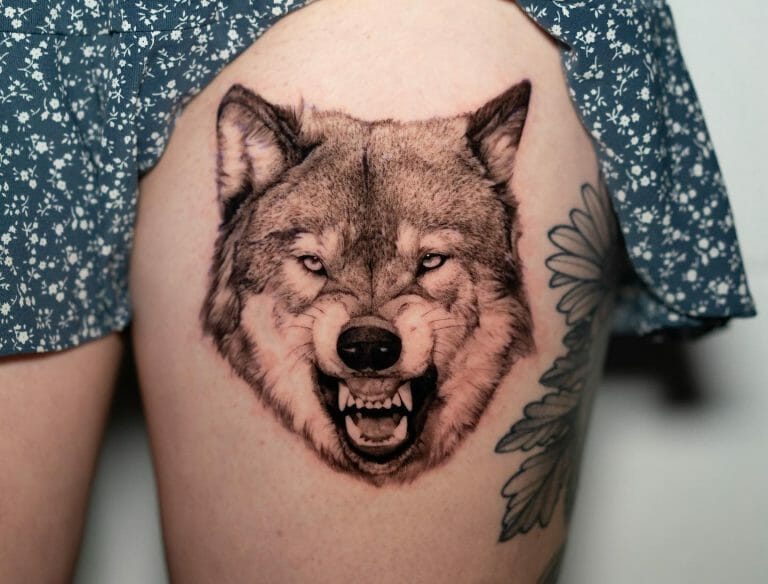 Wolves are an amazing theme for aggressive and cool tattoos. Here are amazing close-ups of wolf face tattoos ideas to get your aggressive side to the open.

Wolves – these aggressive and handsome creatures have remained a thing of legends and myths for ages.

From werewolves to Gods, wolves have been interpreted in several ways and wolf tattoos carry many meanings, coming from both legends as well as personal interpretations of the tattoo owner. These handsome creatures make for amazing tattoos where all the details of wolfish behaviour like a snarling wolf or a wolf howling at the moon can be brought into limelight.

Since the wolf symbolises strength, represent stealth and rebellious nature, they have also turned into famous figures for native Americans. Hence, wolf tattoos with dream catchers, a full moon, blue wolf eyes or even wolf sleeve tattoo can have a deep meaning. Even in Japan as per Shinto gods and myths, wolves or okami are considered as messengers of kami spirits. A wolf represents dominance as well. Due to the variety of interpretations that a wolf can bring, there are different stories of wolves, from the Big Bad Wolf of Little Red Riding Hood to the Twilight ‘Werewolves’. A werewolf tattoo is still famous tattoo and many people also opt for a wolf sleeve tattoo or a wolf forearm tattoo, adding a touch of mysticism to it, especially by decorating the wolf head with either dreamcatchers or jewellery.

Some of the most famous wolf tattoo designs are howling wolf tattoo, geometric wolf tattoo, watercolor wolf tattoo or small wolf tattoo. Among all these different tattoo ideas, most of the time, the body of the wolf is shown and face is not always in focus. Hence, while a wolf howling tattoo might look good and popular, a wolf face tattoo gives a more up-close and personal approach.

Since wolves were once considered messengers of spirits, you can always go for tattoos that can bring the mythical element of wolves. A traditional wolf tattoo with bold colours but with a touch of divine, coming in with all blaze and fury can make a tattoo look ultra-cool and ferocious. Using a mix of black ink and blue eyes can make for a very eye catching tattoo of a wolf head, that symbolizes strength but more importantly, has an air of spirituality to it.

You can even make this cooler by adding a real yellow fiery blaze to the wolf face or adding blue eyes and make it look both more handsome and menacing.

A realistic wolf tattoo does not have to be ferocious. If we look from an evolutionary standpoint, wolves are the ‘terrible beasts’ which were domesticated and became loving ‘dogs’. There is a softer side of wolves – a side very few people seem to explore. A calm wolf head tattoo with flowers on one side can really bring up the other side of the otherwise menacing, snarling wolf – a cuter and friendlier side. Perhaps, it can be a tribute to the ancestors of our furry pets. Such wolf tattoos for men and women can be a really cute addition to your tattoo collection.

In the current times, a way the Gen-Z culture works is changing how we look at things. So, a wolf no longer needs to be menacing. The traditional evil wolf face tattoo comes with a twist – with the addition of some magnificent flowers like magnolia or even roses, the evil wolf face tattoo turns into something really cute. If you want, you can add your favourite flowers into the mix and even add a small howling wolf tattoo to give it a concrete wolfish look.

Wolves are known to be messengers of kami spirits but if you really want to bring a new dimension to your wolf tattoo sleeve tattoo, you can add a third eye to the tattoo idea. The third eye shows that your wolf tattoo does not have to be a symbol of the West – like it has been for the most part. There can be an Eastern spiritual effect that the wolf tattoo can portray bringing a universality in the mix. This can be done of the best wolf tattoo designs for a spiritual person who doesn’t want to shy away from their spiritual side.

If you are looking for an adorable forearm wolf tattoo, then this can be a great one to go for. It features a wolf headset the wolf head is hiding behind sunflower bushes and grass. The tattoo can be extremely detailed bringing the details of the wolf head into the mix and also, not making the sunflower fade away. This is a popular style of animal tattoo, where a ferocious animal is often placed in a serene environment to make the animal look friendlier and different. It’s a great way to showcase the beauty of nature, even if it is in the wilderness.

You can even add a punch of watercolour in this tattoo mix to make it a watercolour wolf tattoo idea.

The ferocity of the wolf does not change the handsome allure a wolf tattoo can bring. If you are someone carrying a deep-seated passion in your heart for the things you love, this is the tattoo for you. Wolves, unlike many other beasts, have a structured social dynamics – with an alpha wolf being part of the wolf group, directing them onwards. If you feel this alpha wolf energy within you, this is an aggressive tattoo that you can go for.

If you are really looking to amp it up, you can go for a little colour within the black and white stencil wolf. Blue eyes can really make the tattoo pop out and make a difference.

While a snarling wolf or howling wolf tattoos might look amazing, you can also add another animal into the mix – the king of the jungle – the lion. The duo can be a great topic for a sleeve tattoo and a lion and wolf hand tattoo idea. If you feel royal and aggressive enough to risk your stakes and get the most out of life, then this tattoo design is really worth the splendid body art you are looking for. Animal tattoos like this can be a personification of who you are inside.

If you are looking for a cute and satisfying wolf tattoo idea, then this could be one of them. The green eyes of the wolf make it look like a Japanese wolf, however, even if you do not go for the idea of a Japanese wolf, you can still keep the tattoo adorable. The simple wolf tattoo does not carry details of an angry wolf but considers wolf as a gentle spirit. Since dogs evolved from wolves and are now, our best friends, this can be a great insight into evolution. The wolf tattoo is large enough to be converted into a wolf shoulder tattoo and it can be a wonderful Japanese wolf tattoo idea too. This is one of the best wolf tattoo designs out there.

If you are a feminist and want to show the powerful side of you, then a wolf photo with a woman backing it up can be a wonderful tattoo for you. This is wolf sleeve tattoo of an angry wolf. The details on this tattoo is on point and with the addition of the calm woman, it makes the meaning even more powerful – that being an alpha is not just something related to men – even a woman could lead the wolf pack if they want to – or be the lone wolf. The addition of a dream catcher also puts this wolf tattoo in the tribal wolf tattoo category.

Wolf tattoos do not have to be kept within these short categories all the time. If you want, you can be creative with your wolf tattoo ideas and make a go for some other kinds of tattoos. In general, wolf tattoos are one of the most common animal tattoos out there. A small wolf face tattoo can cost around $50-$150. Here are some wonderful suggestions for you that will make your journey to get a wolf tattoo even more interesting and easy: