10 Best Witcher Wolf Tattoo Ideas You Have to See to Believe! 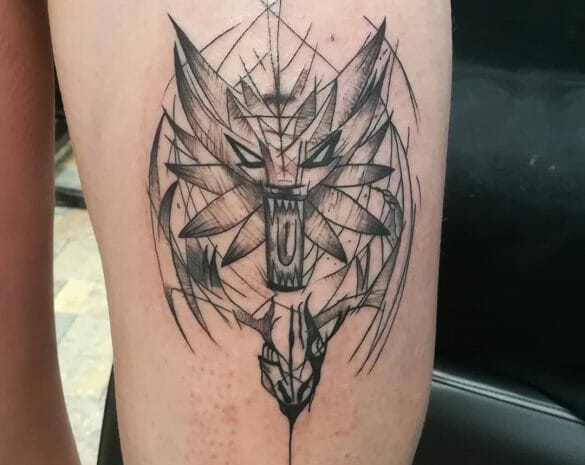 Looking for the best witcher wolf tattoos? No wonder your search led you here! Find some of the best wolf tattoos that show loyalty to the source!

The Witcher series was created by Andrzej Sapkowski, a Polish author.

The series gained a huge fan following in its native Poland and soon after, a game was created based on the books. The witcher games brought the series to mainstream after which it garnered a fan following all over the world.

The story follows Geralt, also known as the White Wolf who took his training from the School of the Wolf as he makes his way through the world as events progress around him pitching Geralt up against monsters and humans who he slays in creative ways throughout his journey. The Witcher series actually gained even more popularity through the video game adaptation of the story in the form of The Witcher, The Witcher 2, and The Witcher 3: Wild Hunt. Thanks to the popularity of the series, the tattoo world also saw an increase in the witcher tattoo designs that often incorporated the imagination and passionate nature of the series in awesome tattoos.

The Witcher series has various bold characters and creatures that have been adapted into the form of tattoos, with the witcher medallion being one such design that has been tattooed by true fans all around the world alongside the tattoo designs of witcher signs, swords, and characters to create a great blend of witcher tattoos.

In the Witcher series and video game, the Wolf medallion is one of the most recognized and iconic symbols as it is famous for being the school Geralt, the main character of the series.

This wolf medallion tattoo is drawn by the tattoo artist in a completely black tone that helps in bringing out the best of the witcher wolf tattoo.

If you are an avid witcher fan of the witcher game or the white wolf himself, then this cool tattoo should be one of the many medallion tattoos that you should totally think about getting inked on your body, especially on the wrist or the forearm as this location is hard to miss!

Since its release in 2015, the 3rd entry in the Witcher game series, the Witcher 3: Wild Hunt, has garnered a huge fan following all around the world because of its amazing character cast and a story that will satisfy you till the end. Such is the popularity of the game that several tattoo ideas have been taken from the video game and inked on the bodies of witcher gans all around the world.

This witcher wolf tattoo design takes a colourful tone as it uses the wolf medallion as a frame to point out the stand that Geralt takes against one of the eeriest creatures in the game in the form of a Leshen.

If you are a Witcher fan and want a tattoo that is ripe in style and forms then this cool-looking witcher wolf tattoo will be a perfect match for you!

The Witcher Wolf Head Tattoo Design From The TV Show

If you are familiar with the witcher tv series then you’ll have noticed that the design and features incorporated into this witcher tattoo are taken from the tv series.

This tattoo design features the logo from the hit Netflix show by using a circular design that uses the wolf imagery. The ink work is done in a great way that is easy to recognize and will be a great addition to any part of your body.

If you are not a fan of the series, then you can also get the logo from the video game tattooed with the same black ink work. Not to forget, that if you don’t like the base design you can easily add witcher signs or creatures like the griffin, or spend your time as you research more images for your rendition of the tattoo.

Witcher tattoo ideas like this design work best on the forearm or the wrist as these are some of the most visible parts of the body and will look great on both guys and girls.

There are a lot of witcher tattoos that often depend on the frames and the elements included in them to create a tattoo design that benefits the excess amount of information incorporated into the tattoos. However, if you are a fan of clean and simple witcher tattoos then this design is something that you should think about!

Witcher tattoo ideas like this design are perfect for witcher fans who would like a simple tattoo that is clean to look at and gives the feel of an amazing witcher wolf design that when laid eyes upon will become the talk of the town among your friends!

If you’re not a fan of breaking the bank on a tattoo or sitting through several hours of pain, then this tattoo will be great for you as there’s hardly anything that can go wrong with this.

Shaded tattoo designs are one of the most common tattoos in the market as they help in creating tattoos that require no colour filling and are a great way for tattoo artists to go through the process of creating a design that may or may not look simple depending on the details going into such tattoos.

If you like simple tattoo designs with lots of colourwork, then witcher tattoo ideas like this shaded design will be great for you.

And if you’re feeling adventurous enough, you can ask your artist to integrate small elements from the game or the books like witcher signs or bring your tattoo to life with a picture of your favourite character integrated into these witcher tattoo ideas.

Geometric tattoos have seen an increase in their representation as they have become one of the most common art forms used in the world of tattoos. For a witcher fan, geometric tattoos can be a great style as you can add your own bit of personality into the design that will fit your body and will blow the mind of people who lay their eyes upon this design.

This witcher wolf tattoo uses shapes and figures to create a frame for the wolf tattoo with the witcher logos incorporated into the idea and as a lucky witcher fan, you have the option to create a design that is to your liking. Witcher tattoo ideas like this design are perfect for the forearm but if you dive into the tattoo pool of placements, you can also get this inked on your neck or legs, or any other part of the body.

This witcher tattoo uses the wolf symbol as a scabbard for the swords that Geralt carries with him, one for monsters and one for humans.

The background of the tattoo is lightly shaded to give it a washed-out look and the floral pattern behind the wolf portrait makes the art a bit prettier. The witcher signs of Yrden, Igni, and Aard can also be seen in the design to give it a better look.

This colourful tattoo design focuses on the wolf medallion from the game and creates a beautiful and stylish look that any fan of the white wolf will appreciate!

The wolf portrait shows off the fierce nature of the wolf and puts the wolf between a frame created by the witcher signs of Igni, Yrden, Axii, Aard, and Quen. If you are not satisfied with the base design, you can add comments or quotes from the witcher series to make this tattoo your rendition.

Colourful tattoos are an absolute treat when done right and this piece of art is one of them as it takes inspiration from the video game and creates a tattoo that is stunning to look at with all the features included in it.

The ornament is used as a scabbard in which the silver sword is sheathed and is surrounded by the witcher signs which are framed in different colours to give the design a more appealing look. Tattoos like this will look good on any part of the body, but if you want to flaunt it, you can get this inked on your arms.

This full-sized wolf tattoo is one of the best, if not the best, witcher wolf tattoo design that is suited to both the guys and the girls who are avid fans of the series and want to show their love for the personas and the wolf necklace that Geralt keeps on his body.

This tattoo is a stunning artwork as it creates a full-sized design that runs from the shoulder all the way to the hand and uses the wolf to sheath the swords that Geralt carries with him.