10 Best Wolf Half Sleeve Tattoo Ideas That Will Blow Your Mind! 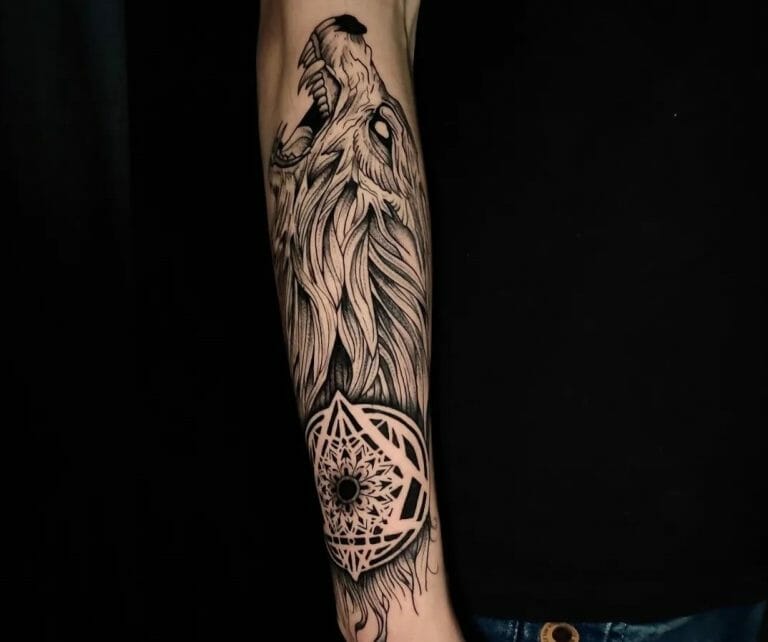 Are you looking for some attractive tattoos? Then you have come to the right place. We have some of the best wolf half sleeve tattoo ideas for you!

Wolf tattoo ideas are some of the most popular animal tattoos when it comes to tattoos.

Wolf symbolizes the protection of family, bravery, and loyalty. There are some amazing body art ideas that not only look elegant but are also bold and show the fearless side of a person.

If you think you are a pack animal or even a solo adventurer, a wolf tattoo is what you need because that will constantly remind you of the great adventures yet to come.

A wolf head tattoo is one of the most popular choices of tattoos for men. There is no ideal placement of this tattoo, in fact, it looks good on different body parts. They can make for a great tattoo on the forearm, leg, back, and chest. They look appealing in all forms, big or small wolf tattoo.

When making a wolf head tattoo, the most important part a tattoo artist has to take care of is the expression on the face of the wolf tattoo. A snarling wolf or a howling wolf tattoo is a sign of an intimidating and aggressive presence of a person and if a wolf has a passive and calm expression, that wolf tattoo brings out the spiritual side of the person.

This particular tattoo shows the wolf looking straight with a calm expression. The wolf head tattoo is made with small black ink strokes that give the fur of the wolf a very realistic vibe. Below the wolf is the scenery that shows mountains and a moon with trees all around. In that scenery is a small wolf tattoo that is shown howling at the moon in pure black ink. These tattoos are generally tattoos for men.

This realistic wolf tattoo is beautiful and will be a definite topic of discussion among your peers. This tattoo has a lot of elements, there is a lone wolf in the center of the tattoo with a cave-like structure beneath it. It appears as if a man is walking into the unknown. The eyes of the wolf have a hint of blue in them that make the lone wolf look grave. The clouds are made with black and grey ink that gives a serious and dark vibe to the tattoo. This wolf tattoo has an in-depth meaning and is one of the best wolf tattoo ideas for men.

A very appealing trend that is catching on is forearm tattoos. The most popular designs for a wolf forearm tattoo are generally a wolf head or a wolf eye. This is because such designs don’t require large spaces, they can go around like a sleeve on the forearm. A wolf forearm tattoo is considered to be very impactful because when your sleeves are down, they are not visible, and once you roll up the sleeves, the tattoo is there and visible looking powerful. They are also considered great conversation starters which have a unique feeling.

This particular wolf forearm tattoo has many meanings and they vary depending on the different designs. This tattoo includes the wolf head in the center, which has a compass on one of its eyes, below the head is a wolf calmly walking, probably on a hunt, and on top of the head is a moon tattoo that is a symbol of transformation.

A howling wolf tattoo sure looks cool, however, they can turn out to be really meaningful. A very recognizable ‘call to the wild’ is the howl of a wolf. Not many people know that a wolf generally howls to make a mark on their territory or to communicate with their wolf pack. A howling wolf tattoo is one of the most popular tattoos for men. Many guys love to think of the wolf as their spirit animal. This kind of tattoo generally means that you have a very strong connection to your family or pack and you are a strong person able to speak your mind.

This particular howling wolf tattoo is made with intricate black strokes, thick and thin. The face of the wolf looks fierce and the open mouth shows a snake-like tongue and sharp teeth. With shades of black and grey in the tattoo, it seems deadly and also has a deep meaning attached to it.

The meaning of an angry wolf tattoo can vary according to the expression of the wolf. An angry wolf could be snarly or roaring or even designed in a stance ready to attack. Being a symbol of fearlessness and strength, the angry wolf tattoo is a great idea for a tattoo for men. These tattoos are very expressive and can appear to be very bold. Some tattoos also have red or blue eyes that generally show shock and fear.

This wolf half sleeve tattoo features the head of a snarling wolf with sharp teeth. Below the head is a forest and a full moon tattoo. The tattoo is made with soft strokes that make the tattoo more realistic. It is made on the upper arm but can be placed on other body parts. It could be made as a wolf chest tattoo, wolf shoulder tattoo and wolf sleeve tattoo.

Animals are one of the best ideas to include in a tribal tattoo. Tribal art is generally made with black ink and has tribal art all over it. A snarling wolf or a howling wolf are some great choices to include in a tribal wolf tattoo. There are more designs that can be added to make the design more versatile. If your ancestors belong to some heritage, you can include those kinds of designs to it to give it a tribal look.

This tattoo of a wolf face is one of the best wolf tattoo ideas for men. This is more in style with the traditional wolf half sleeve tattoo because it has flowers and other designs on it. This tattoo shows a fierce wolf surrounded by flowers. The predators have a power that is offset by the quality of the flowers like harmony and balance.

Traditional tattoos are specifically chosen as popular designs for tattoos for men. With the right kind of designs and colors, this type of tattoo will not only command other people’s attention. People also tend to get creative with this kind of design. It shows off the creativity and artistic side of someone’s personality. Traditional tattoos generally have designs like animals and daggers.

This particular tattoo is a wolf made with ink of black and red shades to show that it’s fierce. There are small white stripes on the borders which give it a traditional look. There is a sword, which is a representation of protection and bravery, that is going through the center of the wolf.

According to ancient folklore, werewolves were ferocious creatures who came out on full moon night to hunt. Not many know, that werewolves are misunderstood creatures, but they are also feared and powerful. The werewolf culture became popular after several popular TV shows and movies adapted them as characters. The symbolism of a werewolf’s tattoo symbolizes the demons within oneself that every individual is fighting with. A tattoo of wolf is often combined with a moon tattoo to give it a more meaningful effect.

This tattoo is more toward dark tattoo ideas where the artist has made sure to make intricate strokes with the ink of black color that gives it a realistic look. To show the battle with the inner self, there is a thick chain surrounding the wolf’s head. The eyes look calm and passive. Below the wolf face, there is a moonlit forest to show the dark side of a person.

These types of tattoos are generally made with geometric shapes like triangles, circles, and squares which are some of the oldest shapes in ancient history. The shapes also connect the wolf tattoo to nature with its uniqueness.

This tattoo has a wolf head but the eyes are made with blue ink which brings it special attention The triangle on top looks like a mountain and shows a connection to nature.

If you are still looking for some wolf tattoo sleeve designs, then all you have to do is input the right search keywords in your search box and press enter. You will be presented with several different best wolf tattoos like a lone wolf tattoo and a wolf howling tattoo. If you wish to get a tattoo with a relative or a friend, there are many matching wolf tattoos for it. Here are some other idea options for you to choose from –