10 Best Small Wolf Tattoo Ideas You Have To See To Believe! 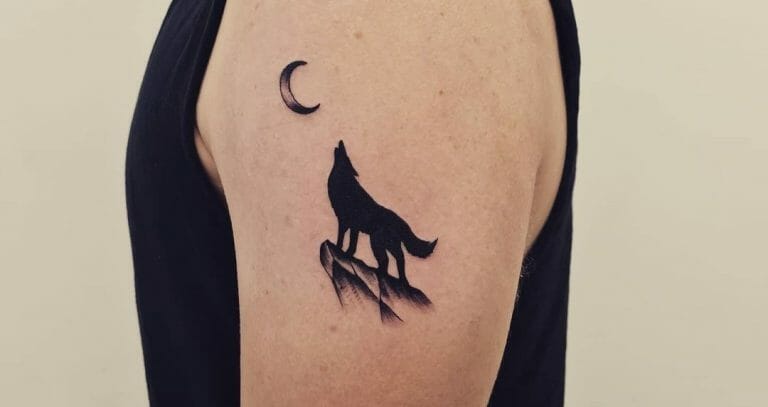 Are you looking to get a wolf tattoo? Then check out this list of 10 small wolf tattoo designs in different styles and colours.

Wolves are known to live in packs and hunt in packs.

A wolf represents protection, family and loyalty. This is why people love getting wolf tattoo designs to portray these qualities.

Animal tattoos, like the wolf, symbolize strength. Wolves are known to trust and follow through on their instincts, especially in difficult and dangerous situations. Wolf tattoo designs can be made from small tattoo designs, or wolves in the wild, an angry wolf, a snarling wolf or a howling wolf or even a mandala wolf tattoo. As we will explore in the designs below, wolf eyes are a striking feature and reflect the wolf’s wilderness and hunting skills.

These black wolf tattoo designs show two small wolf heads merged together. A creative twist and turn has been given to this small tribal wolf tattoo. A crescent moon inverted downwards in the black color is designed on top of the wolf head. Also, the wolves share one common eye, which appears to be bleeding. The wolf’s tattoo shows their tongue hanging from the mouth with sharp teeth jutting out. The entire tattoo is drawn in black ink and the wolves’ faces are shaded with dot work. The wild nature of the animal is shown through these small wolf tattoo designs. This small wolf tattoo representing kami spirits can be done on various body parts. The ideal placement would be the wrist or forearm. You can also get them on your shoulder or chest area as well. Most men choose these awesome tribal wolf tattoos showing Shinto gods and all the details of a wolf howling.

This wolf tattoo, small, simple shows the natural behavior of wolves. This wolf is howling looking up at the moon. This elegant wolf tattoo features the wolf standing on the edge of a cliff. The wolf is drawn in solid black ink and the cliff has a realistic design with subtle shading. The crescent moon in the sky is black with a little grey shading.

Traditional wolf tattoos for men and women, like this one, that show the wolf in his natural habitat are quite popular. This idea can be designed and adapted as a watercolor wolf tattoo. This wolf tattoo small in size can be done anywhere in your body parts. You can place this tattoo on the shoulder or forearm or even wrist like a small simple wolf tattoo. The awesome tribal wolf tattoo designs including the moon can be inked on the chest or back as well.

This wolf tattoo is a contradiction to other black wolf tattoo designs. Most tattoos we have seen so far show the wolf being aggressive or howling. However, in this lovely tattoo, the wolf is holding a red rose in his mouth and almost looks as if he’s smiling. The wolf’s face is inked in fine lines and shading of grey, black and white. The striking blue eyes of the wolf stand out from the rest of the features, and contrast the red rose.

This tribal wolf tattoo represents loyalty, care, and love. Compared to the lone wolf tattoos for men, this one is good contrast, a friendly wolf with blue eyes. You can work with a talented tattoo artist to recreate this as a watercolor wolf tattoo and make the design more memorable. This tattoo is placed on the side of the torso as it needs a large canvas.

Far from the snarling wolf or howling wolf tattoos, this one is quite calm. A geometrical wolf tattoo design would pair well with this mandala design. As shown in the picture, this design looks wonderful as a wolf forearm tattoo. You can get this tattoo as part of a lone wolf tattoo sleeve or just as individual wolf tattoos for men and women.

This howling wolf tattoo is done with a single-line freehand drawing. With a minimal design, this is one of the most creative howling wolf tattoos. A single line connects each element of the wolf head and merges into the crescent moon design right behind the moon.

This wolf hand tattoo design is one of a kind. You can get this wonderful wolf tattoo on your chest, forearm, shoulder or even on your legs. You can get a geometric wolf tattoo drawn in the same freehand manner.

This tattoo is a stunning combination of a small geometric wolf tattoo and a tribal wold tattoo. Split down the middle, the right of this tattoo shows the wolf in clean black brush strokes depicting the fur, and one eye, and ear. On the left side, there is a detailed wolf design done in geometrical lines and shapes. The geometric shapes are filled in solid black or have black lines. Combined, it shows one smiling wolf with a thick mane and captivating eyes. This tattoo is placed on the left side of the chest and utilises the large canvas quite well. If you are looking for hybrid wolf tattoo designs that are artistic and raw, you can try this one!

This wolf pack tattoo shows an adult wolf and a cub wolf, both howling with the moonshine falling on them. This tattoo is inked in a fine line style and uses light shading in the design. These wolf tattoos are a matching tattoo pair inked by a mother and daughter. You can get such similar wolf tattoo designs with your parent to showcase the bond and connection you have with each other. This tattoo can show a connection with your family and life. You can have this tattoo on your shoulder or wrist.

Here is realistic wolf head tattoo inked in black and dark grey lines with a name inscribed below it in calligraphy style. This is a wonderful gesture to dedicate a tattoo for a loved one or family member. This small wolf head tattoo is placed on the forearm and does not occupy too much space. One of the best ideas for wolf tattoos for men and women, you can place this on the shoulder or wrist as well. You may choose to get this wolf tattoo design with realistic wolf colours or change the font type as per your preference.

One of the most realistic wolf tattoo designs so far, this one looks assertive and bold. The wolf face is detailed in dark, thick lines. The wolf’s piercing golden-yellow eyes highlight the wolf’s fierce behavior. The wolf’s smiling face seems contrasted with its golden gaze. This tattoo is inked on the forearm and has a finished, clean look.This wolf head tattoo is a good option for you to have on your hands.

If you are looking for more exciting wolf tattoo designs, then you can take a look at our suggestions below.