10 Best Traditional Anchor Tattoo Ideas You Have To See To Believe! 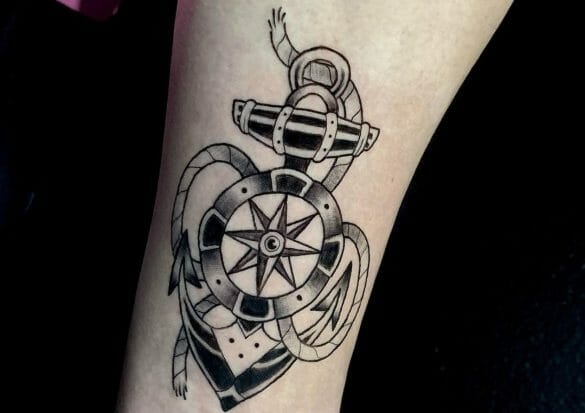 Are you thinking about getting a tattoo but need some inspiration? Check out our excellent list of anchor tattoo designs for your next tattoo!

Anchor tattoos are one of the best tattoo designs if you want a deep meaning behind your design.

There is a rich history about anchors and why they are symbols of hope, stability, honour, and strength. Sailors would get an anchor representing strength, stability, and spirituality as the anchor’s shape is similar to the Christian cross. Traditional anchor tattoo designs included a simple anchor, such as the traditional navy anchor tattoo. The contemporary tattoo designs have evolved with time and now include different components such as ropes or flowers. If you want you can include a symbol for change or you can add a snake to the anchor design. Anchors traditionally represent strength, whereas snakes represent fertility. Small anchor tattoos are one of the most popular designs people choose. In early Christianity, the anchor represented the cross, but that has changed over the years. Other objects can be incorporated into the tattoo design. Metaphorically the tattoos represent weathering over stormy weather and surviving.

You can choose a traditional anchor tattoo design that best suits your taste. Read to find out more about some anchor tattoos and their symbolic meanings.

Amy Winehouse was one of the first celebrities to make the fouled anchor tattoo design famous. Her tattoo represented the hardships that she had gone through but unfortunately was not able to overcome.

This colorful anchor tattoo is considered to be “Neo-Traditional” as it has a rich colour palette. They combine the components of traditional tattoo designs with contemporary tattoo designs. The placement of this tattoo can be ideal done on the upper arm of the left arm. This design also incorporated red roses as a symbol for a new journey and finding stability. The rope design has also been included to symbolize stability.

This design was popularized by Kelly Osbourne. These designs are brightly coloured and do take a while to be completed.

This design is a personal tattoo choice as this symbolizes surviving through an intricate part of your life. This particular tattoo has incorporated the infinity symbol. This tattoo art is considered to be traditional, and this anchor represents strength. This design follows the design of traditional tattoos. Sometimes people will incorporate a name with the design as they want it to represent that that person was special to them. Some people also like to add different symbols to their design so that it best represents what they might have experienced.

This design follows the same pattern as the “American traditional tattoo,” anchor symbols incorporated in this type of tattoo design mean you are working in the right direction. These symbols in a tattoo design could also mean that you are part of the US Navy or the Royal Navy, as many sailors choose this design. This type of design also means that you have the strength to fight through whatever life may throw at you. It also helps you stay motivated and not lose hope. This anchor tattoo is normally made on the forearm.

If you are looking for a design that represents a committed relationship or a strong connection to someone, this design is the one for you. This is one of the most popular matching anchor tattoos design. It is colourful and has the same traditional pattern. This pattern has matching anchors as well. The tattoo placement is on the hands. The tattoo artist has incorporated other elements such as flowers. This type of body art is always beautiful to look at. Sometimes people will include the names of people that are close to them. This design sometimes is a representation of remembrance for someone that may have passed away.

This is considered to be a traditional design. It is a small anchor in between your chest, near the heart, meaning it is a symbol of hope. It symbolizes that you are ready to test your own strength. Sometimes these tattoos are incorporated with a pirate ship to represent that you are moving forward in life. This anchor tattoo includes the symbolism of strength and is a pretty typical design. This is also a type of fouled anchor tattoo design and has been made with the traditional black and white ink. This design is a representation of survival and that you have made it through a rough patch in your life.

Traditional Tattoo Design With A Sailor And Anchor Incorporated

There are different meanings for the respective owners of this tattoo. This anchor tattoo has incorporated sailors or pirates. There are other symbols in this design, as the rope. The idea behind this tattoo is to show a new chapter. The anchor tattoo is a combination of traditional with contemporary. Some may say this tattoo contains the symbol of life as a sailor at sea. The eyes of the sailor are also expressive and the tattoo artist made an effort.

This type of anchor tattoo, meaning the one with the birds, has a deeper meaning. It represents hope and strength. The body of the tattoo is simple, yet it has the symbol of hope and stability with the birds. This tattoo can be made on your right wrist or other parts of the body. If there are birds that have been incorporated with the tattoo design then it means that they can choose to live the way the way they want and that no matter what they faced in life, they have made it through. It symbolizes that they are not afraid of change and they are going to live their life with honour. If the design has birds in flight they represent that you are free.

Some people prefer to have their tattoo in colour and have a bold colour choice. There are several different meanings to why there should be a heart in the middle of the tattoo. One of the meanings is that you are looking into your soul and what you want your life to represent something beautiful. A rose tattoo represents resilience and that your life has a beautiful meaning. This also represents that no matter how bad life can be you are able to make it through. This design is more for motivation. Traditionally when we think about roses we only think about the petals and the rose themselves we forget that it also has thorns, so tattoos have incorporated roses as a way of saying that we may look happy, but there is a lot that we have had to fight in order to reach that point in our life.

A sacred heart tattoo design is considered to be part of the traditional tattoo design. So the design has incorporated two elements of traditional designs and made it into this beautiful masterpiece. Anchor tattoos, in general, are considered works of art in themselves and are the most expressive tattoo designs. The scared heart is also a representation of Christianity the same way an anchor is, so this could also mean that you are trying to get in touch with your spirituality and who you are as a person.

Traditional Anchor tattoos represent protection, solidarity, and the willingness to change. For men, this could also mean a sense of belonging. For women, this represents a new chapter in their life that they want to embark on. Anchor tattoos are not common tattoos and there are lots of variations of them. Here are some ideas for traditional anchor tattoos if you are looking to get one: