101 Best Tattoo Wrist Ideas That Will Blow Your Mind! 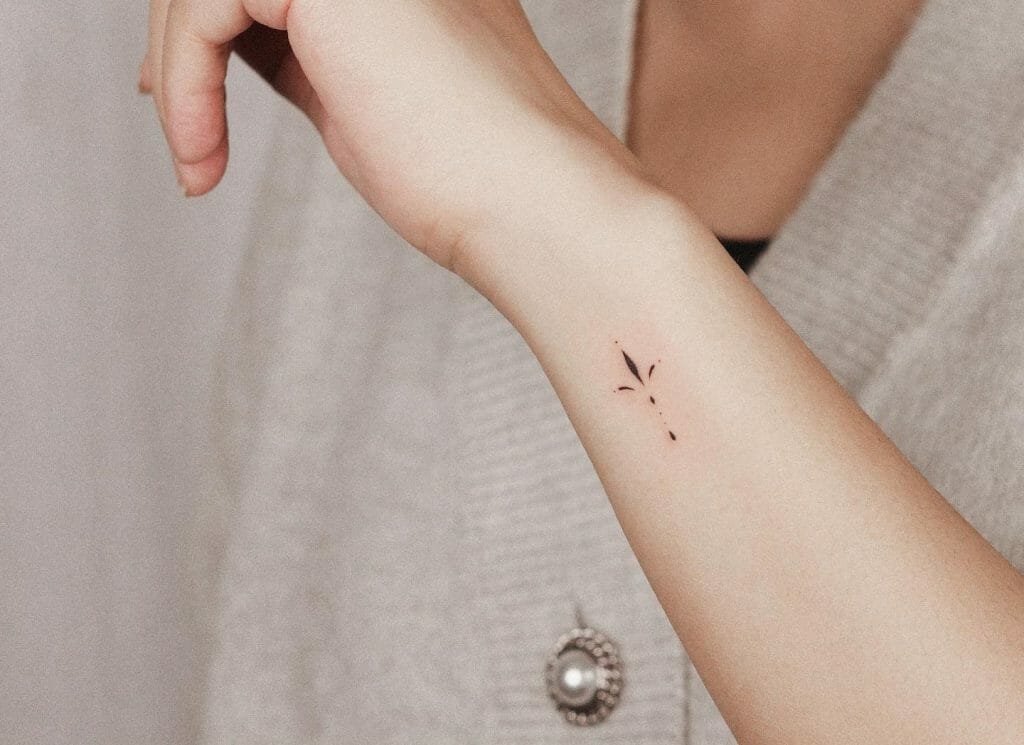 Looking for some beautiful designs to ink on your wrist? Then we have to offer you some of the best tattoo wrist ideas that will go with all kinds of personalities.

The concept of wrist tattoos has been existing for quite a while and its popularity seems to increase with passing time.

A cool tattoo on the wrist of men and women makes them chic and classy. A wrist tattoo is also considered to be one of the best places to get a unique design by tattoo artists since it is one of the least painful and most revealing spots on the body.

Whenever we think of a wrist tattoo, we think of dainty tattoo designs with lots of fun elements to attract every eye to it. The wrist tattoo designs along with the wrist placement give an edge to the tattoos irrespective of the area the tattoos cover. So, it is always better to conduct a good deal of research to know what’s in the trend and what goes with all moods before getting inked in such a revealing space.

The wrist makes a small canvas, so a small wrist tattoo looks niche and tidy. A small tattoo on the wrist is ideal for women with petite wrists however, the large variety of small wrist tattoo ideas attracts both males and females. The adorable wrist tattoo is a beautiful yet simple design to take inspiration from.

A dainty heart is tattooed on the left wrist with a plain white flower on the right one. This wrist tattoo comes in a combination of a beautiful flower and heart tattoo but, you can also utilise them separately as a heart wrist tattoo or a flower wrist tattoo. This small tattoo idea is perfect for inking on the wrist and the end result will totally be worth it.

Another simple yet chic wrist tattoo idea to make your body art stand out among the crowd! The fresh green leaves tattoo on the wrist symbolizes youth and energy. It also shows your appreciation for mother nature and peace in life.

This green leaf tattoo looks marvellous when tattoed on a small space such as the wrist. Even though the tattoo is a tiny one, the colours are used in the perfect balance to contour and highlight the best part of your wrist and make it an appealing one. One thing to notice in this tattoo is that the wrist tattoo is inked on the inner wrist which is a very painful region to get inked because of the tenderness of the skin. Due to its placement, the tattoo might cause heavy pain because of its small details, but it will be worth it.

The inner part of the wrist is not a necessarily visible portion, it is also a painful region to get a tattoo so you should be careful about picking a design for this region. If you want to ink something close to your heart, then this is a great spot. The placement of wrist tattoos on the inner part is also ideal for daily reminders and meaningful symbols like the infinity symbol.

The infinity tattoo symbolizes the will to hold on to your loved ones for an infinite amount of time. Often we see people adding the names of their loved ones to their infinity tattoos. The inner wrist tattoo is a great design, it is detailed minimally using fresh green leaves. The green leaves form a bridge between the two infinity loops adding a fresh and youthful vibe to the tattoo.

This incredibly cool Marvel wrist tattoo has got to be your go-to design if you are a huge fan of the Avengers. Avengers fans like to incorporate a sign of their favourite superhero in all walks of their life and nothing can be better than getting an Avengers tattoo inked on the wrist. Perks of getting a Marvel theme tattoo on the wrist? It will be visible to all and no one will doubt your love for the superheroes.

Three symbols are used to depict the three most powerful heroes of Avengers, Thor, Iron Man, and Captain America. In the tattoo, we see miniature versions of Thor’s hammer, Captain America’s shield, and Iron Man’s logo. Rather than making the tattoo edgy and realistic, the artist went after adding comical touch to it which makes it look adorable and suitable for the wrist.

Are you tired of all the common small wrist tattoo designs? Then try combining and matching a few small motifs together for making a tattoo design that covers the entire wrist. A wrist tattoo but a bigger one is both unique and offbeat just like this given piece. The wrist does not necessarily make a big canvas, so intricate designs are very rare to find on wrist tattoos. However, the tattoo placement and a planned design can make space for big tattoos even on the wrist.

The placement of each motif in this full wrist tattoo is planned carefully so the tattoo appears well organized. On the upper part of the wrist, a moon in its crescent phase is designed artistically. The tattoo continues downwards as a hand tattoo with a beautifully detailed butterfly on the top of the palm, located below the wrist. Leafy motifs surround the moon on the wrist from above extending towards the elbow. Such types of wrist tattoos cover the entire wrist as well as parts of the hand.

A tattoo encircling the entire wrist just like a bracelet or a wristlet is a wrist bracelet tattoo. Wristlet tattoos are a particularly favourite choice of girls. Most men prefer a wristband tattoo instead of a wristlet tattoo since the latter has a greater feminine touch to the designs. Most wristlet tattoos come in floral designs. Getting such illusive tattoos makes your wrist look graceful all the time and keeps you ready for all occasions

The two wrist tattoos are perfect examples of wristlet tattoos, both of them have floral designs as discussed earlier but they look absolutely different. One comes with flowers while the other looks like a chain of leaves giving more of a beachy vibe.

If you are looking for sober small tattoo ideas on the wrist, then inking a butterfly wrist tattoo can never go wrong. The inner wrist is a popular location to ink a small butterfly on the wrist like the one in the picture. This inner wrist butterfly tattoo is not only unique, but it also looks elegant. Apart from that, the idea of finishing off the left wings using floral motifs is by far the most offbeat butterfly tattoo idea that you can put your hands on. A design of this nature shows the supremacy of your taste.

You can also ink a butterfly wrist tattoo on side of wrist. A series of small tattoos inked in sleek designs on the side wrist is a common body art often found on this part of the wrist.

Tattoo lovers see the body as a large canvas to create abstract art on the skin. Likewise, the wrist is a great spot to ink something with deeper meaning. A meaningful tattoo can have personal or general meanings. They can also come in varieties of encouraging and inspirational quotes.

The words ‘you can’ might seem simple but to a person struggling to achieve something in life, these two words can move mountains. You can also get a ‘You Can’ tattoo on your wrist if you are looking for inspiration in your life. The simple tattoo is made chic and classy with a stylish font adding to the fashion quotient of the body art.

If the words classy, unique, and offbeat describes what you are looking for in a tattoo, then third eye wrist tattoos are ideal for you. The third eye tattoo on wrist is a classic choice for people with superstitious beliefs. The third eye tattoo symbolizes the ability to foretell the future and be cautious in every step.

On the side wrist, three phases of an eye are inked, a closed eye followed by a half-open eye, and finally an entirely open third eye. Even though it is a minimally designed line tattoo, you can ink this piece without a second thought because of its uniqueness. A tattoo of such greater depth attracts the most intellectual eyes on the street.

Bird tattoos are a diverse genre, you can get a bird tattoo inked in any part of the body including the wrist. The skin area of the wrist is small, this makes it difficult to ink an intricate bird design there. However, if you are eager to get birds inked on the wrist, then the design can be an ideal match for you.

A series of birds are inked in the narrow area on the side wrist. They are not intricately detailed but the overall design is attractive enough to turn all heads towards the wrist tattoo. Flying birds are a symbol of free will, inking it in a visible part of the wrist means people will readily be aware of your true disposition. Such simple ideas for wrist tattoos are perfect for those getting inked for the first time. Alternatively, this design can also be used as a wristband tattoo.

How much does a wrist tattoo cost?

A wrist tattoo can cost anywhere from $50 to $200, depending on the size and complexity of the design. Larger and more intricate designs will obviously be on the higher end of the price range. Wrist tattoos are generally less painful than other types of tattoos, due to the relatively small area that is being tattooed. The pain level will also depend on an individual’s pain tolerance.

How painful is a wrist tattoo?

Wrist tattoos are generally less painful than other types of tattoos, due to the relatively small area that is being tattooed. The pain level will also depend on an individual’s pain tolerance.

How do I care for my wrist tattoo?

After getting a wrist tattoo, it is important to keep the area clean and dry. You should avoid submerging the tattoo in water for at least two weeks. When washing the tattoo, be sure to use a mild soap and warm water. Gently pat the tattoo dry with a clean towel. Apply a thin layer of fragrance-free lotion to keep the tattoo hydrated. Be sure to avoid sun exposure and excessive picking or scratching of the tattoo.

What are some of the most popular wrist tattoos?

How bad does a wrist tattoo hurt?

Wrist tattoos are generally less painful than other types of tattoos, due to the relatively small area that is being tattooed. The pain level will also depend on an individual’s pain tolerance.

What does a butterfly tattoo mean on your wrist?

Butterfly tattoos are often seen as a symbol of transformation and new beginnings. They can also represent femininity, grace, and beauty. Butterfly tattoos on the wrist may also have personal meaning for the individual. For example, some people get butterfly tattoos to commemorate a loved one who has passed away. Others may get them as a reminder to always stay positive and hopeful.