10 Best Womans Body Tattoo Ideas That Will Blow Your Mind! 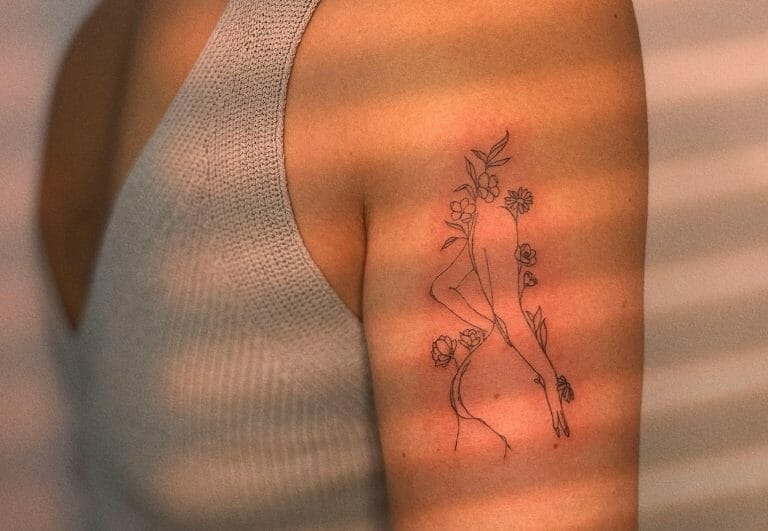 Are you looking for some rare tattoo designs for women? Here are a few of the best womans body tattoo concepts which y’all might like!

A woman’s body tattoo is quite a unique tattoo idea in the tattooing industry.

Tattoos for women are quite feminine and are very popular among teens and young adults. These kinds of body tattoos need a very minimal amount of work in them.

Women body tattoos can have a lot of meaning. It is a symbol of love, beauty, grace, desire, fortune and freedom. As tattooing is a permanent phenomenon one must keep in mind the meaning of the woman’s body tattoo. This is because the tattoo is to reflect and attract the positive elements that it depicts.

Here are a few mind-blowing tattoo ideas which might attract your attention!

Tattoo For Women On Shoulder

A shoulder tattoo is one of the most preferred tattoos. This is mainly because a shoulder tattoo causes less pain than any other tattoo. Women’s body tattoos can represent a lot of meaning and when it is linked with flower tattoos it depicts something very meaningful. The women’s body art signifies femininity, independence of a woman and good luck. Whereas floral tattoo depicts love, death and hope. Hence this type of tattoo design conveys a very deep interlinked meaning.

In this design, the tattoo artist has inked a tattoo on the back portion of the should region. The head of the woman is replaced with a bundle of flowers, buds and leaves. The lower portion of the tattoo consists of the upper part of a woman’s body. She is hugging herself with both arms crossing each other. The entire tattoo has been done in black colour.

A skull tattoo is generally associated with death and the afterlife. It is also a symbol of bravery and it also shows that an individual is not afraid to die or take risky decisions. A tattoo of a woman depicts good charm and fortune.

Here in this body tattoo for women, the artist has inked this tattoo on the waist region. In this tattoo, there is a woman with black hair who is pulling off her shirt. Her torso is made up of a skull with black eye sockets and white teeth. If someone is in search of an eye-catching tattoo then they can definitely opt for this unique design.

Back Tattoos For Women

In this tattoo, there is a female ballet dancer or a ballerina. She is performing a ballet dance in a ballet costume. Surrounding here there is the entire solar system. There are many planets like Saturn and more of these are rotating in their orbit. The orbit of the planets is also visible. In this back shoulder tattoo, the ballerina is using the orbits as a space hula hoop while dancing. Such a unique tattoo design conveys special meaning. So girls who are in search of tattoos that are meaningful should definitely choose this design.

Arm or hand tattoos for women are very noticeable and are fashionable as well. People who are thinking to get a tattoo for women can always go for the arm or hands.

Here is a very rare design where we can find a semi or half body of a woman and another half of the body is covered with leaves. The leaves have an eye like stricken just at the centre of it. The body of the woman begins from her shoulder and ends at her lower waist. The body consists of well-defined curves and has a beautifully drawn arm. The entire tattoo has been created in black ink. The artist has made use of fine lines to complete this tattoo. So girls in search of tattoos for women can definitely check this.

Here we have a unique design for people who are in search of body tattoos with minimal designs and work.

This is an abstract woman tattoo which is made up of geometrical lines and curves. The woman’s body consists of her lower face which includes her lips, chin and part of her ear. Coming down we can see the back portion of the lady as she is standing in that way. Her neck, part of her breast and the back of her arms are noticeable in the tattoo. The tattoo is entirely done in black ink on the upper arm. Ladies who are fond of smaller tattoos can get themselves inked with such rare abstract woman tattoo.

In this tattoo, a woman has been depicted as a butterfly. There is a face of a woman who has beautiful black hair. Her ears have been replaced with a butterfly wing. The wings have been made in multiple colours like yellow, red, black and green. And few geometrical patterns are also drawn in the wings. This is one of the most beautiful and unique tattoo ideas.

A dragon tattoo symbolizes wisdom, power and strength, peace and luck. Body tattoos which have a dragon and a woman symbolize a lot of things and have a great inner meaning. A dragon is generally linked with masculine energy and a woman herself has feminine energy. So these two elements complement each other very well.

This body tattoo has been inked on the leg just below the knee. There is a female body that is wrapped by a dragon. The dragon’s head is just on the girl’s head. They are holding each other’s hands firmly. Each and every detail of the tattoo is quite visible as it has been entirely done in black ink.

The face of a tribal girl is quite unique tattoo for women. Here in this tattoo, there is a Red Indian woman who is wearing a feathered headgear which is absolutely unique to Red Indians. She has typical tribal makeup on her face. This trial woman has a fierce expression on her face which symbolizes her leadership qualities. The tattoo has been inked on the leg with the help of black and grey ink.

There are tons of tattooing ideas for women. But one of the most preferred tattoos would be mother nature. Mother nature is generally depicted as a girl who carries with her a bunch of flowers and weeds. In this body tattoo, the artist has made an eyeless woman wearing a flower tiara on her head. She is holding a bunch of flowers across her arms. Only a half portion of the girl’s body is visible. The tattoo has been inked on the back portion of an arm.

A fish tattoo is a great symbol of wisdom, strength and prosperity. In this tattoo, the head of the girl has been replaced with a fishbowl which has one fish in it. The bowl also has water in it. There are few leaves on the neck of the female figure. She is wearing a dress made up of shells and flowers. She has crossed her arms around her upper body. This woman’s tattoo can also be referred to as a mermaid as there are few indicators like fish and shell dress. The design has been done on the upper forearm area.

There are many other body tattoos for women which we could not add to this list. But here is a list of other attractive designs: