10 Best Female Warrior Tattoo Ideas That Will Blow Your Mind! 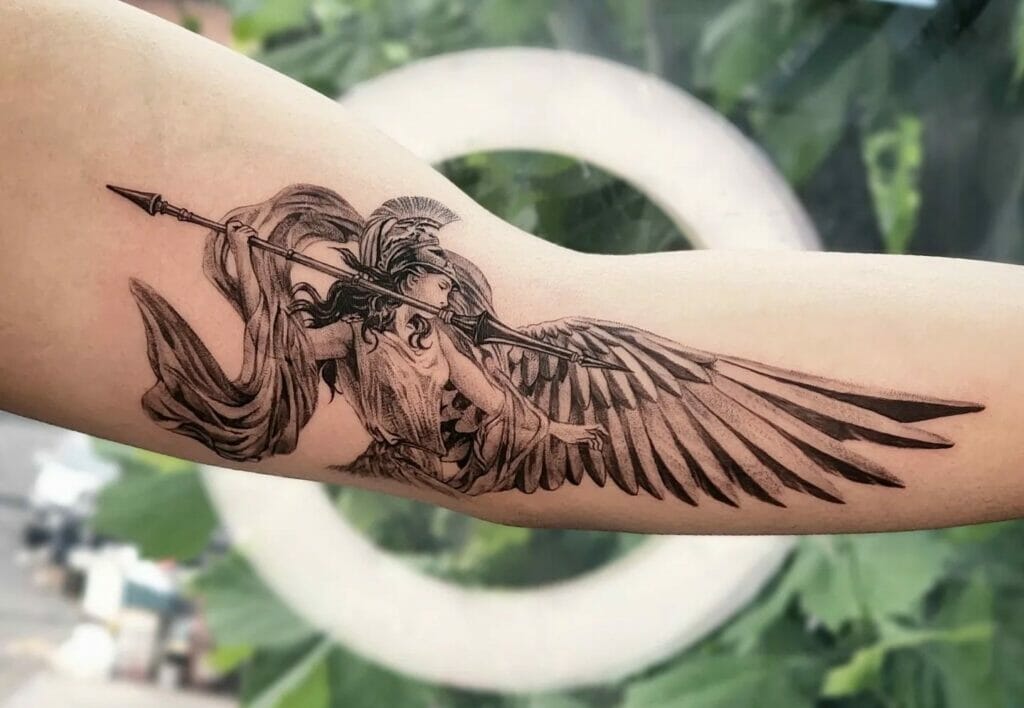 These woman warriors’ tattoo designs are trendy among girls and women. The bold and authentic representation of these popular tattoos makes them unique and exciting.

The uniqueness of these tattoos stands in their history and the creativity of the tattoo artist. Each tattoo has its own storytelling with deep meanings. It can portray the story of all those brave and fierce woman warriors who have shed their blood and sweat fighting wars for themselves and their country. The tattoo depicts the history, mythology, and folklore most aesthetically that one can simply not take their eyes and want to know more about the story behind the tattoo.

Valkyrie was the most prominent figure in the history of the female Viking warriors in Norse mythology. Valkyrie’s wings on her helmet depict the warriors on their horseback fighting in the air, and her main power is her unlimited energy, speed, and desire to keep moving.

Athena is known as the goddess of wisdom and war in Greek mythology. She fought the war with her unique strategies instead of resorting to violence.

This goddess female warrior tattoo on the arm is a good choice for all sharp-minded and intelligent females symbolizing the meaning of the phrase ”beauty with brains”. This warrior tattoo can be preferred among woman leaders and administrators who know how to maintain command and judgment.

In Japan, the Onna-musha were female samurai warriors who used to fight with male samurai warriors. These were simple and ordinary women who mainly fought to save their households and family. The tattoo looks extremely beautiful with the use of different flowers symbolizing feminine beauty, while the eyes look expressive, speaking power.

The devilish mouth of the onna-musha samurai with long spikes of teeth strongly depicts how an ordinary woman can easily switch from angel mode to devil mode in a matter of war when it comes to protecting themselves or their loved ones. This samurai tattoo can also be perceived as symbolizing the dichotomy of good and bad in a human being. This beautiful design on the shoulder can be a good choice for all housewives and mothers who would not step back from showing their bravery and picking weapons and swords when their loved ones are in danger.

In Norse mythology, Lagertha was known as one of the most powerful Viking warriors. She was an inspiration to many female Viking warriors. This warrior tattoo design also has a certain poignancy in it with the blood dripping from Lagertha’s mouth, which even explains her endurance, patience, and relentless fighting spirit.

The tattoo carries a powerful message as it has beautifully depicted the pain and struggles of all those physically and mentally strong female warriors who can fight and win any battle in life irrespective of their inner and outer wounds. The tattoo subtly describes the painful journey of a true warrior who comes out stronger after enduring any kind of physical and mental pain in a matter of war.

The tattoo looks extremely powerful with the fully confident Boudica standing tall to face her enemy, the ruthless roman warrior holding her spear and armor with her gorgeous long red hair floating in the air. It subtly explains the feelings of those girls whose voices are suppressed by the male chauvinists. This warrior tattoo design can be a popular choice among feminists who are fighting hard to break all the shackles of the regressive society.

Geisha is a warrior woman in Japan, symbolizing the power of a samurai sword. Geisha warriors were known for their boldness and mysterious charm. The tattoo has been crafted beautifully by the tattoo artist with the colors red and black ink. The geisha girl lifting her mask can be depicted as mysterious nature, eventually revealing her real side in front of the people.

The beautiful long locks with a flower make it graceful and sensual at the same time. This feminine female warrior tattoo on your stomach can speak sensuality and describe a woman’s mysterious and intriguing nature. This tattoo is the appropriate choice for people who are full of dark secrets, not much interactive and refuse to reveal their real side to the world. This makes their personality more attractive to others who become curious to learn more about them.

In Greek mythology, Artemis was the most dynamic and sharp warrior woman. She was an embodiment of freedom, self-worth, and self-sufficiency. This warrior tattoo design tells the life of all the fierce and independent women who do not need a man’s support to survive and protect themselves while fighting the ruthless world that creates new obstacles for them every day.

The tattoo has a great combination of different colors, and the use of the two beautiful flowers on Artemis’s helmet gives it a bold and feminine look at the same time. One can get this tattoo inked on their arm, symbolizing their undaunting spirit and power, ready to face any battle of life, refusing to rely on a third person’s support.

Suki is a fearless character and warrior woman which appeared in the popular anime and manga series Avatar: The Last Airbender. Suki was known for her acrobatics, martial arts, and combat skills. This warrior tattoo can be preferred by girls who excel in self-defense and martial arts. The tattoo can also be a good choice for people who connect with strong female characters, especially warriors who come as a breath of fresh air in male-dominating shows and movies.

It is always a pleasure to see female characters being equally strong and fearless as the male characters taking a stand for their respective rights, ready to pick up arms to protect themselves and fight the villains. For all these reasons, the Suki tattoo will look the most appealing tattoo on your skin. The suki tattoo looks extremely graceful with Suki dressed in her warrior outfit, holding the typical Japanese fan surrounded by a set of gorgeous flowers and leaves with her charming eyes speaking confidently, all set to face and win the battle no matter how powerful her enemy is she will not give up till her very last breath.

In Greek mythology, the amazons were considered a legendary group of warriors. Their stories were so inspirational and empowering that they appeared in many poems and epics. These woman warriors and hunters were empowered enough to match the male warriors in every field of war, be it horse riding, hunting wild animals, archery, combat skills, and defense skills. They were no less than male warriors, be it physical ability or mental ability, and at times even considered more capable and powerful than the male warriors. They possessed superhuman strength in lifting any kind of weight and easily overpowering the men. The amazons are also recurring female characters in the popular DC comics, so this tattoo can be a good choice among DC fans.

The tattoo looks beautiful with a raw, rustic, wild yet graceful look given by the tattoo artist. The use of different colors and beautiful flowers with the wild gorilla on the top perfectly describes the wild and rustic life of the amazon warrior. The nose piercing of the warrior gives it a modern touch, with the low nose piercing being the latest fashion and craze among girls. So this beautiful tattoo on the shoulder can be a good choice among modern girls who want to show the world they are no less than men in any art or field.

Bellona was known as the deadliest and most experienced warrior in Roman mythology. She had succeeded in obtaining the powers of a goddess. She had mastered many battle techniques, but her main attribute was the use of manipulation of emotions in battles. In the tattoo, we can see Bellona holding a hooter as if to declare war which explains her use of cleverness and wisdom by decoding the situations, actions, and the appropriate time to declare war.

This tattoo can easily connect with the person who knows how to use their wisdom by understanding a situation, bringing people together, and knowing how to resolve a conflict without resorting to violence.

Female warrior tattoo ideas are extremely realistic and original tattoo ideas as they carry powerful meaning and can easily connect with every woman, be it rich, middle-class, or poor. These warrior tattoo designs tell not only the journey of the actual warrior woman in history or mythology but also the struggles of the average woman of today’s times who are no less than a warrior as they battle the patriarchal society that throws a new challenge every day, but they come out stronger clearing all obstacles.