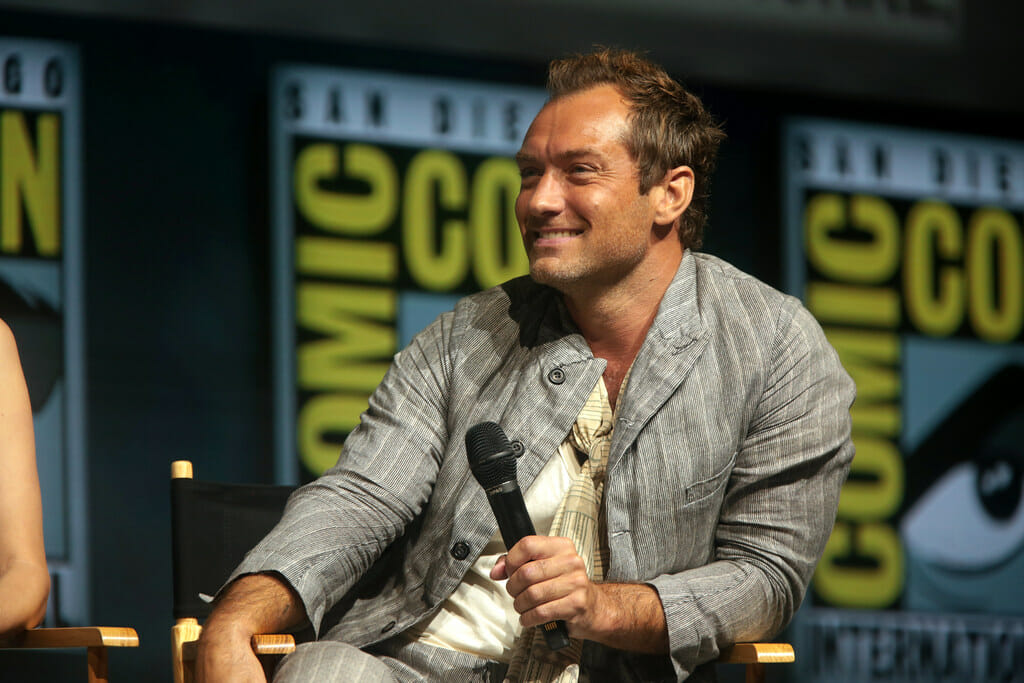 Jude Law’s hair loss has become so talked-about online, as well as in magazines. He has been a trending topic for years now, and people love to speculate if he is going to get a hair transplant surgery, or if he has had one already! Plenty of people are wondering if he is embarrassed, or he can embrace his receding hairline. Do you have Jude Law hairline? If so, let’s talk about receding hairlines & how to approach this hair issue with confidence!

Before: Jude Law Hair In His Twenties

You may not know about the previous images of Jude Law. He was an actor in The Tailor Of Gloucester as well as soap opera Families. This was back in 1989, so there is a considerable chance that your parents could remember this film or some other series more than you could.

Back during this period, Jude Law had fresh, glorious & long hair. Younger folks know him from The Aviator, Sherlock Holmes, Hugo, as well as Anna Karenina. He is an impeccable actor, as well as a male icon.

Jude was recognized as an amazing actor worldwide. He went through many images, different hairstyle ideas, as well as hair phases. His hair used to be thickest during his younger years, which is why he did let it grow out back in the day. But with roles such as Dickie in The Talented Mr. Ripley, you could slowly notice his hairline getting a lot thinner & different. This is that period where you could tell that he was going through a hair loss.

While his hair was receding above his temples, the length was still quite considering his age. This just shows that your hair can stay thicker elsewhere, but that you will lose it around your temples.

Jude Law balding became a huge thing in the film industry. You can notice that Jude’s hairline changes & that it is very rapid, as well as unpredictable. Even the actor himself stated that he could have hair around his crown, but later on, it will fall to his eyebrows. This just shows that the way you style your hair can become as unpredictable as you age.

Jude tried to experiment with many different styles during his acting years.

However, his hair was thinning at the temples. Slowly it started to create that defined deep V shape and had only left him with a lot of volume over his centerpiece. After doing the role of talented Mr. Ripley, Jude Law slowly tried to fix up his style & go for other unusual images, hairstyles, as well as thicker hairdos at the front.

During his premiere of Sherlock Holmes, everyone had questions about his hair loss journey. Some even wondered if he had done a hair transplant. Plenty of people have wondered about Jude Law age (he is 46 by the way) since it is so unlikely for a young movie star to lose as much hair as he did, at this pace. His thinning hair and the hair loss journey could have had a lot to do with stress. When you are a famous star, it can be easy to get on your nerves & to experience discomfort in your private & acting life.

Has Jude Law Had a Hair Transplant?

There have been numerous speculations about actors with receding hairlines. How does their hair loss happen, and to they get thicker hair just by getting a hair transplant?

Although Jude has never talked about his hair transplant journey, it is easy to assume that he had never had something like this done.

Plenty of people were aware that he didn’t go with this procedure since he appeared to the premiere of Sherlock Holmes in New York with a beanie on top of his head! This just shows that he was embarrassed by his head & its current state. He had to adapt his style & he tried to trick the audience by throwing this beanie. It is more likely that he has been taking some oral medications that can boost your hair growth, than that he did the hair transplant.

There you have it! From Jude’s shorter styles to his longer golden lucks and then his hair thinning. As you can see, he is still a famous star who tries his best to perform, act & shoot his movies. He has his good days & bad days, but he isn’t too embarrassed since you don’t see him rocking a beanie 24/7 on Red Carpets. His receding hairline & his hair loss have definitely been a journey and a rollercoaster of emotions. However, in his day-to-day life, Jude simply tries to use the right set of hair-care products + some oral medications. If you need an idol or an inspiration on bald & receding hairline images – Jude is your guy!