101 Best Zombie Tattoo Ideas You Have To See To Believe! 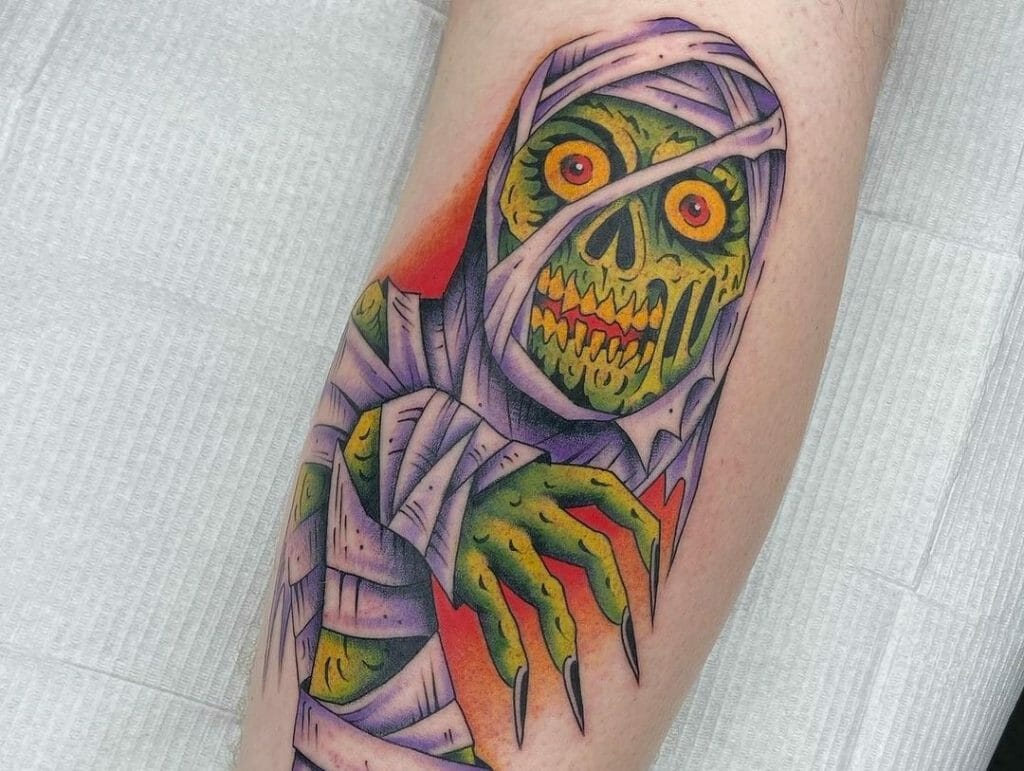 Have you always wanted to get a cool zombie tattoo? Stick till the end of this article to find fantastic zombie tattoos that you have to see to believe.

There is a fascination with these creatures in popular culture these days.

Draugr are zombies that are popular in Scandinavian folklore. They are known to guard the treasure buried in graves. It is also believed that Draugrs were cursed to walk the earth for eternity as undead creatures. Draugrs have been featured in many video games.

These undead brain-eating creatures originated from Haitian myths of Africa and were associated with voodoo. Over the years, these creatures have found a way into movies and have become a favorite movie genre. If you’re a diehard walking dead fan and want to get your zombie love etched into your skin, we have some fantastic tattoos design that you must check out.

This tattoo has great colorful details and would be the perfect choice for people fond of medieval literature and mythology. The careful shading that highlights the bone structure, fine detailing of the expressions, hair, and armor make this tattoo a piece of art. It is essential to ensure that the tattoo artist is exceptionally skilled if you want to get this tattoo done, as it would require a lot of hard work and time. We would suggest getting this zombie tattoo on body parts with a large area like the upper arm, thigh, calf, and behind the shoulder. To learn more about the tattoo and view similar kinds of cool zombie tattoos by the same tattoo artist, click the link above.

Colorful Zombie On A Skateboard Tattoo

This colorful tattoo is an excellent choice for people who want a tattoo that would draw much attention. This zombie tattoo would be the perfect choice to represent and highlight your funky and fun-loving personality through body art. The bright colors and the details make it aesthetically pleasing. The intricate details of the features and body language are unique. A zombie tattoo like this one would cost a fortune to make. Before getting a colorful tattoo like this one, you must ensure that the tattoo artist is easily accessible. Some colorful tattoos tend to lose their color sooner than black and white tattoos and need regular touch-ups. We would suggest getting this tattoo on your forearm or lower leg. There are a number of features that make the tattoo a great body art piece. To learn more about the tattoo and view more such zombie tattoo designs by the same artist, click on the link above or check out the tag.

This scary tattoo would be a great Halloween design for people who are into spooky zombie tattoos. The worm crawling out of the eye socket, the broken skull exposing the brain, flies lingering on the rotting skin add to the spookiness of the tattoo. The small details like the realistic design and shading of features like the eye and mouth would take a painstakingly long amount of hours. The color scheme and careful shading make the zombie tattoo design look even more realistic. This tattoo is determined to be a conversation starter. We would highly recommend getting this tattoo on either your upper arm or thigh, where the tattoo artist would have enough space to perfectly draw the tattoo. To see more fantastic zombie tattoo designs like this one done by the same talented tattoo artist, click the link above or check out the tag below it. Do not forget to leave some encouraging comments for the tattoo artist.

Zombies are a crucial part of the world-famous movie series ‘Resident evil’ and have appeared in almost all movie sequels. The zombie outbreak in the movie is caused by a virus known as the t-virus or the tyrant virus.

If you’re a diehard fan of the movie and want to express your love through a zombie tattoo reference, this tattoo would be an excellent choice for you. This tattoo is a true masterpiece and would require a lot of hours and hard work in making. The dominant golden and black color scheme makes it look highly aesthetically pleasing and chic. The careful shading and the black color that has been used to add depth bring out the blue in the eyes so wonderfully. The bright red color of the blood makes the tattoo look even more realistic. We would suggest making this tattoo on your upper arm, upper back, thigh, and calf. To view more such zombie tattoos design by the same talented tattooist, click the link above.

This shaded tattoo sleeve is the perfect choice for people who want a black tattoo with delicate shading and detailing. The tattoo in the picture above has been used as a cover-up tattoo over a previously made knife tattoo.

The detailed black and gray shading beautifully display a female zombie showing its fangs in rage eating a human heart, the fine details such as the veins on the heart, the wrinkles on the face, the blank eyes, and the hair falling on the front. Black and gray tattoos like this one cost less than colored ones and last for much longer. A tattoo like this one would last for eight to ten years without fading. A tattoo like this would look amazing on your sleeve as well as on your leg. You can also choose to get this tattoo on the backside of your calf like the person in the post above. To view more such cool zombie tattoos by the tattoo artist, click on the link mentioned above.

This bright purple and green-dominated color zombie tattoo is a good choice for people looking for mysterious tattoos and scary art. This extremely beautiful tattoo has a lot of attention-grabbing elements to it. The magic wand with a lot of fine detail and the expressions of the magician zombie surfing on a zombie shark with complete background details make it look like a finished piece of art that tells a story. The color scheme is fantastic with complementary colors. This tattoo would look excellent on the side of your abdomen or your back, as a ginormous tattoo like this one requires a lot of space. It would help if you kept in mind that a tattoo like this would be pretty expensive because a detailed tattoo of this size would require a lot of hours and hard work in the making process. To view more fantastic zombie tattoo designs like this one, click on the link mentioned above.

Who doesn’t like the fierce yet adorable pokemon Rattata? But what if we add a little twist to it and turn it into a zombie? This awesome yet scary tattoo is a good choice for pokemon fans as it is a perfect amalgamation of spooky and adorable. The black and red ink complement each other. The freehand airbrush shading and detailing as the blood on the teeth, claws, and mysterious eyes add to the overall vibe of the tattoo. The skulls lying in the foreground are a fantastic addition. This tattoo would require long hours of hard work. This zombie tattoo looks terrific in a particular place on your body, like your leg, arm, upper chest. To view more zombie tattoos like this by the same talented tattoo artist, click the link mentioned above.

This realistic zombie tattoo is another artistic masterpiece that almost looks too good to be true. The cool color scheme with the fine detailing and hard work put into the making process suggest that the flames wrapped around the pilot look real. This zombie tattoo is a piece of art in the sense that it tells a story through art. The burning skin revealing the face’s muscles and the dead expressionless eyes create an eerie vibe. The color scheme works so well for the tattoo that it almost seems three-dimensional. This zombie tattoo is bound to be the center of attraction wherever you go and would be a definite conversation starter. This zombie tattoo would look amazing on either your upper arm or on your thigh or lower leg. To view more such unique tattoo designs by the artist, click on the link above.

Clint Eastwood is one of the most iconic stars of Hollywood who starred in many movies and won many hearts in his time. The 91 years old actor is known for his famous dialogues in his films. Getting a tattoo of your favorite movie star could be a fantastic tribute, but what if you turn your favorite star into a zombie? This cool tattoo is from one of the most iconic movie posters with some modification in the making process. This tattoo design would look good on your shoulder, calf, and thigh. To view more zombie tattoo ideas like this, click on the link mentioned above.

This adorable tattoo is a fantastic choice for people who want a zombie tattoo that looks spooky but doesn’t want anything too big or scary. A zombie hand tattoo would convey the same meaning without being over the top. The fine details of the nails and the green shading make it look natural. To view more fantastic zombie tattoos like this, click on the link above.

What does a zombie tattoo mean?

A zombie tattoo is a popular, macabre design that often suggests an imminent resurrection of the dead, or a person’s ability to survive whatever life throws their way. It can also signify a transformation from a living state to something more powerful and enduring. The image of a zombie combined with other symbols can convey different meanings depending on the wearer’s personal interpretation. Zombie tattoos can be a bold statement of one’s strength and determination, or a reminder to stay vigilant against life’s many challenges. Either way, it is sure to make an impact!

What are some popular zombie tattoo designs?

Zombie tattoos come in many forms, and can range from cute to creepy. Popular designs include zombies wearing gas masks, zombie skulls, zombie hands, and other twisted or gruesome imagery. Crosses often feature prominently in zombie tattoos as a sign of hope and resurrection. Other symbols such as stars, flames, or even cartoon characters may be added to the design to add a personal touch. Whatever your vision, you can create a zombie tattoo that expresses your unique personality!

What are some zombie tattoo myths?

There are several myths surrounding zombie tattoos. One of the most common is that they are only for people who are obsessed with horror films, or those who want to embrace a darker side of life. However, this simply isn’t true! Many people choose to get zombie tattoos for symbolic reasons, and others just appreciate the unique aesthetic.