101 Best Traditional Mermaid Tattoo Ideas You Have To See To Believe! 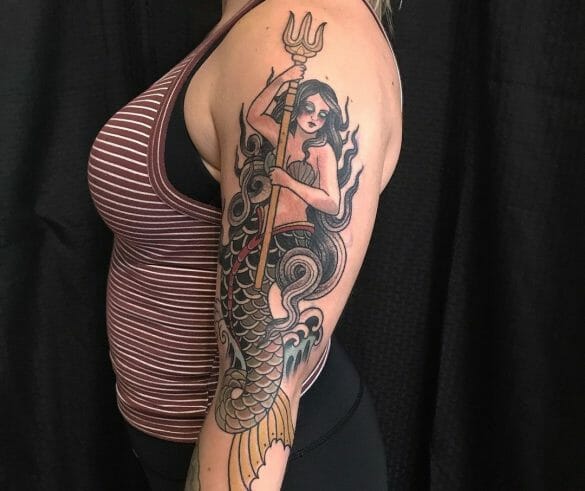 Mermaid is a strong female character that is associated with freedom, independence, and self-reliance.

Often, in stories, you will find a beautiful mermaid luring out innocent sailors of the oceans.

Mermaids have a solid connection to the element of water in general. They have been featured in many folktales around the world. Mermaids have the upper body of a human being and the tail of a fish is something unique to these majestical creatures. Mermaids can never be contained, and they are constantly moving, hence representing their characteristics of freedom and independence. Cute little mermaids are also seen as a symbol of awareness and insight, unlike other water creatures. In stories, they are known to control the weather, see the events of the future, and even grant wishes. No wonder why everyone in today’s world of tattoos is rushing to get themselves inked with a beautiful mermaid tattoo!

The mermaid silhouette is versatile, and the right tattoo artist would be able to take it to its full potential of beauty. Check out these best mermaid tattoos and find a cute traditional mermaid tattoo design to ink yourself with.

The Beauty Of The Mermaid Tattoo

These types of little mermaid tattoos look incredible when done correctly. Here, the tattoo artist has inked a little mermaid with an astonishing number of details. There are flowers around the mermaid, and the little mermaid’s tail has been inked with beautiful and unique patterns. A little mermaid is seen as a sign of youth and love. Whether they are playing tricks on ocean sailors or hiding in coves, they are always seen to be enjoying themselves. The flowers in these mermaid tattoo designs represent love and connection. The traditional mermaid tattoo meaning changes from folklore to folklore. They mean different things in every story. You can get this tiny mermaid tattoo on your arm, leg, wrist, and chest, and its size allows it to be tattooed basically on any body part.

The cute little short-haired mermaid here is seen to be wearing a hat and holding a rope inked in black and white. The tattoo artist has done a great job with this mermaid tattoo. While the lower half of the mermaid tattoo is inked in olive green, the rest of the design is in greyscale.

Mermaids represent a sign of good luck in many cultures around the world. A pirate ship or any other kind of ship is often seen with a mermaid’s head at the front of the sailing boat. If you are looking to get your twist on these mermaid tattoo designs, you can mix them with other kinds of mermaid tattoos that feature other sea creatures to make a complete mermaid tattoo.

This is a themed tattoo design, and mermaid tattoos with this type of design look nice. In this tattoo design, an evil mermaid is watching the sunset. Often siren mermaids are represented in folklore as mermaids who lure sailors to murder them. Siren mermaids or evil mermaids are creatures of the sea known to eat humans. They only take lives, and unlike a real mermaid, they do not stand for anything positive. In this mermaid tattoo design, a rope can be seen above the mermaid’s head as well. The little birds in the sky are a nice touch to this sunset mermaid tattoo. If you want a siren tattoo like this one, you can get it inked on your arm, leg, chest, or back.

What is a traditional mermaid tattoo?

A traditional mermaid tattoo typically features a beautiful woman with a fish tail, often depicted in colors like blue and green. They may also be adorned with objects such as shells, pearls or stars to represent the ocean and marine life. Traditional mermaid tattoos can symbolize many different things including femininity, free-spiritedness, fertility, and mysteriousness. The mermaid is often seen as a protector of sailors, who could use her power to guide them safely back home. Mermaid tattoos are also popular among those who love the ocean and sea life, as well as those who identify with a more whimsical side. Whatever you choose to represent, traditional mermaid tattoos are beautiful works of art that can be customized to fit your individual style.

What is the history of traditional mermaid tattoos?

The traditional mermaid tattoo has a long and varied history. Mermaids have been depicted in art, literature, and folklore since ancient times. For centuries, sailors believed that the sight of a mermaid was an omen of good luck and safe passage. The iconic image of a beautiful woman with a fish tail has become an icon throughout various cultures, often inspiring awe and admiration. Traditional mermaid tattoos have been used to represent many different things including femininity, free-spiritedness, fertility, and mysteriousness. Today, these beautiful tattoos continue to remain popular among people around the world.