101 Best American Traditional Pin Up Tattoo Ideas That Will Blow Your Mind! 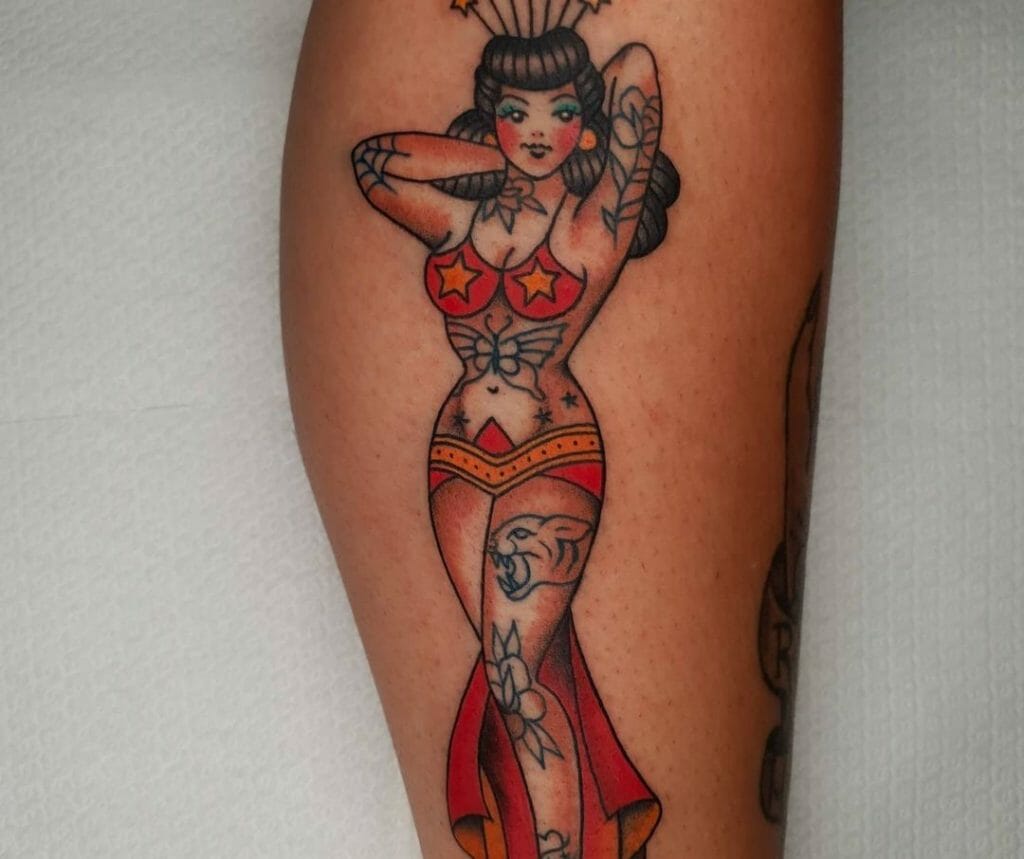 Are you looking for some iconic imagery to put in your traditional tattoo? Then here are some amazing American Traditional Pin Up Tattoo ideas!

The term ‘pin up girl’ originated from the pictures of various models which were pinned up on walls for display by men.

The concept of a pin up girl has a rich history as it gained popularity during the 1940s while the Second World War was on. Charles Gibson was credited with coming up with the first drawing of a pin up girl that became very famous.

With the advent of the camera, models started to pose as a pin up girl. These pictures taken of beautiful women were then produced in large numbers for sale and distribution by a mostly male consumer base. The old school style pin up girl pictures are now considered an important part of American pop culture because of its huge impact on the American traditional style of visual media and femininity.

The notion of ‘Gibson girl’ also arose which dictated what the most beautiful woman should look like in those contemporary times. A true pin up girl had to have curly hair and exude feminine beauty as well as sex appeal. While the pin up girls have often been criticised for blatant sexualisation and objectification of women, many people also argue that these pictures are merely an appreciation of the female form in traditional style. Betty Grable was the primary and most famous pin up girl during the Second World War.

People around the world are aware of the classic pin up girl imagery. The pin up girls would be posing in alluring styles to sell more pictures. The woman in the picture could be wearing military clothes to inspire and motivate army soldiers or even dress like a chef in the kitchen. Consequently, if you are looking for a pin up girl tattoo, you should check out the traditional American pin up girl tattoo designs. These tattoos are also easy to place anywhere on your body including arm, legs, chest or back.

Here are some amazing pin up girl tattoo designs for you to check out if you are in need of some inspiration!

If you are a tattoo lover who is looking to get a tattoo made in the American traditional style specifically, then you should look at various pin up tattoos. The pin up tattoos are actually a great way to exhibit the traditional method of tattooing. As can be seen in the picture, the figure of the dancing girl looks amazing even from a distance because of the artistic style that has been followed in drawing it.

Pin Up Tattoo Design With The Face Of The Model

While most pin up girl tattoos focus on the entire body of the pin up girls, you can also take a more unconventional path and choose a pin up girl tattoo with only the face of the model. The 1940s was a truly wonderful time with many new types of makeup and beauty trends arising. During this time, most women loved to wear subtle eyeliners while celebrities and actresses would even flick their eyeliners up to create a winged eyeliner. In addition to that, they would add a classic red lipstick that looked sensual and elegant at the same time. This tattoo would be perfect for someone who appreciates the pin up girls and contemporary beauty trends.

Whether you are getting a tattoo of pin up girls or ghosts, it is completely up to you to decide the tone and mood of the tattoo. If you are someone who loves to have fun and joke, your tattoos should definitely reflect that playful part of your personality. Consequently, if you are on the search for a perfect pin up tattoo which will also be funny, you can definitely follow the example in the picture above. Here, the wearer has gotten a hilarious pin up girl tattoo where the pin up girl happens to be a ghost! A pin up girl tattoo like this would be awesome for Halloween and will definitely elicit a few laughs through out the year.

Halloween has always been an amazing occasion that stirs up creativity in everyone. If you are looking for some more inspiration about awesome Halloween tattoo ideas for girls, check out this article with some amazing Halloween tattoo designs.

Many women including burlesque dancers have put forward the opinion that pin ups were a wonderful way of portraying feminine sexuality and female empowerment. Women like Betty Grable and Bettie Page became extremely popular as pin up models.

If you want to get pin up tattoos but do not want monochromatic, black coloured designs, you can also ask your tattoo artist to add some vibrant colours to your pin up tattoo. After all, any tattoo can be made more beautiful if you fill it in with colours. Like the wearer has done in the picture above, you can also include additional elements from contemporary culture into your pin up girl tattoo ideas.

Military men were one of the primary customers of pin up pictures during the World War. These men were mostly away from home and this was the only way they could keep up with what was happening in American movies and Hollywood at that point of time. Many of these models were also their famous actresses who were known for their beauty through out the world. The men also carried pin up of these actresses as it had a special meaning for them.

Nowadays, many women also get cute pin up tattoos if it suits their sense of fashion and aesthetics. Consequently, if you are a sports lover, regardless of your gender, you can ask your tattoo artist to create pin up tattoos related to sports.

Quirky Pin Up Tattoo Design For Men And Women

The pin up images are now considered as art because they reflect the era of history in which they were produced. You can pick a conventional pin up tattoo design if you want or you can also choose a quirky and fun design based on your own preferences. As can be seen in the picture, the wearer has changed the pose of the pin up girl and added a glass of martini! The bright red colour palette of the pin up tattoo will look undoubtedly amazing even from a distance.

There are plenty of pin up girl tattoo designs that can be tattooed on both men and women. Consequently, if you feel adventurous and want to play around with the classic images of pin up girls drawn in the American traditional styles of tattooing, then you can also draw some inspiration from the picture above.

Out of the many pretty faces in America during the 1950s and onwards, Marilyn Monroe will forever be famous for her feminine beauty and body. The images and outfit styles of Marilyn Monroe have become famous forever due to her classic clothing and stunning physical features. Consequently, she is also the model of many pin up tattoo designs. If you are looking for an American traditional pin up girl tattoo with a woman who personifies the pin up beauty ideal and the golden era of Hollywood, you should look for a lovely Marilyn Monroe pin up tattoo.

If you are someone who is tired of the same old boring American traditional style of tattoos, then you might just want to try out the neo-American traditional pin up tattoo arm. As can be seen in the picture above, the wearer has gotten a pin up girl tattoo on their arm and has filled it in with bright colours. In addition to that, the pin up tattoo is not the same as the other pin up girl tattoos that are drawn in the usual style. Here, the pin up girl has been turned into a beautiful mermaid showing the creativity of the tattoo artist.

While most people get tattoos that are meaningful to them and hold some personal significance in their lives, tattoos are also supposed to be fun and express the playful parts of ourselves. Therefore, a lot of people do not care if their tattoo designs are bizarre or strange. If you are one such tattoo aficionado who does not care about others’ opinions, then you can definitely go ahead and choose from the most odd tattoo designs available on the internet and in a tattoo studio. Consequently, if you want to get a pin up girl tattoo, go ahead and choose the design that speaks to you the most!

What is an American traditional pin up tattoo?

An American traditional pin up tattoo is a classic style of body art that dates back to the early 1900s. This nostalgic style features colorful images of beautiful women, often in provocative poses. Pin up tattoos are usually done in bright colors and simple lines, creating an eye-catching design that will stand the test of time. The classic imagery featured in pin up tattoos often has a strong connection to patriotism and nostalgia, making them a popular choice for those who want to express their love of country. Pin up tattoos usually feature flourishes of stars, hearts, banners and eagles in traditional Americana colors, such as red, white and blue. These iconic designs are sure to be admired for years to come.

What are the origins of American traditional pin up tattoos?

The origins of American traditional pin up tattoos can be traced back to the early 1900’s, when artists such as Norman Rockwell and Gil Elvgren began creating iconic imagery of beautiful women. These images became popular when they were printed on postcards, newspapers and magazines, eventually leading to their use in body art. The style is often referred to as “American traditional” because of its roots in American culture and style. Pin up tattoos can be seen as a way to express patriotism and nostalgia, making them a popular choice for those who want to show their love for the United States.