101 Best Witch Tattoo Ideas You Have To See To Believe! 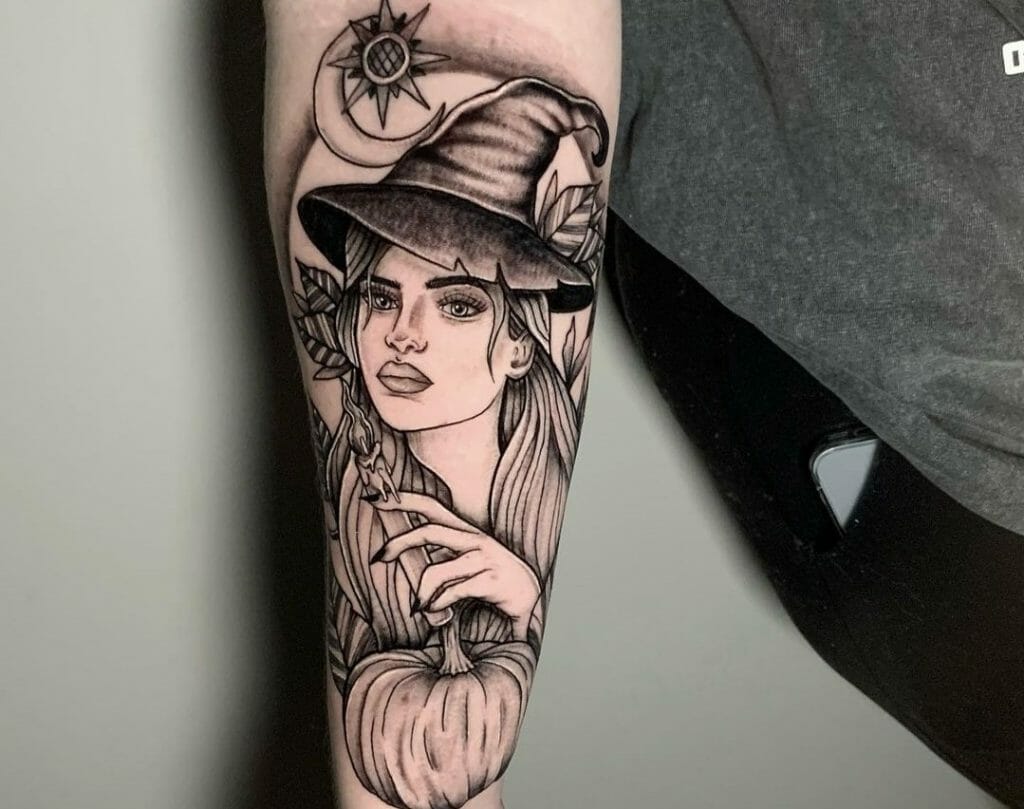 Do you find witches interesting, or do witch tattoos fascinate you? Check out some magical witch tattoo designs here!

Witches often use tarot cards, broomstick, crystals, and cauldrons in the fire to cast a spell. All of this adds to the dark magic performed by witches. But what does a witch tattoo mean?

A witch tattoo symbolizes wisdom. Although there are negative meanings like the dark side of evil, witch tattoos can have positive meanings like knowledge, wisdom, and a desire to gain more knowledge and wisdom. There are many magical symbols to represent the witches, like the upside-down triangle. The triangle represents water, one of the four elements of earth. You can convey dark magic and other meanings of a witch tattoo with an element like a broomstick, the moon, fire added to your tattoo. Let us look at some captivating witch tattoo designs to inspire your own!

This witch tattoo combines different elements of the magical world and all things witchy. Here we see both hands of a witch in the process of capturing energy and casting a spell. In between the witch’s hands, there are celestial objects overlapping one other. Instead of a full moon, there is a crescent-shaped moon with the sun behind it. The witches hands are adorned with jewellery and fingers have long sharp nails. Even the witches hands look as if they are dripping with magic. The tattoo artist uses fine black lines and dot shading to depict the moon and the sun. If you want to carry the magic of witches in a simple, celestial tattoo, you can consider this lovely design. This tattoo is placed on the forearm.

Witch tattoos are not always about a witch-burning with fury and casting dark spells. Sometimes you can create witchy tattoos with natural elements or magical ones. This tattoo is inked behind the ankles on both feet. In the older days, witches were not always favoured. They were considered to be evil because of the dark witchcraft they performed. Witches were burned in fire tied to stakes during this time. In modern times, witches are celebrated through tattoos like this. The nails and the fading fire behind the pins might symbolize a witch-burning. Overall, this tattoo can be categorized as an indirect burning witch tattoo.

Remember how witches usually have a black cat accompanying them? Well, that could be the inspiration for this cat tattoo. The pumpkin that the cat is sitting on gives this witchy tattoo Halloween vibes. The cat in this witchy tattoo is black, which is not surprising. Black cats have been part of witch tattoo ideas for a long time, just like ravens. The cat has blue, green eyes shining to give an evil effect. The cat witch hat also has a purple witch hat tattoo atop its head with is a crescent moon. The different phases of the moon symbolize different meanings, like the waning moon behind the cat symbolizes cleansing or releasing meaning.

Are you looking to add a bit of a gothic vibe to your witchy tattoos? Then try this bold design. This chest piece has gothic architecture decorating the witchy tattoos along with it. The tattoo starts below the neck and below all over the chest. Thistles and brambles are used along with the gothic architecture in this tattoo. Other witchy elements like the crescent moon, fine lines and dot work shading add to this dark magical beauty! If you are looking for a daring tattoo that reflects your witchy ways, this chest piece design might appeal to your taste. Who wouldn’t want to show off a grand gothic witch tattoo?

Portrait Of A Witch Tattoo

Here is an elegant witch tattoo featuring a beautiful witch. The woman in the tattoo is not the usual scary looking witch out for revenge. This witch depicts a royal beauty wearing huge, gold jewellery around her neck. The witch has her head draped in a green cloth with two red flowers around it. The witch’s black hair is flowing along both sides of her face in which, black waves. The floral twist in these witch tattoos gives the magic of its own. The witches eyes match the gold in her jewellery while the rest of her facial features are inked only in black and white. This is far from the conventional depictions of a witch and would look lovely as a tattoo.

Another witch tattoo with Halloween vibes. This time, there is a portrait of a witch lady along with the pumpkin. This tattoo has many elements of witches in it, like the bat flying behind the witch. Witches are known take the form of a bat while flying in the night. The pumpkin is commonly associated with Halloween and it symbolizes rebirth and fertility. The drawing of the witch is done mainly grey and white ink, while the huge, orange pumpkin stands out. It matches the belt on witch’s grey hat. Here the witch has thick black hair and bold eyes. If you are a fan of the festival of Halloween and want to mix that in your witch tattoo, this pumpkin witch will provide some inspiration for you.

Triple goddesses are a common design for witch tattoos. The triple goddess tattoos are symbolic to the different stages of life. It signifies the endless cycle of birth and death in life. The entire tattoo looks lovely in fine lines and dot work for shading.

The three women in this tattoo represent the three phases of womanhood, the maiden, mother, and crone. Below each woman is a the moon in different stages. The woman in the center who represents the mother stage of the life of womanhood has a crescent symbol on her forehead and leaf crown on her head. If you are a fan of triple goddesses, this type of tattoo design is worth checking out.

Here is another triple goddess tattoo design for you. Much like the previous one, we see the triple goddess symbol in this tattoo. However, here the crescent and full moon is placed on top of the triple goddesses in bright orange. The witches have thick, curly hair and beautiful red lips. Below it, we see just one of the witch wearing an orange and yellow armour suit. It appears that the triple goddesses are part of the same woman. It represents the idea that each soul passes through different stages in life, like the moon. This circle of life applies to all beings living on earth. Instead of a goddess tattoo, you can also get a Blair witch tattoo or the witch king of Angmar tattoo.

If you are looking to get an adorable, yet haunting witch tattoo, try this one! This cat tattoo is filled dark shading throughout, but the cat’s hollow, white eyes stand apart and look scary. The cat is seen wearing a witch hat with a crescent moon in the middle of the hat. The cat’s fur and whiskers are shown in thick, black strokes.

Black cats are symbols of witchcraft. Just like witches, black cats have been associated with dark magic. Since witches were more connected with nature, they had cats as pets. Apart from the cat, the raven, owl, and snake are often associated with witches. The cat conveys the magic of witchcraft in this tattoo, or maybe the cat is a witch in disguise! Around the tattoo are little sparkly designs, adding to the magical aura.

Spooky ghosts have been part of Halloween since time immemorial. And adding a bit of witchcraft and dark magic would make for a striking witch tattoo. You can add other meaningful tattoo symbols related to witches, like crystals, a broomstick, or a snake. If you want to wear a Halloween tattoo on your arms, this spooky ghost might seem perfect.

Here are some more suggestions related to magic and witch tattoos

What does a witch tattoo mean?

A witch tattoo can have a variety of different meanings, depending on how it is designed and who is wearing it. For some people, a witch tattoo may represent their interest in the occult or paganism. For others, it may be a symbol of Halloween or simply a way to show their love of all things spooky. Whatever the meaning, witch tattoos are always sure to turn heads.

What are some popular witch tattoo designs?

There are a wide variety of witch tattoo designs to choose from. Some popular choices include traditional witches, broomstick-riding witches, and cauldron-stirring witches. Other designs may feature black cats, bats, or other Halloween-themed elements. No matter what design you choose, your witch tattoo is sure to be one of a kind.

How much will my witch tattoo cost?

The price of a witch tattoo will vary depending on the size, complexity, and location of the design. Generally speaking, smaller tattoos will cost less than larger ones. Simple designs may also be less expensive than more detailed ones. The best way to get an accurate estimate is to consult with a tattoo artist.