101 Best Snake Arm Tattoo Ideas You Have To See To Believe! 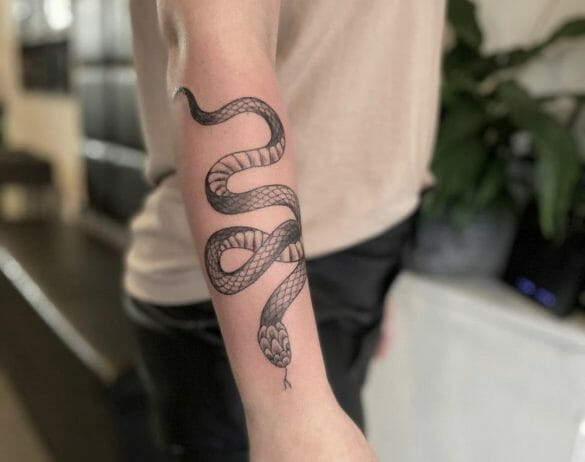 Snakes have been a part of this world since time immemorial and have evolved from aquatic or semi-aquatic lizards.

Snakes can live in water, as well as land. There are almost 3,900 species of snakes existing today around the world!

Snakes have been a symbol of many religious and cultural practices since ancient times. In Roman mythology, Glycon is considered to be the god of snakes. Even today, the symbol which depicts Caduceus, a snake wrapped around the Rod of Asclepius, is used to symbolize medicine worldwide. In India, the snake is worshipped and fed milk as they are considered a symbol of fertility. Contrarily, in Christianity, a snake represents evil and deception. In modern slang, a person is referred to as a snake if considered untrustworthy or backstabbing.

It is not true that all snakes are poisonous. There are only a few species of snakes that spit venom to kill their prey, whereas non-venomous snakes kill their prey by strangulation and constriction.

The image represents an arm blackwork tattoo depicting a snake with its tongue out. The tattoo has some floral illustrations, which are probably peonies. Due to its beautiful artistry, the tattoo seems to bring to life the moment where the snake waits in the bushes and flowers to catch its prey and strike when the time is right. The delicate lines of the scales and the underside or belly of the snake give an illusion of multi-dimension. While snakes are feared by many, the artist has beautifully combined the snake with a floral motif, thereby softening the deadly image of a snake.

This is a classic example of a snake wrapped around arm tattoo. The snake tattoo arm wrap shows the body of the coiled snake around the wrist in black ink. The head of the snake extends to the back of the hand past the thumb, its tongue reaching ahead of the index finger’s knuckle. A human skull tattoo is inked on the base of the index finger before the end of the snake tongue. Such a snake tattoo wrapped around arm represents power since snakes wrap themselves around their prey, asserting their dominance.

This eye-catching tattoo dramatically looks like a real snake. The tattoo artist has brilliantly illustrated a small snake with excellent ink work and perfectly thick lines. The detailed shading of the scales on this snake tattoo gives it a life-like feeling as if the snake might start slithering any moment. This tattoo has been inked on the inside of the upper arm, but it could also look great as a snake thigh tattoo. The tattoo displays the artistry of the tattoo artist brilliantly, with the twisting body of the snake showcasing its movement and highlighting every scale on its body.

This bold and quirky tattoo depicts a small snake arm tattoo with various colours. It’s a funky choice for a tattoo, as it’s quite rare to spot fully coloured tattoos. This snake tattoo shows a marvellous play of different bright colours, representing the diversity in snake species, just like us humans. The blend of colours is so beautiful that it makes you happy the moment you look at it. Though this tattoo might not have a profound snake tattoo meaning, it surely radiates positivity.

This tattoo is a type of Japanese traditional snake tattoo, which depicts the snake in a Japanese mythological illustration. The tattoo is an elaborate one, wrapping around the arm completely. Just above the angry-looking snake’s head, there are two mythical demonic-looking faces that add to the eeriness of this image. The scales of the snake are painted in black and red to intensify the authenticity of the Japanese artistry. If you’re a fan of Japanese art and imagery, this is probably one of the best tattoo designs for you.

This is a simple snake tattoo depicting a serpent or a snake wrapping around an arm tattoo. It is done in black ink, depicting a long snake that wraps itself around the upper half of the arm and around the elbow. While the tattoo is pretty neat, the snake’s skin is pretty detailed. If you aren’t looking for a bold tattoo, but want a traditional snake tattoo without too many eye-popping details, this is the best choice for you. Snake wrapping around arm tattoo designs like this could also look great wrapped around a leg or a thigh instead of an arm.

This arm tattoo looks like it was taken straight out of a fantasy fiction novel. It is undoubtedly one of the best snake tattoo ideas for people who love detailed snake tattoo artistry, as it depicts not just a snake but many other elements like flowers, clouds, sun, moon, wings, and a sword. This arm tattoo might have had a deep personal meaning for the wearer as it contains numerous details. So, if you’re looking for some mystical inspiration, your search might end here!

This small snake tattoo represents two shaking hands, where another hand is impersonated as a snake. This black and grey tattoo symbolizes human nature to break and betray one’s trust. Essentially, it warns against the wicked nature of people, telling the onlooker to trust no one. The snake arm tattoo illustrates the hand snake biting the actual hand, i.e., breaking the other person’s trust. One of the interesting details is a small finger tattoo showing a knife passing through a small heart, symbolizing betrayal.

This snake arm tattoo depicts a snake tattoo on the arm, which coils itself inside a white skull. There is a crown placed on top of the skull. The skull is shaded brilliantly in light hues of yellow, whereas the crown and snake are in black and grey colours. The shading details beautifully capture the shiny scales of the snake, almost resembling a realistic snake. Even the skull and the crown pop out wonderfully. The artist has done a great job in capturing the crown’s metallic texture and the skull’s bony surface.

This is a unique snake tattoo design showing a snake-like creature from Asian mythology – the dragon. Unlike snakes, dragons can fly in the air and breathe fire from their body, making them the ultimate representation of power. Not just that, dragons are considered pious in many different cultures. The dragon is inked in black, surrounded by pink and red sakura flowers and their petals. This is one of the best snake tattoo ideas for you if you appreciate Asian art and culture. It is an excellent example of tribal snake tattoos inspired by other cultures.

Apart from the ones that are mentioned in this article, here are some personal recommendations of snake tattoo ideas on body parts that we hope you will like:

What is an arm snake tattoo?

The arm snake tattoo is a type of tattoo that covers the entire length of the arm, from shoulder to wrist. It is typically a very detailed and intricate design, and can be done in a variety of different styles.

What are the benefits of an arm snake tattoo?

There are a few benefits to getting an arm snake tattoo. First, it can be a very visually stunning tattoo, and will definitely turn heads when you show it off. Additionally, it can be a great conversation starter – people will be curious about what the tattoo means, and you can use it as an opportunity to share your story.

How much does an arm snake tattoo cost?

The cost of an arm snake tattoo will vary depending on the size, complexity, and location of the tattoo. Generally speaking, you can expect to pay anywhere from $200 to $500 for this type of tattoo.

How do I choose a design for my arm snake tattoo?

There are a few things to consider when choosing a design for your arm snake tattoo. First, think about the overall look that you want to achieve. Do you want a detailed and intricate design, or something simpler? Additionally, consider the meaning behind the tattoo – what do you want it to represent? Once you have a good idea of what you want, you can start looking for specific designs that fit your criteria.

How do I take care of my arm snake tattoo?

As with any tattoo, it is important to take care of your arm snake tattoo properly in order to keep it looking its best. Be sure to clean the tattoo regularly, using a mild soap and water. Additionally, avoid excessive sun exposure, as this can cause the tattoo to fade over time. If you have any questions or concerns about caring for your tattoo, be sure to consult with your artist.

What are some of the most popular arm snake tattoo designs?

There are a few different arm snake tattoo designs that are popular among people who choose this type of tattoo. One popular design is the traditional Indian snake, which often includes intricate patterns and symbols. Additionally, many people choose to get an arm snake tattoo that represents their favorite sports team, or that has a personal meaning to them. Whatever design you choose, make sure that it is something that you will be happy with for years to come.

If you are considering getting an arm snake tattoo, be sure to do your research and choose a design that you will love. These tattoos can be very beautiful and unique, and are a great way to show off your personality. Be sure to take care of your tattoo, and it will remain looking great for years to come.