101 best Viking Fenrir Tattoo Ideas That Will Blow Your Mind! 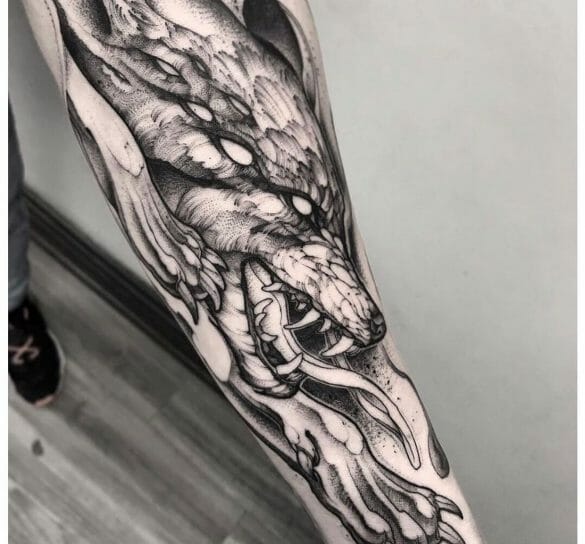 Wolf Fenrir is a powerful creature from Norse mythology making it a popular tattoo design. Check out some amazing Viking Fenrir Tattoo ideas just for you.

Fenrir, also known as Fenrisulfr, is a notorious wolf that comes from Norse mythology.

The wolf is one of the most majestic creatures that are popular in tales of mythology. That is also one of the reasons why it is a popular tattoo design choice for many people.

A fan of Norse mythology and Norse mythology scholars have many different wolf tattoo ideas to choose from. Other wolves from Norse mythology include Freki, Geki, Skoll, and Hati, the wolves who are fated to go after the moon and sun till the end of time. However, by far, Wolf Fenrir is the most popular tattoo design amongst other wolves. Fenrir was a wolf that even gods feared. He is the child of God Loki and Angroboda (a giantess). According to Norse myth, Fenrir would be the reason behind the death of Chief God Odin during Ragnarok, the end of the world. Fenrir is featured in several books by famous authors like C.S Lewis, J.K Rowling, and JRR Tolkein.

A Fenrir tattoo is a design that includes the monstrous wolf along with distinctive features. The Norse wolf has a humungous fan base which has led many people to get it tattooed on themselves. The Fenrir signifies savagery which is out of control even for the Gods. Fenrir is synonymous with ferociousness. A Viking tattoo symbolizes strength, power, and devotion to the Gods. When a Viking tattoo is combined with a Fenrir tattoo, it creates a magical tattoo with a deep meaning.

There are some amazing tattoo ideas revolving around Fenrir that will blow your minds.

A Fenrir tattoo can be made in several different themes. The most common theme is a Fenrir Viking Tattoo. The wolf Fenrir was the child of Loki and was considered a monster. Everyone feared him. Fenrir was born as a puppy and brought to Asgard after Odin refused to keep him with his other 2 dogs. Soon Fenrir grew larger than any dog, and into a beast. A Fenrir tattoo is considered to show the wild side of a person. It shows how courageous they are and that they don’t even fear God.

This particular tattoo shows an intricate design by the tattoo artist. The wolf’s head is very visible with a fierce expression, it has large pointy teeth and bright eyes. It looks like it is snarling at somebody. Below the wolf, is a Viking compass which is a symbol of guidance and protection. This compass also known as a Vegvisir can literally be translated as a path guide. This symbol was derived from Norse mythology. This beautiful combination of a tattoo will look amazing on any part of the body. In the above image, it has been made on the arm, but it can be designed on the chest, back, and legs.

This is one of the most interesting Fenrir Tattoo designs that include the wolf and the compass. Stories about Fenrir being a beast and a monster are not unheard of. There was not one creature from Norse mythology that could predict the actions of Fenrir. Once, without realizing how powerful the giant wolf was, God’s decided to bind Fenrir. They managed to try twice but Fenrir would break free every time but succeeded the third time after a lot of struggle. This is what the tattoo predicts, that one must try and be unpredictable in life and nobody will be able to stop you from achieving your goals.

The compass is one of the most popular Vikings symbols. The tattoo artist has made this design in an even more intricate manner. The mane on the giant wolf almost looks realistic. This Norse Wolf tattoo should be the one for you if you want to show your fierce yet motivated side.

This tattoo seems similar to the last one, however, the highlight of this tattoo is the Vikings compass. Over the years, we have learned that the Vikings reached their final destination with the help of their own methods, and their compass played a huge role in that. They believed that the compass helped them find the right path and guided them in the right direction.

The tattoo artist has made this tattoo with a lot of intricacies. Each strand of hair on the wolf looks realistic. The wolf’s mouth is open and the teeth look sharp. The eyes of the wolf are closed as if in extreme rage. The compass is also made in blank ink and the strokes are thick making the compass more prominent in the tattoo.

This tattoo was made by a very talented artist. The artist has made Skoll and Hati on two different arms, one is chasing the sun and the other is chasing the moon. Both wolves look ferocious and they are made with a geometric pattern, just like images from ancient times. This tattoo is stylish and trendy and a very good option for somebody who has a keen interest in mythology.

This Norse tattoo is unique in its own way. The wolf is very clearly visible, however, it is made with a unique pattern. There are some interconnected knots that are made with some thick black strokes. There is some shading done inside the strokes that gives it a rustic look. The filling in the middle is done with some black shading which gives a dotted pattern look. The face of the mythological creature is facing the right, its teeth are visibly sharp. It looks like it is snarling at something or somebody, fighting for itself.

This is one of the best animal tattoos with great symbolism that one could get. The arm, upper jaw, and legs are considered to be some popular locations on the body for this type of art.

This Norse tattoo appears to be on the darker side. This shows the skull of Fenrir surrounded by what appears to be a knotted rope, however, it is actually Skoll and Hati. A skull tattoo is generally associated with death or life after death and a wolf tattoo symbolizes guidance. A combination of the two generally means that a wolf will guide you into your afterlife and help you understand death.

This tattoo is a black and white tattoo made with thick and thin strokes. The skull looks realistic with gray shades on it. The eye socket is filled with black ink, to give it a darker vibe. The arrow in the middle does not have an exact meaning, however, it could mean guidance or sacrifice. It depends on what the person who got the tattoo interprets it as.

A wolf is a wild but fierce animal that has a natural instinct for survival. Fenrir the wolf is considered one of the most dreaded creatures according to Norse mythology. This design consists of a lone wolf and one of the most famous Viking symbols, the compass.

This tattoo is set on the arm of the person. The strokes on the hair of this wolf are intricate and in shades of black and grey. The snarling wolf is not an easy design, so it should be made with the help of some talented tattoo artist. This is one of the Viking tattoos that can be made anywhere on the body, the arm, thigh, leg, back, and even chest.

This tattoo is a similar yet unique tattoo. The wolf on the arm is made with some intricate strokes. The compass on the wolf is made with thick black strokes. There is a Viking pattern just beside the compass that gives a unique look to this design.

Some people like to get a tattoo of the lone wolf, or a paw or even a protective image of the wolf snarling. One of the popular places for this tattoo is the lower jaw or the neck. This form of art is different and creative and the meaning behind it is special.

God did not understand the kind of strength he had until they raised Fenrir themselves. The fact that the wolf is a pack animal was proven wrong when the lone wolf was ready to take down anything that came it’s way.

This design of the wolf is made from thick strokes of black ink. If you look carefully at the image, there is a sword going through his face that represents guidance. This tattoo represents the time Fenrir at the sun in a battle with Gods.

A Norse wolf tattoo is considered to be one of the best tattoos. Fenrir the wolf was considered to accept challenges and broke free every time. Any craftsman in the nine worlds could not stop him from breaking free. He was considered a common predator in the Nordic Countries and was the child of infamous trickster Loki.

A wolf tattoo is a common choice, but there are other designs like the runes and a Valknut tattoo (which consists of three interconnected triangles) This tattoo could be a great choice for your next tattoo.

What is the viking fenrir tattoo?

The Viking Fenrir tattoo is a popular Norse design that depicts the monstrous wolf of mythology. The ancient Vikings believed that Fenrir, along with his two brothers Jörmungandr (the World Serpent) and Hel (goddess of death), would eventually bring about Ragnarök – the end of all things. This tattoo symbolizes strength, courage, and sacrifice, as it honors the fierce wolf that will bring about the end of days. It also serves as a reminder to remain brave in the face of any challenge or adversity. The Viking Fenrir tattoo can be adapted to fit any size and style with both traditional Norse designs and modern takes on the image. Most popular placements for this tattoo are the arms, back, and chest. No matter where it’s placed, the Viking Fenrir tattoo is a powerful symbol of courage and strength.

What does the viking fenrir tattoo represent?

The Viking Fenrir tattoo represents strength, courage and sacrifice. It is a reminder of the fierce wolf that will bring about the end of days and to remain brave in the face of any challenge or adversity. It also serves as a symbol of the ancient Norse belief in Ragnarök – that ultimately, all things must come to an end. The Viking Fenrir tattoo is a reminder to live life to the fullest, make no regrets and stay strong in the face of any challenge. After all, every ending also marks a new beginning!

What are some of the best places to get a viking fenrir tattoo?

Some of the best places to get a Viking Fenrir tattoo are on the arms, back or chest. These areas have enough space for a larger design and offer an area that is easily visible when wearing short-sleeved clothing. It is also possible to get smaller designs on other parts of the body, such as the wrist or ankle.

How much does a viking fenrir tattoo cost?

The cost of a Viking Fenrir tattoo will depend on the size, complexity, and placement of the design. Generally speaking, small designs can start as low as $50 while larger and more detailed tattoos can cost several hundred dollars. It is best to consult with a professional tattoo artist to get an accurate estimate of the price. Additionally, they can help you customize the design to suit your individual style.