101 Best Raven Tattoo Ideas You Have To See To Believe! 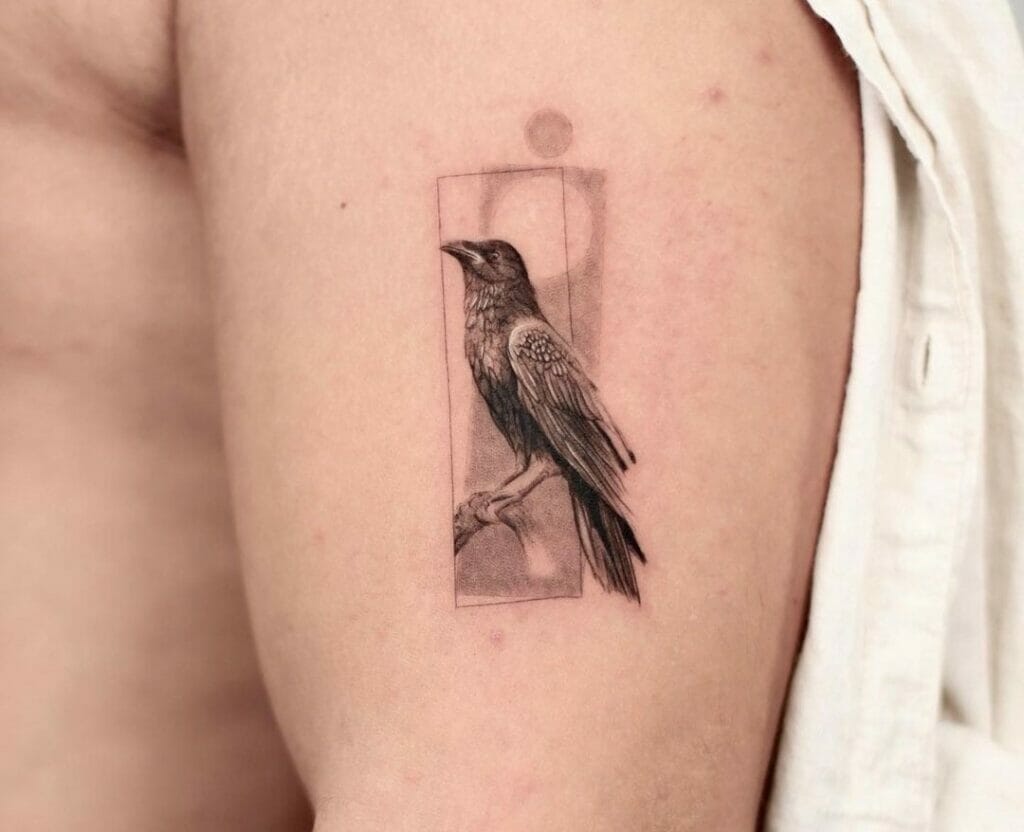 The Raven is a mystical creature – poetic, spiritual and even associated with witchcraft. Here are some raven tattoo ideas to please your inner poet.

Has Edgar Allan Poe’s ‘The Raven’ made you want a raven tattoo for yourself.

Ravens are generally known as witty, scary and spiritual birds. They resemble the unseen, mythical and symbolic meaning in life.

Ravens might seem like a bad omen in Western culture associated with witchcraft. However, it remains a cool tattoo to flaunt. What does a raven tattoo mean? Raven tattoos look very cool when inked with the correct form and if you can carry it that well. It almost acts like an accessory of wealth, charm and an instant attention catcher! Raven tribal tattoos are a must to get if it is your first bird tattoo because native Americans believed that they are the bearer of light and all things bright and beautiful. It can withstand the evil with its powers and will let not harm be caused to itself . There is no such difference between crows and ravens because , both are scavenger birds, lives on waste and are equally witty. The only thing that separates a crow and a raven is that ravens prefer their own company (like a typical introvert) and crows can match with any company they have. Ravens have also been a part of our culture, flying ravens in mythology are shown as the carrier of ill news like death , or some mishap. A raven’s symbolism to be interpreted into a tattoo would be to associate with the dark of night , dead , ill omens as well as wisdom and wit. A raven tattoo would be a dark character to get inked , and vary in meaning from person to person. An ideal raven tattoo can be a favourite among any goth lovers .

Given are few raven tattoo ideas , that you might like to get for that actual mysterious vibe:

This particular tattoo idea looks like a rise from the dead. The spooky tattoo design shall look remarkable on the bicep area of the arm. The intricate play with shadow and light in the drawing, with a black ink and white ink forms a very cool combination of the skull and the raven together. The calmness of the crow while sitting on the skull marks the absolute unpredictable move, like it doesn’t know what will it do the next moment. The dried teeth out of the skull, brings that eeriness, and spreads that fear when looked at a glance. Having freedom from the shackles of life, worrying , expecting and finally submitting to fate , might result in getting this tattoo. It makes you look cool , deadly, invincible , almost fierce and an unique design to ink !

Raven symbolism is often associated with omens and darkness – a bird that chilled spines in ancient times and still carry superstitious meanings , mostly connected with bad luck. To get that very bird as a tattoos brings light on your love for Gothic genre of literature. This piece of tattoo is custom made , that gives it a very rusty look. It looks like cobwebs building home amongst that skull and raven . Looks very gloomy – just as it is meant to be. The skull is not of a human but presumably something dead of a reptile . While the interpretation of this raven tattoo may vary from person, but clearly a great idea to ink this at the forearm area . This raven tattoo meaning is to accept death in whatsoever form it may come and to playing with fire fearlessly.

A cool idea for black tattoos on body these days is to go bold. You can opt for a double raven tattoo conjoining in the middle of your chest. This can be a great tattoo if you have a wide space on which the artist can work on. This tattoo is originated from the Celtic culture , where the Celts believed that ravens were associated with mortality and war. Getting this tattoo would mean that you are quite aware of Celtic art and really appreciate it. If you are a fan of Game of Thrones, even then the raven tattoo can have a symbolic meaning to it. A Celtic raven chest tattoo can create an aura of intimidation and can be quite ominous too.

Flowers With A Raven Tattoo

Ravens are considered so scary because of their scavenging tendencies. In early history , during the war and mainly in the time of plague it used to feed on the dead bodies and thus it is associated with death. However, along with ravens, flowers are also associated with death. If we think about it, flowers bring a more peaceful effect to the death of a loved one while ravens bring up a more gruesome example of it. Combining the image of a flower with that of a raven makes this tattoo a beauty – it brings about two different aspects of death. The outlines and lighter strokes give a more mystical element to the tattoo. To preserve the gothic element to the tattoo, it is best if the outline is created using black ink. If you want you can ask the tattoo artist to fill in the flowers with red colour, bringing a taste of vibrant colours to the grayscale tattoo.

In Greek mythology, ravens were considered lucky and powerful birds. Since they associate as scavenger birds , they collaborate with the sun as a symbol of perseverance for they withstand the darkness and still stay strong. Ravens are an inspiration and at the same time ominous. The tattoo artists over here puts the thought in the form of a tattoo design . The crimson orange color of the setting sun , and the raven bird sitting on the branch of the tree marks the visual of the bird and what it is widely known for. Get this tattoo if you rose from dark times and still stay strong , and inspire people. Raven tattoo designs is a powerful metaphor, disguised as an art.

Ravens are granted as spirit animals by many , because of its versatile nature and wisdom. The wings open are a sign of freedom, perception and fearlessness. These raven tattoo designs are generally taken as a shoulder tattoo or a chest tattoo , because of the area it covers to draw the whole art. These black birds with wings spread large mark something dark , meaningful and its balance with the spiritual and mystical powers. It adorns the body in a majestic yet scary way , that it looks like it is fluttering its wings to save itself , but the abstract nature of the tattoo makes it look disarrayed and magical. The disarrayed strokes of the ink across makes it look very carelessly done , but little details mould it into a powerful message of an eternal struggle.

Native Americans believed ravens to be a symbol of light and all things bright. It is believed that its power of resistance brings positivity to the native American culture. This bird can also be called a ‘raven god'(Odin) because of its connection with the Earth to perform religious gestures. Raven carrying powerful attributes like immortality, good luck, a premonition of ill fate and the ability to succumb to its enemies, makes the raven dynamic and commanding. Thus, in this tattoo, there is lightning which adds a Norse element to the raven.

The Raven Of Literature Tattoo

“Deep into that darkness peering, long I stood there wondering, fearing,…” – Edgar Allan Poe. A famous poem by Edgar Allan Poe, The Raven, presents a grim yet wise look of the raven. The raven is considered as a wise bird who can show direction to a wayward poet, suffering in grief. A very outstanding raven tattoo would be of the drawing of a black raven, filled in with shadow , and it is sitting in a mirror. Instead of the glass , the tattoo artist writes lines from Poe’s poem . If you love a specific quote from the poem, then you can place this with the tattoo and make it pop out. It will also showcase your love for the poem.

Raven meaning in most cultures put the same characteristics as that of a crow. The raven and crow both are witty , scavenger hunting birds with existing with an eerie aura across them. The raven tattoos are generally done in black ink to make it stand out. This particular tattoo design is filled in with detailing, as the raven looks more like a crow and the eyes are shining as if looking for its next prey. There are several claws and feathers in this that mark the holding onto the dark, so as to not lose its cover. The claws are to protect itself from any mishap or to make a kill if required. This can be a very chaotic version of raven tattoos, designed in a way to bring about a tumultuous relationship that one can have with this bird. Get this tattoo done on the front side of your hand and just show off the anarchy !

In Norse mythology, Odin was the King of Gods. Odin’s ravens named Hugin and Munin , used to fly all over and whisper information in his ear. Raven and its scavenger hunting was originated from Odin and thus he was known as the ‘raven god’. Odin’s raven symbolise memory and thoughts. In Anglo-Saxon culture , the three triangles are jointly associated with death and burial grounds , and something premonitious. This raven tattoo idea is so far speaks for itself without even waiting for it to be explained. The death stare from Odin’s eyes and the shadow work done with detailing and filling the areas looks very remarkable. The thunder engorging from behind the three triangles also known as Valknut , looks lethal and astounding. The ideal place to ink this raven tattoo would be on the arm , so as to jump out of anyone who sees it. If you are a fan of Norse mythology, or love the lore of Odin and Thor then, this can be a great tattoo to go for.