101 Best Viking Tree of Life Tattoo Ideas That Will Blow Your Mind! 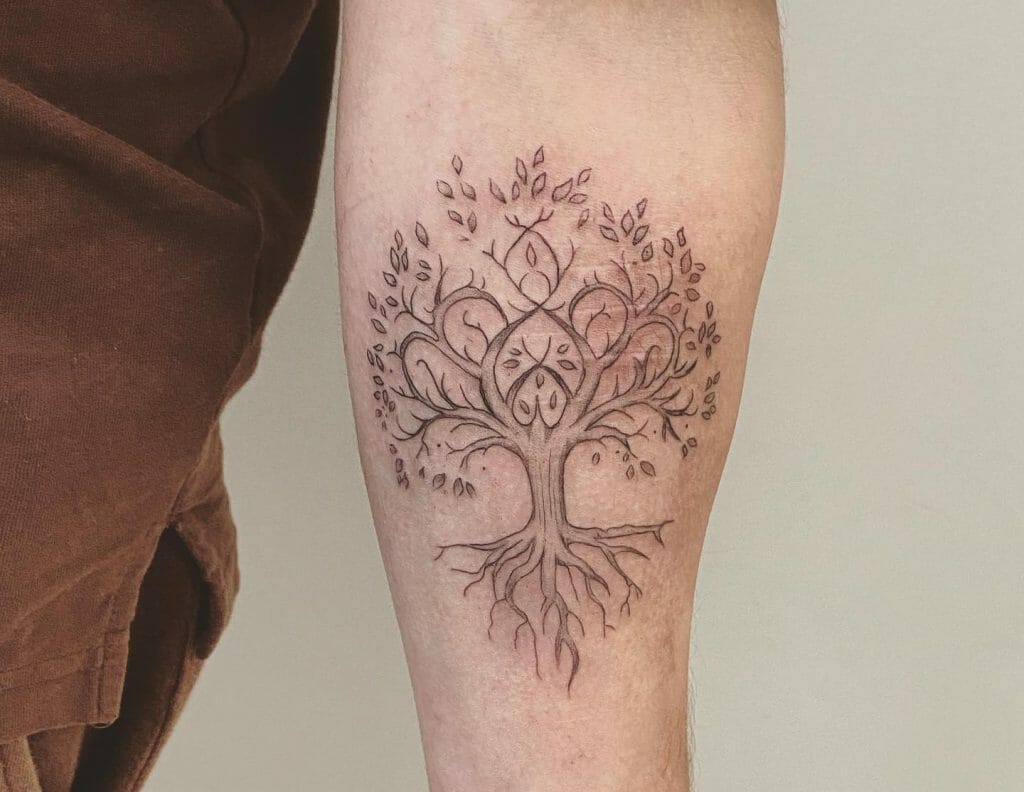 If you are bingeing on the Viking series and wish to get a cool tattoo design, the Viking tree of life tattoo or the Yggdrasil must be on your list.

Known by the name Varangians to the Eastern Romans, the Vikings were maritime people who from the 8th to 11th century pirated, traded, raided, and settled in different parts of Europe.

The Vikings originally belonged from Scandanavia, modern-day parts of Norway, Sweden, and Denmark, with commanding sailing and navigation expertise under their belt. They used longships for both travel and battle and established their settlement in parts like the British Isles, Ireland, Iceland, Greenland, Normandy, and the Volga trade routes.

The Vikings were believers in the old Norse religion and used to communicate in old Norse. The Norse religion was pagan in nature and in Norse mythology, Yggdrasil, or the tree of life holds a key position. According to the legends the tree of life is considered to be a magnificent evergreen ash tree with deep roots and several branches connecting the nine worlds or realms in Norse mythology.

The Yggdrasil Viking tattoos are becoming very popular in recent times not only for their deep-rooted symbolism but also for the extraordinary culture, tradition, and religious beliefs illustrated in Norse mythology.

The traditional or classical Yggdrasil tattoo design has quite a big foliage with a firm and old trunk. Done mostly in black ink the roots are intertwined with each other reaching downwards to the underworld whereas the tree’s branches point upwards supporting the heaven.

The eternal evergreen tree is the centre of the cosmos connecting the collection of nine worlds and represents the cycle of life, death, and rebirth. It is equally popular among men as well as women and can be done on the hands, calves, and back. The Yggdrasil tattoo comes in different sizes and represents unsurpassed power, profound wisdom, and mystical deity and are also called life tattoos.

Be it minimal living or minimal art, the idea of Minimalism philosophy where less is more has become extremely popular since the end of the World Wars. Minimalism rest on the concept of simple designs and minimal use of ink and space.

The quirky and distinct tattoo is so small that sometimes it is even not noticed by people. Mostly done in black ink the minimalist Yggdrasil tattoo can be done on the wrist, ankle, shoulders, chest and any place one likes to. They are both preferred by men and women and hold the meaning of strength, forgiveness, protection, and salvation.

With Marvel Cinematic Universe gaining popularity all over the world everyone has the idea that Mjolnir is the hammer of the Thunder God Thor. The hammer was forged by the dwarfs and can only be drawn by Thor due to Odin’s magic-worthy spell in it.

The Mjolnir and Yggdrasil tattoo is mostly ornated with black ink and is loved by men. It is usually done by taking a chunk of space, so it is advisable to do it on the arms, calves, and back. The Mjolnir never failed Thor and with it, he always protected the nine worlds. Here the tree of life is the symbol of eternity and when Mjolnir is fused with it this becomes eternal power and eternal protection.

The Nordic meaning of the term Vegvisir is literally ‘road sign’ or ‘signpost’ and looks like a compass. The Vikings commonly used this symbol in their flags, weapons, or sails. They believed in the concept that using this pathfinder would help them to reach their desired destination both in this life and after they are dead.

Mostly done in black ink and highlighted with white, the position of the Vegvisir can be inside the tree trunk or inside the tree foliage, or even inside the roots. The suitable places where the tattoo will blossom beautifully are the arms, chest, or calves. The Vegvisir and Yggdrasil tattoo symbolize that they would not only help someone to follow the right path in life but will also save them from taking wrong decisions. This tattoo is preferred by both sexes and is mostly done by people who are spiritual in nature.

In Nordic lore ‘He Who Eats His Own Tail’ is represented by Ouroboros where the meanings of ‘Oura’ and ‘Robos’ are ‘tail’ and ‘eating’ respectively. In Norse mythology, Jormungandr the child of Loki is the one who is referred to as Ouroboros. Also known as the Midgard Serpent it coiled around the earth and is one of the arch-rivals of Thor.

Primarily done in black ink the Ouroboros and Tree of Life tattoo is quite a unique creation. A snake eating its own tail and inside it is the world tree with its branches and roots spread out is symbolic of the eternal cycle of life. The two symbols collaborate with each other to show the origin and destruction of life itself in the universe, from which no one is free. This Viking tattoo tree of life design is done by people who appreciate both the positive and negative aspects of life and strongly believe in the elements of reincarnation.

The three interlocked triangles that are present in the Valknut always were seen around Odin. This is how it also came to be called Odin’s Knot. According to some Norse lore, this symbol also indicates the welcoming of Odin to other Gods and Warriors in the Hall of the Brave Warriors in Asgard.

Covered and ornated with black ink the Valknut symbol in the tattoo is either put on the top of the tree branches or under the tree roots and even sometimes in the middle of the tree trunk. When combined with Yggdrasil or the Great Tree it symbolizes the transition between life and death. It can be done in different sizes and is chosen by people who had gone through ebb and flow in life and believes with the aid of Odin they will also be able to embrace whatever is stored for them in the future.

Yggdrasil Along With a Pair of Bird Tattoo

The birds present in this tattoo are a pair of Raven whose names are Huginn and Muninn. They were always found perching on the shoulder of Odin. The birds symbolize thought and memory respectively and flew free all over the universe to bring information to Odin.

Commonly done in black ink the ravens are found perching on the branches of the Tree of Life creating the symbols of wisdom and intelligence all through eternity. Both men and women can get this tattoo on the sidearm, thigs, calves, chest, and back. Now this tattoo is also an example that represents both good and evil and depends on who owns it.

Hawk on The Yggdrasil Tattoo

In Norse mythology, the name of the hawk was Vedrfolnir who used to sit between the eyes of an unnamed eagle. The bird lived on the top branch of the tree of life and observed everything in universe.

Ornated with black ink, this hawk on the Yggdrasil tattoo can be done on areas like the back, hand, and chest. The ideas and symbols of vision, power, and leadership are very much reflected in this tattoo design and are preferred by people who either tend to have or attend to such qualities.

The runes were the alphabet system used by the Vikings. The usage of runes was not for daily communication but for calling the deities for help. They also played an important role in the occult and spirituality of the Norse tribes.

The runes are mostly inked around or below the roots of the tree of life and their meanings have changed nowadays. Now Runes on Yggdrasil tattoos are done by people who are proud of their Nordic ancestors. The cool tattoo can be either done by a male or female and has quite an impressive and sleek design to it.

In Norse Mythology a wolf was referred to as Fenrir and was the symbol of voracity and savagery. Often we have even seen the Vikings wearing wolfskin to show not only their savage nature but also the power of the tribe.

When the wolf is combined with Yggdrasil the tattoo becomes the symbol of eternal strength, power, and ferociousness. Mostly done in black ink the wolf or wolves are found near the roots of the tree of life and can be done in the back, arms, and the calves.

The World tree is also mentioned in the Poetic Edda and according to the legends, this is the tree in which Odin hanged himself for the wisdom of the runes. To gain more ideas one must study other elements like the symbols and animals associated with the tree of life.

Other cool Viking Tattoos that can be done by keeping the central idea of the Yggdrasil are as follows:

What is the meaning of a Viking tree of life tattoo?

The Viking tree of life tattoo is a symbol that celebrates the interconnectedness between all living things. It has its roots in Norse mythology, where the World Tree, Yggdrasil, connects the nine worlds together and serves as a pathway for godly knowledge. The tree is often depicted as having branches made of intertwined knots or leaves and roots that reach deep into the earth. It has come to symbolize protection, strength, and growth in life. The Viking tree of life tattoo is a reminder to strive for balance and harmony in the world around us. It can also be a sign of appreciation for the beauty and complexity of nature, as well as a celebration of our own personal journey of self-discovery. Ultimately, the Viking tree of life is a deeply meaningful tattoo that encourages us to embrace our connection with the natural world.