101 Best Fenrir Wolf Tattoo Ideas That Will Blow Your Mind! 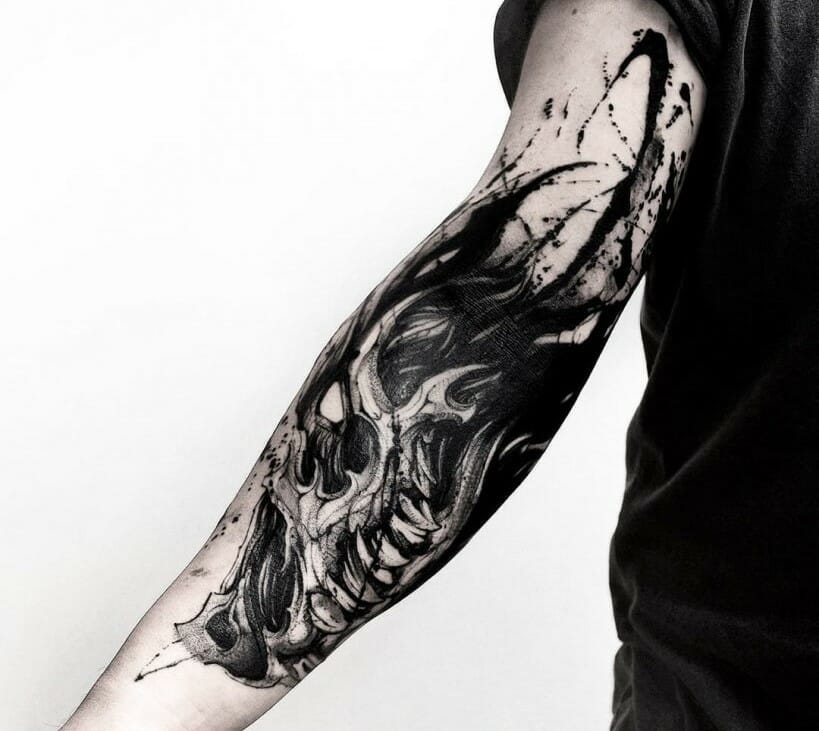 One of the most dreaded creatures is symbolic of strength and courage, so why not tattoo it! Fenrir Wolf tattoo can be your next tattoo to symbolize bravery.

Fenrir, a revered and feared character from the Norse myth, is one of the most widely opted-for characters among tattoo lovers for many reasons. The giant wolf Fenrir holds a negative image in Norse mythology due to its savagery, though it is also known for its unprecedented powers, which many tattoo artists symbolize in their artwork.

The ancient Norse mythology is full of fascinating characters. From trickster Loki to the chief god Odin, people are interested in the intricacies of Norse mythology, how vivid and detailed these characters are, and their significance, which is why their presence in the tattoo world is pretty frequent. Just how you are now seeing a detailed list of one of the most widely tattooed Norse mythology characters, Fenrir!

Fenrir, or the Norse wolf, was known to be a giant, savage wolf by Norse mythology scholars. Song of Loki and Angerboda, the monstrous wolf, was known among Vikings as a threat, for he was born to the demonic king. The giant beast was known to kill gods and did the same savagely, breaking free from the chains meant to keep it tame. Fenrir among tattoo artists is a frequently used symbol, though why do tattoo artists use it?

Besides being a feared beast, it contained qualities many people hope to achieve through experience and hard work now. Bravery, courage, strength, loyalty, and wisdom are the prime Fenrir traits that people can claim with the help of Fenrir tattoo designs. We have curated a list of Fenrir tattoos to offer various ways to ink this Norse wolf on your skin. Check these out to find your best match!

The vivid visuals and animations of video games are exceptionally cool; imagine getting one on your skin as a tattoo! The Norse wolf tattoo stars is a video game styles artwork illustrating the feral bind Fenrir trying to break free. The tattoo also represents Synthwave style, following its combination of neon colors to fuel the visuals of the artwork.

The Fenrir tattoo design significantly emphasizes the wolf’s feral nature with scary features and a strong upper and lower jaw which appears ready to bite down on anyone coming its way. Wolves being feared predators in Nordic countries symbolize it a source of strength and fear.

A creature with untamable savagery is meant to be bound and kept under control to keep its surroundings safe, and this Norse wolf was also supposedly held back with many old and new chains. Depicting its ravaging, the Fenrir tattoo above seeks inspiration from the feral expressions of the chained Norse wolf and uses it to create a beautiful tattoo.

The lone wolf can be seen snarling with its lower and upper jaw, ready to threaten. Fenrir wolf’s prime recognized feature is its anger and savagery, and the given illustration aptly contains it through the vivid expressions. The grainy black and white ink use work as a cohesive power to keep the art as authentic as possible while delivering a striking visual impact.

Traditional American tattoos are hard to beat, even more, when the illustration is detailed and spans a wide space to incorporate more details. The Norse wolf tattoo above spans the wearer’s entire back, allowing tattoo artists to go wild with their creativity through the large expanse. As a result, the tattoo artist did manage to create an exceptionally large and visually compelling piece to describe a feral Fenrir tattoo, bound in a new chain, standing over numerous remnants of slain warriors once alive.

Fenrir wolf tattoo meaning can vary with Fenrir’s depiction through the tattoo, though artists most widely prefer portraying its savagery. The tattoo above follows the traditional American tattoo style keeping the artwork bold and impactful in one glance, which other styles might not be able to justify.

The tattoo artist uses a balanced combination of black, gray, and white shades to create a realistic effect. The most difficult part to illustrate in this Norse wolf tattoo must have been the fur. However, it exceptionally assimilates as actual fur with depth, appearing to have a coarse structure. The signature Norse wolf snarl is also present in the artwork, making it recognizable.

Taking inspiration from Japanese tattoo styles, the Norse wolf tattoo design features a vivid combination of blacks and white and colored additions on the tattoo. The illustration is a highly graphic representation of the Norse wolf that broke free out of chains with a ripped human hand in its mouth. The Norse wolf tattoo has bloodshot eyes and appears close to its most popular feral self, only capable of savagery.

Vikings feared the monster for a reason, and the given symbolism justifies the mythological fear surrounding this beastly creature. While black and white shades were enough to use on the highly detailed artwork, colored additions further blew life into it, from the bleeding mouth to shiny chains that gave up under its snappy teeth.

Adding to your graphic tattoos collection, the feature illustrates a detailed close-up of a Norse wolf face, expressing fire-like rage in similar colors. The design aims to capture Fenrir’s brutality through detailed expressions, though an added aspect of fiery eyes and mouth exhibits a fresh creative take on fury.

The artist has used a combination of black, gray, and yellow to give diverse meanings to the tattoo, which might oscillate from the Fenrir on a hunt or the big wolf trying to break free in a battle. The beautiful graphic details are hard to find on other Fenrir tattoo ideas, so take inspiration from this illustration for your own tattoo design.

The Norse wolf tattoo might remind you of your favorite show Dragon Ball Z which often featured lightning and fiery background to depict raging fights amid protagonists. The Fenrir tattoo on the chest created with similar effects is an excellent addition to a colored tattoo. Wolf tattoos are usually illustrated in shades of black and white to maintain their natural color scheme, aiming for a realistic touch. The artist here did not hesitate to play with animated style and went on to create a detailed colored tattoo design.

The mythological wolf Fenrir was prophesied in Norse mythology to cause the death of many gods. From ripping Tyr’s hand to free itself or killing Odin during Ragnarok, Fenrir emerged as a symbol of destruction causing many causalities. Symbolizing its destructive, life-threatening nature, the Fenrir, as mentioned above, tattoo stars a snarling Fenrir with a skull in his mouth, appearing equally vicious as the Norse wolf.

The Norse wolf’s features, specifically its fur, are the most significant feature of this tattoo being intricately drawn.

Taking up the dark theme tattoo style, the graphic Fenrir tattoo adds a fresh touch to the illustration by using Fenrir differently. Instead of using Fenrir, the tattoo uses Fenrir’s skull in a ravaging pose, appearing to have come back for redemption.

The spilled black ink extends from the wrist to the arm, covering all its expanse in dark, black ink. The goth-styled tattoo is gaining huge popularity among young people, and this tattoo design is sure to gain you great compliments for a fresh take on the Norse wolf.

The illustrated Fenrir tattoo takes inspiration from Nordic mythology to add more aspects and deeper meanings from the time, including the savage wolf and Vegvisir. Vegvisir is a Nordic mythological stave known to represent a safe path for bearers amid rough weather conditions as a symbol of protection and victory.

The Norse wolf tattoo beautifully describes diverse Nordic symbolism as both the wolf and symbols represent significant aspects of the mythology. People looking for details take on Nordic mythology tattoos can go for this one!

Norse mythology is full of fascinating characters and events worth filling up your tattoo sleeves with thrilling themes. Choose what suits your message and personality the most. Find inspiration from the given tattoo ideas with a deep meaning.

While the tattoo designs above are excellent inclusion to your bucket list, you might want to look at a few more designs to reach your concluding tattoo design finally!

What is the meaning of a fenrir wolf tattoo?

What are some things to consider before getting a fenrir wolf tattoo?

Before getting a fenrir wolf tattoo, it’s important to consider the placement of the design and research different artists who specialize in this type of tattoo. It’s also important to think about the size and color of your design as these are factors that can affect how realistic and dynamic your tattoo looks. Additionally, if you’re considering a larger tattoo, it’s important to make sure you’re comfortable with the artist’s techniques and that they have experience in creating tattoos of this size. Finally, it’s important to consider any symbolic meaning behind the design, as this will ensure your tattoo has a deeper emotional connection. By considering these factors ahead of time, you can be sure that your tattoo will reflect what you want it to.

How much does a fenrir wolf tattoo cost?

The cost of a fenrir wolf tattoo will depend on the size, complexity, and artist you choose to work with. Generally speaking, a small to medium-sized tattoo can range from $50-$300, while larger tattoos can cost upwards of $500 or more. Some artists may also charge an additional fee for color or custom designs. It’s important to always discuss the cost of your design with the artist before getting a tattoo, so that you can be sure you’re on the same page and there are no hidden fees. Your artist should also be able to provide an estimate ahead of time, so that you know what to expect in terms of pricing.

What are some of the best fenrir wolf tattoo?

Some of the best fenrir wolf tattoos include designs that feature detailed and realistic renditions of the wolf. These can be done in black and grey, or even with a splash of color. Other popular designs include the Fenrir wolf howling at the moon, or surrounded by tribal symbols for added meaning. Other great ideas involve incorporating elements such as Norse runes or other symbolic imagery. The key is to find a design that speaks to you and reflects your personal connection with the Fenrir wolf. With so many creative possibilities, it’s easy to create a unique tattoo that captures your spirit and strength.