10 Best Viking Leg Tattoo Ideas That Will Blow Your Mind! 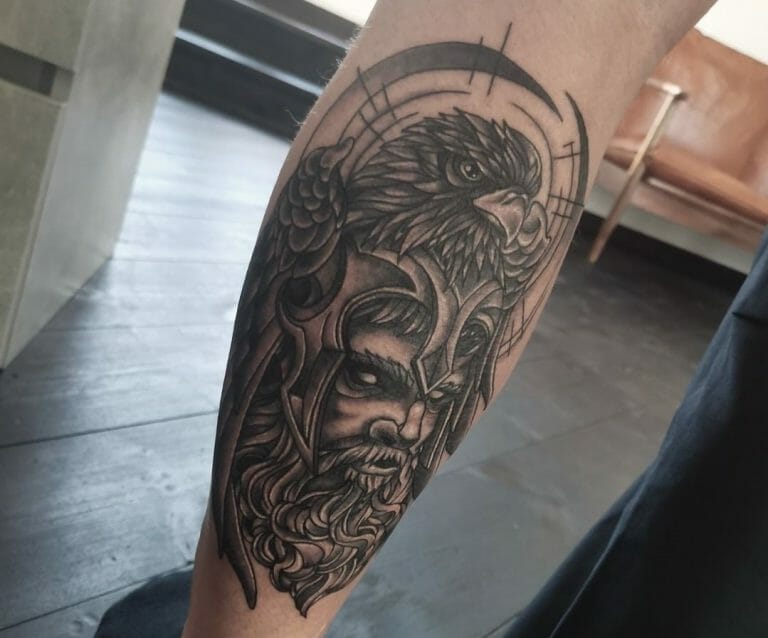 If you are an ardent follower of the Norse mythology, you must be dreaming of getting a Viking leg tattoo some day. Here is a list of Viking tattoos.

If you are looking for a sturdy and dynamic tattoo design, none can be better than a Viking tattoo.

However, before getting into the Viking and norse tattoo designs, it is essential to have a background knowledge about the Vikings and the Norse mythology. Throughout the Europe, from the 8th to the 11th century, the Vikings captured most nations and towns. With their great and immensely powerful fighting skills, these Norse people captured the different places of Europe and overpowered their opposing forces. In fact, the opponents of the Vikings were even struck with the appearances of the Vikings.

Conventional historical documents reveal that the Vikings had some man-made marks on their skin. Of them, the two most prominent ones are the Helm of Awe and Vegvisir. However, whether the Viking warriors would consider these marks as tattoos, is still not known yet. There are two reasons for which it cannot be strongly claimed if they had tattoos on their bodies. First, there is no archeological proof of the presence and preference of tattoos by the Vikings. Secondly, there is no written record that talks about the culture and society of the Vikings because most of their traditional heritage was passed down orally from generation to generation.

Later, Ahmad Ibn Fadlan, an Arabic scholar, traveled to what is now known as Russia. It is from him and his records that we come to know about the strong trade relations of the Vikings with the Arabs. During his travels, he came in touch with a person known as Rusiyyah. Fadlan was amazed to see the arms of Rusiyyah covered from the fingertips till the arms and neck covered in tattoos.

Generally, the Viking tattoos consist of images of animals, Viking god, Nordic symbols, and some patterns. From then on, people began getting traditional Viking tattoos in their legs, chest, arms, back and other parts of the body.

If you are interested to get a Viking tattoo on leg, the Norse tattoos are the ideal tattoo design for you. This is one of those Viking lower leg tattoo designs that is sure to grab the attention of many. The tattoo depicted here is a helm of awe tattoo which is traditionally known as Aegishjalmur.

This badass Viking leg tattoo has an in-depth meaning associated with it. The symbol here represents superpower and protection. Generally, such kind of a powerful symbol was worn by the Viking warriors while they used to go for wars. As one of the eminent Nordic symbols, the helm of awe tattoo is generally done in dark black.

When you are looking for traditional Viking tattoos, this Vegvisir viking compass tattoo cannot disappoint you. Just like the Viking warrior tattoo, these compass tattoo designs also have a deep connection to the Viking culture. Being one of the popular nordic symbols, this Viking inspired tattoo is associated with the ideas of direction, guidance and protection.

According to the Viking culture, this object with eight heads were carried by the Viking warriors as it was known to be the bearer of good luck. Back then, a Viking warrior used to believe that this eight-headed object could protect him from any untoward situation.

When you are hunting for Viking tattoos, here is a very popular viking God tattoo design. This is one of those Viking symbols that represent the ultimate knowledge and wisdom. For those who believe in the ethics and principles of Vikings, this Viking god tattoo is an apt design. Since there are several gods and goddesses in the Viking culture, one can choose the Odin or similar other Gods as Viking sleeve tattoos options.

According to the Norse mythology, a raven is an ominous yet highly intelligent bird. The raven is one of those Viking symbols that is connected to fatal emotions like death, pain and war. It is believed that the raven was pet by the Odin, a Viking god. To make the raven tattoo more interesting, one can incorporate other Viking symbols like the image of a Viking warrior or the Viking skull tattoo, or a Viking ship, with the raven. However, it is suggested that the tattoo artist chooses the right shades while inking a Viking raven.

The ship played a vital role in the lives of the Vikings. It was because of these ships that they were successful in voyaging to different lands and capturing new places. One of the most common invention at that time that later became a tattoo was the long-boat. The tattoo designs in this Viking ship tattoo can be enhanced more by adding an animalistic element to it. Often, these long-boats had a carved animal head (commonly a dragon or snake) at its prow. When one gets a Norse ship tattoo, it symbolises a new beginning, or an adventurous travel.

If you are looking for a Viking sleeve tattoo, this axe tattoo is the apt solution for you. Of the many weapons that a chivalrous Viking warrior would use, the axe is the most common. Having an axe tattoo beside a warrior tattoo or along with a Viking warrior tattoo is a perfect combination. Generally, an axe tattoo symbolizes bravery, protection, power and courage. To make the axe more appealing, the tattoo artist can draw some beautiful patterns on the axe. Ask your preferred tattoo artist to ink a Viking leg sleeve tattoo with the axe on it.

For the Viking warriors, the helmet was an piece of pride. Besides, the helmet had elements that would show their ranks in the team. Whenever the Viking soldiers would go out for a fight, they would wear the helmet and head straight to the battlefield. Therefore, it can be rightly said that getting a helmet tattoo would stand as a mark of protection, and courage.

If you want to get some Viking tattoos that makes a powerful statement about your character, the Berserker tattoo is an ideal solution. The berserkers were the Viking warriors who had incredible skill to fight battles fearlessly. So, if you want to do something fearless or believe in something rebellious and would like to practice it, the Viking berserker tattoo is apt for you. This Viking symbol is not just intimidating, but also showcases courage and valour.

The Yggdrasil, also known as the ‘Tree of Life’ is a Viking symbol that emanated from the Norse mythology. It is the image of a sacred tree that connects the nine worlds through its leaves and branches, thereby portraying the unison of the universe. This powerful Nordic Viking symbol stands for wisdom, harmony, destiny and power. To make this viking tattoo appear more interesting, one can customise it by adding some more Viking elements.

Now that you have a detailed idea about the Vikings, and their origin, you can head towards some Viking tattoos to get them done on your preferred body part. Make sure to take proper aftercare of getting Viking tattoos.

Here is a list of some more viking tattoos with interesting Viking symbols: