10 Best Tribal Phoenix Tattoo Ideas You Have To See To Believe! 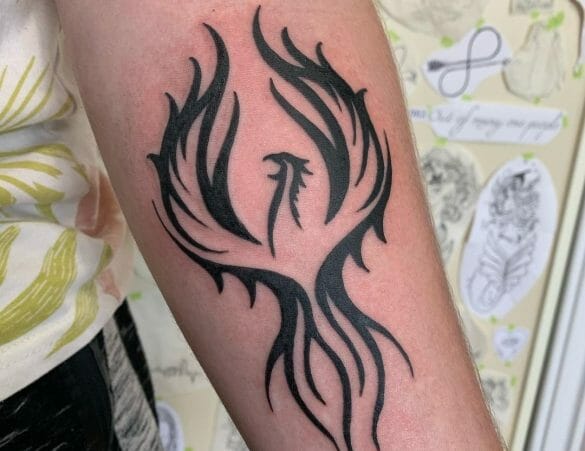 Are you looking for inspiration for a dragon and phoenix tattoo? Here we have some of the best tribal phoenix tattoo designs for you to choose from.

The idea of a dragon and phoenix tattoo is one of the best tattoo ideas for men and women of all time.

Phoenix tattoos are one of the fantastic bird tattoo ideas for everyone. Phoenix is a mythical bird with large wings associated with the sun and the notion of rebirth in Greek mythology. According to the phoenix myth, this bird is immortal and represents new beginnings, as it is reborn from the ashes of its predecessor. It is a strong belief that the bird starts to burn and create flames and then turns into ashes when it dies. Then these ashes give a new life to the bird, and it is reborn from the ashes. This process continues and makes the bird immortal. You can easily understand this process if you are a die-hard fan of Harry Potter. You can see in the movies of Harry Potter and the books the mention of this majestic bird. Some examples for a phoenix tattoo are a rising phoenix tattoo, a dragon and phoenix tattoo, a phoenix surrounded by fire and an orange free bird tattoo. So, let’s see some great phoenix tattoo designs.

Basic tattoo of any pattern is one of the most popular styles of any tattoo. This basic form of a phoenix bird tattoo is among popular bird tattoo ideas for men and women. People love bird tattoos because of their symbolism. Most of the bird tattoos symbolize freedom, love, and fierceness. The phoenix bird tattoo is among the unique sections of the bird tattoo. Phoenix tattoos are symbolism of fierceness and rebirth. This bird is believed to have the capacity to be reborn from ashes. In this image, you can see the mystic flames of the bird, which are considered inspiring and a symbol of purity. The entire tattoo is inked in thick black lines with a hint of grey. The shading of this tattoo makes it a unique and mesmerizing design.

The origin of tribal tattoos is as old as the earliest civilizations. Many men and women print or carve symbols on their bodies to differentiate their tribes from others’. People also used to print symbols on their bodies to signify specific ideas about their clan or life. This method was also used to indicate certain victories. Nowadays, people imprint certain tribal symbols and cultural beliefs to look cool or show faith in them. Phoenix is a mythological bird that is greatly loved by a lot of people. Mythical objects are trendy in tattoo culture. A beautiful mystic bird, phoenix tattoos symbolize rebirth and victory over death. In this image, the tattoo design is such a curly and typical tribal pattern. At first glance, it may not look like a phoenix, but when you look again and recognize the fearless wings of the phoenix. The outstretched wings look incredible in this phoenix tattoo.

Phoenix bird tattoos look more classy in black ink. But some people love colors, so this one is for those. Phoenix is generally believed to be of red, yellow, and orange color. These are also the colors associated with fire. Being the bird that rises from the ashes and can create flames, a phoenix is also known as a fire bird. Maybe this is the reason why a phoenix is believed to be the color of the fire. This big tattoo that almost covers the wearer’s whole body with its colorful flames is a fantastic idea for those who want a whole body or a full torso tattoo. You can see the bright plumage and long tail feathers of the bird. The colors of the bird and its wings symbolize different things in different cultures. For example, gold represents wealth, purple represents royalty, green is used for resurrection, and red is used to symbolize the immortality of the bird.

Phoenix Rising From A Rose Tattoo

This is a tattoo with a great message of rising, shining and new beginnings. This is a very inspiring tattoo design. This tattoo suggests that one should not give up once everything is over. You can start from the beginning and make a fresh start anytime you want. You are capable of achieving everything.

The classic patterns never get old. Just like the basic tribal phoenix tattoos, this classic one is also prevalent among tattoo lovers. These types of traditional tattoos are generally opted for by those who want to look cool. This tattoo is a very eye-catching one, and yet very decent. The basic black ink tattoos look very stylish and are very popular. Phoenix is considered a bird with vibrant colors because of its association with fire and the sun. But a black ink phoenix is more popular than the colorful one. This is because a black ink tattoo looks more classy and elegant. Classy and elegant tattoos go well with every outfit. Maybe this is the reason why people prefer the basic and the classic tattoos. If you are one of those, then you should go with this tattoo option.

A symbol is a prevalent aspect of tribal tattoos, especially symbols like sun, fire, moon, and other natural and celestial objects. The central theme of tribal tattoos is symbols. Symbols are used to signify certain beliefs and mystical ideas. What can be more impressive than depicting a magical idea of a phoenix by using some great symbols? A symbolic tattoo is a kind of minimalist tattoo that looks amazing anywhere on the body. This is a beautiful tribal phoenix back tattoo for men and women. This tattoo design depicts the phoenix rising from the dead and symbolizes rebirth.

You can show off your mysterious side from this tattoo. Symbols are generally considered weird by people. This is a very great idea to make everyone think like you are a mysterious person. If you want people to believe you are a reserved person, you can go with this tattoo design.

Quotes make everything more fascinating and give the tattoo a new meaning and significance. Using quotations in tattoos is an intelligent way of making the tattoo incredibly versatile. There are so many quotes that are used as tattoos and are gaining very much popularity. Using a rising quote with a phoenix tattoo makes the tattoo more inspiring. The style of this particular tribal phoenix tattoo is unique in its way. This phoenix tattoo pattern is beautiful and straightforward. The long wings and the tail feathers of the bird depict phoenix rising and rebirth. It tells the story of a phoenix rising from ashes. You can use any quote to make your phoenix tattoo more inspiring and personal. Along with a quote, you can also ink the name of a person who has inspired and motivated you to follow dreams. A phoenix tattoo would be a lovely dedication to your role model.

Mandala patterns are gaining very much fame in today’s world. Using a mandala pattern in any image makes it more beautiful and gives it a tribal look. Artists use mandala patterns in almost every design. This phoenix tattoo with mandala pattern and intricate details looks so stunning. This makes the mystic bird more mesmerizing. This big and awesome full-body tattoo can be your favorite choice to have a tattoo. The artist must have put so much effort into making this design. You can also have this tattoo on your body, and you need to find a good tattoo artist.

A unique full-arm design of phoenix tattoo. If you also want a full arm tattoo, then this is a unique tattoo. Generally, the full-arm tattoos are colorful and contain flowers, skulls, or small birds. But this one is a fascinating design. You got a full arm tattoo that goes till the shoulder but still does not cover your body a lot of space. Isn’t it amazing? This rising fire bird tattoo will look so cool on your arm. So what are you waiting for? Go and get this beautiful tattoo.

Again a classic black tribal phoenix bird tattoo with flames. But this one is different from the previous ones. This upper arm tattoo looks like a well-designed bird tattoo. If you look at the wings of the phoenix, then you can see that they look somewhat like gears and machine parts at first glance. If you love machines and cars, then this is a very excellent tattoo idea for you. The phoenix bird looks so fierce and powerful. In simple black ink, this tattoo looks enchanting and badass. This tribal phoenix tattoo is one of the unique phoenix tattoos out there with a deep meaning.

You must be wondering just what does a tribal phoenix tattoo mean for women or men, and it means the ability to be reborn from your past and face challenges at all times. Feel free to contact a talented tattoo artist near you to discuss body placement for these tattoos. Here are some more examples of phoenix tattoo designs for die-hard fans.