101 Best Small Phoenix Tattoo Ideas You Have To See To Believe! 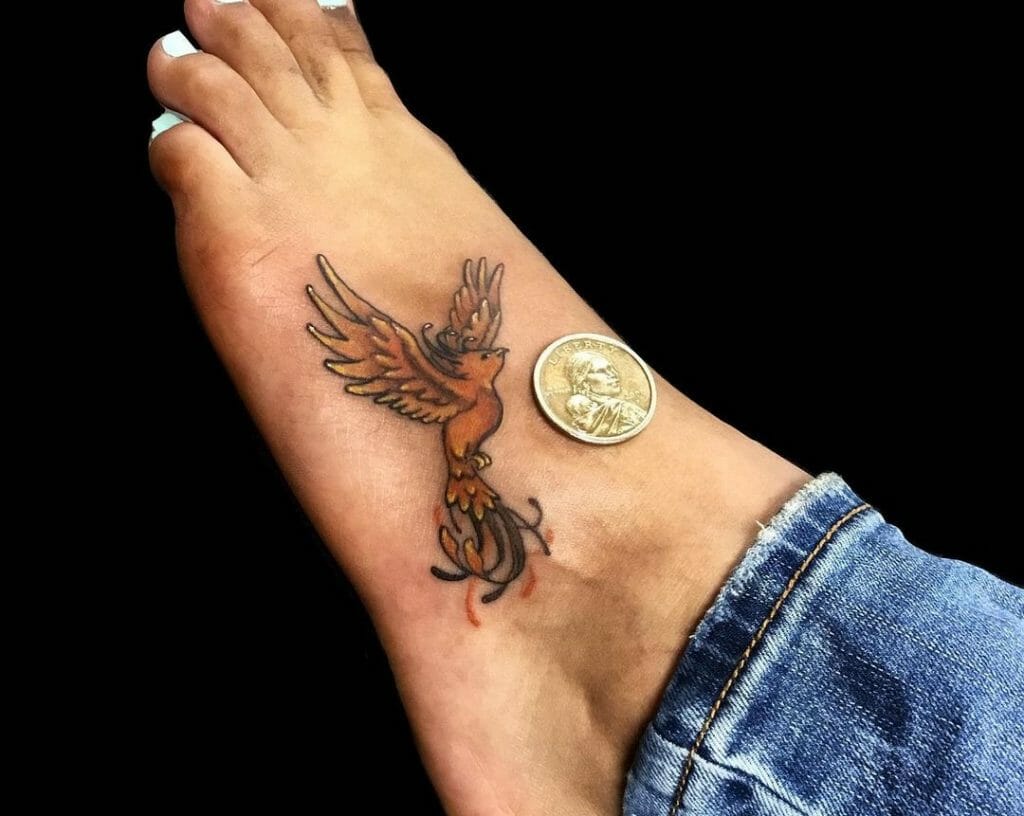 Are you planning on getting a Phoenix tattoo? Check out these amazing and cool Phoenix tattoo designs you would totally want to try!

The phoenix is a well-known symbol that represents creation, loss, and rebirth, as well as life’s changing patterns and rejuvenation like a dragon.

Many individuals choose phoenix tattoos since they symbolize a fresh start or new beginnings. The Sun, which is the source of power for all living beings, is also represented by the phoenix and dragons.

The Sun is a symbol of physical prowess for many people and it is linked to their religious convictions in many cultures around the world. Many people who have emerged as a ‘new individual’ after enduring hardships and challenges may liken themselves to the phoenix bird. You must be wondering, is a phoenix a real bird? The Phoenix has appeared in numerous myths and legends, and it is still a well-known emblem in mainstream culture. Although the actual beginnings of phoenixes are debated because they have been located in ancient many cultures such as Egypt, Greek mythology, and Chinese culture, there is no denying that these gorgeous animals are steeped in history and tradition. The fabled phoenix bird has appeared in a variety of works, including Ancient Greek mythology, Shakespeare, and the Harry Potter series.

The phoenix is one of the most well-known emblems of the past, symbolising rebirth and restoration. However, phoenix tattoos don’t have to be large or flamboyant to make an impression. Small phoenix tattoos are becoming increasingly trendy, and many women prefer them because of their adaptability. Such phoenix tattoos can go anywhere on your body while being modest and unobtrusive. This little phoenix tattoo is made on the forearm under the wrist. You can also get it inked on the upper arm. The dark pink flowers that were made in continuation with the tattoo design look amazing and attractive. The phoenix is made in rich black ink. The artist has drawn the lines of this phoenix tattoo with absolute precision.

If you have overcome adversity or turbulence in your life and emerged stronger and brighter, you will be captivated by the image of a phoenix rising from the ashes tattoo. The creature is known to resurrect, putting behind its former life and taking birth as a stronger being. The shading in pink, purple, blue, and green colours look absolutely stunning. The amazing colour combination and feather design of the phoenix tattoo gives it a bold yet gentle look. Such big phoenix tattoos make a good fit for the forearm or thighs.

The Phoenix symbolizes rebirth and progress. Hence, it’s a good symbol to represent your self-improvement or development. The Phoenix is not your average animal. This mythical bird can rebirth itself. When it is near death, it will erupt in a beautiful fire only to rise from its ashes again. This amazing moon in the night sky and phoenix tattoo is a masterpiece. The shades of blue used to give the tattoo depth and greater meanings show the talent of the artist immensely. The phoenix tattoo is made on the back a little below the shoulder. The moon looks absolutely stunning, with delicate shading of light blue, white, and dark blue colours. The phoenix faces the moon as if flying towards it. These simple phoenix tattoos are worth your time and money.

The Phoenix is a perfect choice for anyone looking for a tattoo that depicts triumph. It’s also a good option for anyone who wants to honor a difficulty they’ve conquered. This ornate phoenix tattoo looks quite attractive. While there’s no solid body form in this phoenix tattoo, the symbol and contours are essentially that of a phoenix. It pulls focus to the most important visual parts. This phoenix tattoo is an excellent approach to making a statement without overdoing it. The tattoo is made on the side of the stomach in plain black ink with flowy details and light shading.

The Phoenix’s ability to rise from its ashes represents rising above adversities by leaving one’s entire life behind and embarking on a new beginning. This tattoo design looks like an emblem rather than a freestyle design. The lines are black ink and bold and the corners are sharp and have an edge. The face looks more like an eagle but the shape of the wings makes you realize that it is no doubt a phoenix. A forearm phoenix tattoo like this is a great idea if you want a large visible design. The placement is ideal for getting tattooed because it does not cause as much difficulty as other areas, like the chest or back. This would make a great tattoo for men.

Time and again people resort to the phoenix to symbolize a new beginning or journey. It is a popular choice for tattoos since these mythical creatures can defy death and resurrect – a powerful image indeed. Because no other organism can achieve this, the Phoenix has strength that is unrivalled by any other creature. This phoenix bird tattoo encourages the wearer to push themselves to achieve greater accomplishments in life. The phoenix tattoo is made on the leg a little above the ankle. Although small, it looks adorable. It is made with plain black ink and the phoenix wings have a little bit of shading in them done with the same ink.

The phoenix is frequently associated with fire and the sun, acting as a metaphor for restoration and resurrection. The majestic bird is associated with the Sun since both represent life, vitality, and hope. Many phoenix tattoos depict a phoenix rising from flames or ashes, which can be interpreted as expressing vitality or desire. Indeed, the diverse colors make it a popular style for males, who chose it to signify the energy of the sun and flames. This tattoo also made with red depicts a flaming phoenix. The red-orange colour of the phoenix’s wings appears as if the bird is burning and rising from its ashes. The tattoo is made on the back just below the neck. You can flaunt such a phoenix tattoo by wearing a backless outfit.

This traditional phoenix tattoo is made on the back and looks amazing. It is made a little lower than the neck and has a halo of light on its head, making this magical creature look even better. The detail on the feathers is the cherry on the top. The phoenix image painted here screams power, life, and strength. The bird appears to soar high in flames, radiating hope and positive energy. This phoenix tattoo can have different meanings for different people. Nevertheless, the phoenix is an inspiration for meaningful tattoos for men of all ages.

This black-inked phoenix tattoo looks so mesmerizing, doesn’t it? The intricate details given to the tattoo and the feathers of the phoenix are mind-blowing. The wings and claws of the phoenix are etched to perfection. The fact that this phoenix tattoo is made in black ink gives it a bold look. The artist has paid attention to every detail of the bird to create this marvellous piece.

What is a small phoenix tattoo?

A small phoenix tattoo is a small symbolic representation of the mythical bird that is believed to be able to rise from its own ashes. It symbolizes rebirth, transformation, and new beginnings. Small phoenix tattoos are often placed on the wrist, arm, or back as an expression of strength and resilience. They can also be used to symbolize a person’s journey towards self-discovery and personal growth. The design of a small phoenix tattoo can vary greatly, from bold black outlines to intricate color designs with small details. No matter the specific design, it is sure to be a meaningful reminder of courage and strength.

What is the best placement for a small phoenix tattoo?

The best placement for a small phoenix tattoo depends on the design and the wearer’s preference. Some popular placements include the wrist, arm, back, chest, and ankle. Smaller designs may be suitable for more delicate areas such as behind the ear or on the foot. The most important consideration is to find a spot that is easily visible and that will not interfere with clothing. It is also important to make sure the area of skin chosen can accommodate the design without being too stretched or distorted.

What phoenix tattoo designs are most popular?

The most popular phoenix tattoo designs feature the bird in various poses, either rising from a fire or perched atop an object. Some designs incorporate colorful details, while others may be entirely black and white. It is also common to find designs that feature additional elements such as flames, feathers, dragon wings, or other symbols of transformation and rebirth.

How much does a small phoenix tattoo cost?

How long does it take to get a small phoenix tattoo?

The amount of time it takes to get a small phoenix tattoo depends on several factors, such as the size and complexity of the design. Simple designs can typically be completed in one session, while more detailed tattoos may require multiple sessions. Generally speaking, a small phoenix tattoo will take between one and two hours to complete. It is important to remember that the healing process also takes time, and it can take several weeks before a tattoo is fully healed.

Yes, small phoenix tattoos do require special care to ensure they heal properly and last for many years. It is important to keep the area clean by washing twice.