101 Best Filipino Tribal Tattoo Forearm Ideas You Have To See To Believe! 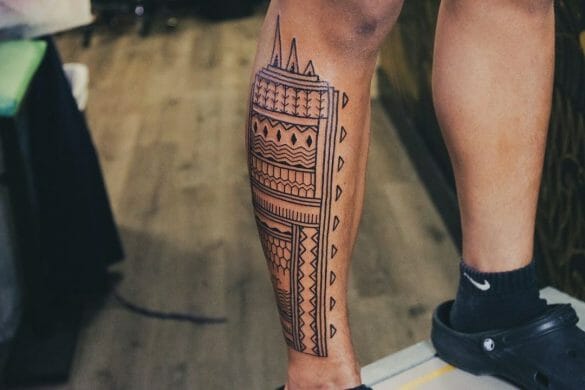 Do you want to show your Filipino roots by tattooing a classic tribal design? Check out these 10 amazing Filipino tribal tattoo designs to inspire your next ink.

Filipino tribal tattoos are a symbol of social status, protection, and Filipino heritage.

Tribal tattoos have always been an integral part of the Filipino community and bear a multitude of cultural significance. Apart from enhancing the beauty of the wearer, these designs are a symbol of spiritual guidance towards the path of enlightenment.

Subjects for these tattoo designs come from different aspects of nature like mountains, streams, and living creatures. The patterns are usually geometrically placed centering around a body part. These tattoo designs are generally inked in monochrome with elaborate detailing.

A Filipino tribal tattoo design is more than just body art! It is an illustration of the lifestyle, traditions, and heritage of the indigenous tribal community. Keep on reading to find out about some ancient Filipino symbols and meanings that will evoke your interest.

If you are in search of a tribal design with a modern touch, then this is the one for you. The subtlety of this design is enhanced by the intricate fine lines used in drawing it. Perhaps, this delicate artwork has a deep symbolic meaning attached to it. It is an amalgamation of more than one tribal symbol, each carrying a spiritual interpretation of its own. The circle above with rays of light radiating outward denotes a compass. It gives the direction for the pathway of a spiritual journey. The semicircular lines below are known as ‘ginawang’ that conveys freedom. The leaves stand as a symbol of growth in one’s journey.

You can opt for a feminine tribal design with decorative patterns on the neckline like the one shown in the picture. This traditional tattoo design is popularised by the indigenous tribe of the Kalinga province in the Philippines. The intricate patterns are tattooed with perfection using black ink. Each of the patterns carries a discreet meaning in their culture. Perhaps, the triangles represent unity and faith. This ornamental design will highlight your features by making your neck look more elongated and surely fetch you plenty of compliments! Kalinga tribal tattoo for women is symbolic of feminine beauty and fertility.

Here is another Kalinga tattoo design with a unique twist! The tribal design is inked with great detailing on the foot of the wearer. Here, the hexagonal shapes appear like the python’s skin. Perhaps, it makes a popular style for these designs and finds its place in most of these Celtic tribal tattoos. Moreover, the flowing stream of water in a winding course at the bottom paints a picture of rural life. The artists take inspiration from nature and portray them in its truest form. The negative space in this design is filled with black ink to create a contrast. This can be a fascinating idea when it comes to side tattoos for men and women alike.

If you are in search of the best tribal tattoos inspired by the mandala art then here you go! The stunning visual of this design is enhanced by its monochromatic layout. The artist drew the whole tattoo using red ink and crisp detailing. A crescent moon, placed in the centre of the design, has become the focal point of attention in the frame. In ancient times, Igorot tattoos denoted the number of human heads taken during a hunting spree by the tribe! Apart from your shoulder, you can place this enticing tribal art on your stomach as well.

Here is another great alternative to a Filipino tribal tattoo forearm on a circular frame. The mandala art inspired design is inked around a crab. Crabs are known to make long journeys in deep waters. In the same way, the people of the tribe migrated long distances through forests and oceans. Thus, crabs hold a deep meaning in the tribal culture. Perhaps, it signifies that the wearer is fond of travelling just like his ancestors in search of new land.

An armband tattoo design combined with the tribal symbols can effortlessly uplift your fashion statement. The diamond-shaped symbols lined at the centre denotes the crab. Its symbolic meaning is associated with guidance, protection and a representation of the world. The triangles lined on the edges represent ferns and are symbolic of fertility and strength. Perhaps, the crabs combined with the ferns denotes the land of the dead. You can also add colours to make this tribal armband tattoo look even more appealing. You can also turn your tribal armband tattoo into a more elaborate sleeve tattoo covering your full arm.

Sacred Filipino Tribal Tattoo On the Back

This unique design on the back is an amalgamation of different elements of nature and their association with different tribes! The curved lines converging at the bottom denotes the flowing stream of water. The flying bird at the centre carries the message of freedom and happiness. The star symbol at the top is elaborately detailed with intricate patterns. Perhaps, the flow of the water, the path of the bird and the direction of the stars will guide the wearer on the journey of life.

Here is another stunning alternative to a back tribal tattoo design with impressive floral detailing. The rising sun is placed at the top of this vertical tattoo design. The symbols are inked with precision and strategically aligned one after the other. Tribal designs of celestial bodies such as the sun and stars along with the cycle of day and night are beautifully depicted in this Filipino tattoo. Moreover, the incorporation of the floral motifs adds to the beauty of this design.

If you are in the quest for a lion tattoo with a touch of tribal art then this is the one for you! Here, the mane of the roaring lion is inked with intricate tribal designs. Apart from giving it an intriguing look, each of the patterns carries a symbolic meaning of its own. Perhaps, tattoos of tribal lions denote royalty, heritage and a specific clan designation of tribes. You can place this statement Filipino tribal tattoo on the body parts that will provide a large canvas to ink the details.

You can go for a simplistic hand tattoo design of Filipino tribal art like the one shown in the picture. Here, beautiful tribal designs are inked on the hand of the wearer and each carries a meaning of its own. The leaves are drawn with minute detailing and framed by straight lines. The arrowheads point towards the crab at the centre. Perhaps, the arrows are symbolic of movement or direction in their culture.

The rising sun is beautifully portrayed with a minimalistic approach in this tattoo design. The arrow at the bottom further enhances the visual of the design. The sun combined with the arrow represents a mystical guiding force. You can opt for this design if you are in search of a tribal design with a hint of spirituality.

This elaborate and detailed half sleeve tattoo is an amalgamation of Filipino tribals symbols with Celtic tattoo designs in one frame. Each and every space is detailed with intricate patterns and specific portions are emboldened in black to create a contrast. Inking this design can be a great way to pay tribute to your roots. Wear this stunning tribal design to display your lineage with pride!

Animals are an important theme of Filipino tribal tattoos as they are an integral part of their culture. Here, a winged cicada is inked on the back of the wearer along with celestial bodies. The insect stands as a symbol of resurrection and has been drawn with great detailing. The sun and the star stand as a symbol of light and darkness. The tapering end of the body of the insect resembles that of a scorpion which is symbolic of strength. You can wear this unique tribal piece anywhere on your body according to your preference.

What is the meaning of a Filipino tribal tattoo?

A Filipino tribal tattoo usually has a meaning that is specific to the wearer’s tribe. It can represent their status within the tribe, or it can be a way to show their allegiance to the tribe. Often, these tattoos are also seen as a way to ward off evil spirits.

What is the history of Filipino tribal tattoos?

Filipino tribal tattoos have a long and rich history. They are believed to have originated with the ancient tribes of the Philippines, who used them as a way to mark their status within the tribe. These tattoos were also often seen as a way to ward off evil spirits.

How are Filipino tribal tattoos traditionally made?

Filipino tribal tattoos are traditionally made by hand-poking the design into the skin with a sharp object. This method is still used today, and it is said to be more painful than modern tattoo methods.

What are the most popular Filipino tribal tattoo designs?

There are a variety of popular Filipino tribal tattoo designs. Some of the most common designs include animals, such as tigers, dragons, and eagles. Other popular designs include flowers, geometric shapes, and tribal symbols.

What are the most popular Filipino tribal tattoo designs?

There are a variety of popular Filipino tribal tattoo designs. Some of the most common designs include animals, such as tigers, dragons, and eagles. Other popular designs include flowers, geometric shapes, and tribal symbols.