10 Best Simple Knife Tattoo Ideas That Will Blow Your Mind! 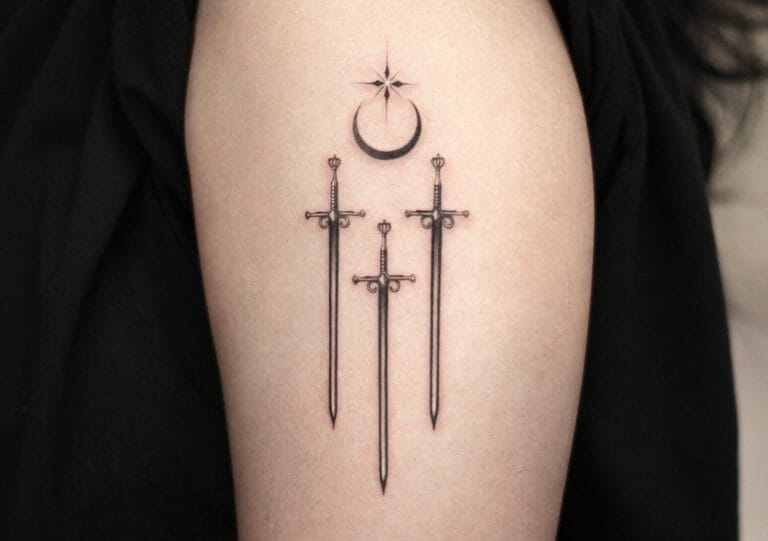 Are you a tattoo lover? Do you wanna try something different? Here are simple knife tattoo ideas y’all might love! Get one of these impressive designs now!

Knife tattoos are famous in the tattooing industry for quite some time.

Knife tattoos were even famous in the 20th century because swords and daggers knives did not vanish from our lives. Therefore like dagger tattoos and sword tattoos, the popularity of knife tattoos did not cease in thin air.

Knives are one of the first tools known to human kinds. Ancient men and women used knives to collect meat and were also used as a weapon. They carried it along with them and kept it closer to their body to fight against wild and dangerous animals. So from the olden days, the knife tattoo design is quite popular among humans.

Snakes are one of the most popular tattoo ideas in the tattooing industry. A snake and dagger tattoo or knife tattoo simply signifies triumph over constant war or struggle that one face and fight in their day to day life. It may also depict the obstacles one overcomes daily to survive. A snake around a dagger or a knife is also a reference for the Roman God Mercury.

In this snake tattoo, the snake is wrapping around a thin pocket knife and is ready to attack its predator. The snake has an open mouth which is enhancing the look of the knife and making it look like a deadly weapon. The tattoo artist had made this design on the skin of the lower arm area. This tattoo is for those who are looking for some rough and tough designs.

Here is one of the most unique knife tattoo designs one can get himself or herself inked with. Blood on the knife symbolizes death. But here one can depict the tattoo as a symbol of bravery.

The tattoo design over here consists of a beautifully designed silver knife. The handle of the knife tattoo is made in black ink and has a golden pattern designed on it. From the edge of the knife’s blade, there is blood is dropping down. One who wants to portray their bravery can surely opt for this design.

A knife whenever it crosses through a heart stands or represents betrayal or something very devastating or heartbreaking.

Here in this tattoo which is inked on the arm, there is a heart made up of human skulls which is also a sign of death and sacrifice. The meaning of this tattoo is one ought not to play with others’ emotions The knife in this tattoo pierced right through the middle of the heart. The knife is basically in the shape of a dagger. The dagger has a very thin and sharp iron and the handle of the dagger has a star similar to a pole star on it. Folks who are in search of unique tattoo designs must love this design.

Knife tattoos or dagger tattoo designs which have skull ink by it or through it is a symbol of memory, bravery, death as well as protection. Here in this tattoo design, the tattoo artist has a beautifully inked Knife and Skull Tattoo right on the centre of the lower forearm. The knife or dagger is piercing the Skull through behind. The knife has a wooden handle and a wide blade. There is not the upper portion of the skull with a frowning expression. There is a devil’s horn protruding out from the head. And near the forehead of the skull, there are two cross marks. And few blood drops are dropping down from the lower part of the knife. Guys who are willing to portray their bravery and masculinity to the entire world and surely choose this tattoo design to get themselves inked with.

A Chef’s knife tattoo signifies a chef’s knife that he or she used while cooking food. The symbolism behind the chef knife tattoo is the dedication of one toward his or her profession. Chef Knife Tattoo can also be a sign of skill and expertise one possesses in the cooking field.

Roses are one of the most beautiful flowers and hence it is the most preferred as well as popular tattoo designs among teenagers and females. Here we have picked up the best knife and rose tattoo design for rose lovers. Rose and dagger tattoos or knife tattoos depict love, beauty, joy, hope and hardship. Rose is symbolic of passion, beauty and secrets whereas a dagger or knife conveys a darker and ugly side. The main meaning of this rose tattoo is that both joy and hardships can easily coexist.

This tattoo portrays a dagger piercing between two roses. The dagger is in the shape of a sword. The shape of the sword is similar to those which were used by royals of the medieval period. The dagger is made in black ink which depicts the ugly or difficult side of hardship. The two roses are drawn alongside their leaves. They are mainly made up using black and blue ink whereas the leaves are made using black and yellow ink. So if you are in search of a cool rose tattoo this might be a great option for you!

Simple Knife Tattoo With A Face Of A Girl

Here in this tattoo, there is a reflection of a girl’s face on the iron blade of the chef knife tattoo. Facial features like the nose, eyes and lips of the human lady are prominently visible on the knife. Surrounding the knife there are many feathers and leaves like structures. The entire knife tattoo is made up of black ink. The tattoo is made on the lower arm region. One who is searching for a very unique tattoo design idea can at least try to get themselves inked with this rare design.

Here in this tattoo design, there is a pocket knife or dagger which has a handle that is tied up in a thick thread. The thread ties up a moth along with the dagger. The moth has a skull head which is related to the afterlife and a drastic transition the soul has to go through. The upper wings of the moth have crescent shape moons on both sides. And the lower wings have a designed outline tattoo.

Whenever butterflies and knives or swords are tattooed together it represents the courage a person needs in order to become a fighter so that he or she can overcome all the hurdles life will throw at them.

In this knife tattoo, there is a bent pocket knife which has a flexible blade which can be folded into the handle. The butter is sitting just on top of the knife with its beautiful wings. The tattoo is inked on the lower arm region. Also, the entire tattoo has been made up in black ink.

Knife Tattoo piercing through skin often signifies survivalism, sacrifice and bravery. But these are the positive aspects of this tattoo design. This tattoo design can also represent betrayal along with loss.

The position of this tattoo design is just on the side of the face. The place is exactly between one’s ear and eye. The neo-traditional dagger in this tattoo has a very beautifully designed handle which is penetrating the sword right into the skin and is coming out from the other end. In the middle area of the sword, there is an eye which is placed just on the skin that is being penetrated.

There are many more Knife Tattoo designs which we could not include in this list. But here are other suggestions for you all which might attract you people.