10 Best Butcher Knife Tattoo Ideas That Will Blow Your Mind! 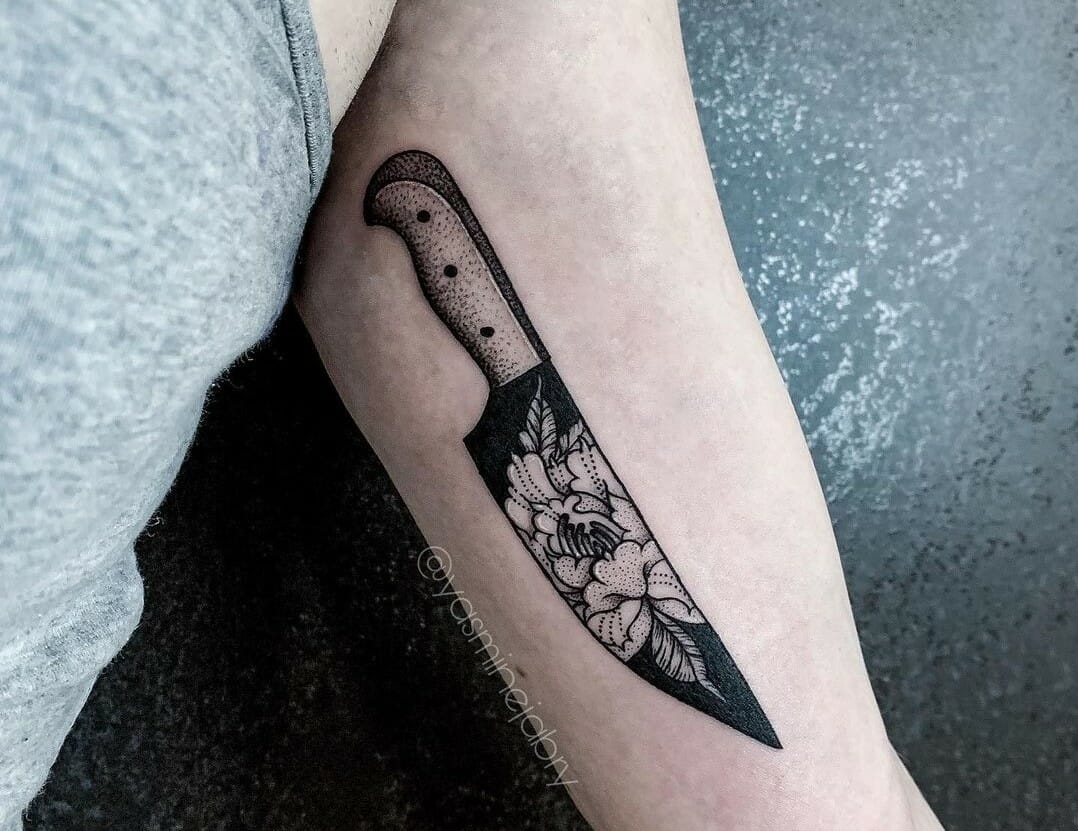 Here is a collection of butcher knife tattoo ideas that can inspire you to decide on your preferred style of tattoo to get inked!

The knife is a powerful tattoo symbol to cut ties with materialism and unwanted things or people.

It can also symbolize one’s desire to end toxic relationships. The traditional butcher knives that penetrate and damage your skin to the modern cooking knives have been a popular utility knife tattoo design for quite some time.

Until the mid-18th century, the butcher knife was one of the essential tools for mountaineers. The knife tattoo designs can vary a bit in meaning and can symbolize liberation, sacrifice, and death.

Post-industrial revolution companies started manufacturing knives with exotic metals used to cut meat and bone. Knives are dangerous, harmful tools to life and need to handle with care. You can consider variations on these knife tattoos by inscriptions on the blade or handle.

The tattooist is the one person you can rely on and who has the power to change and influence choosing your best tattoo and reading your mind. The knife tattoo designs look fabulous on any part of your body, and if you want attention, think of your desired knife tattoo from our compilations.

We hope you find an answer with these inspiring collections that we share with you, featuring the ten best knife tattoo designs for men and women. If you are interested in these tattoos, you can look for some more recommendations at the end and choose your best tattoo.

Halloween is a tradition of sorts where people light bonfires and wear scary costumes to ward off ghosts. This tattoo creation is of a Halloween knife eye tattoo that reflects a chilling pair of eyes with eyebrows raised on the knife. The leaves around the knife tattoo add to the creepy atmosphere. The artist has beautifully used the colour of the wearer’s skin to make the eyes look natural and alluring in this tattoo.

Floral elements seem to go well with all tattoos as it enhances the beauty of the creation. In Japanese-style tattoos, peony represents nobility and bravery, and the red colour symbolizes love, passion, honour, and respect. The red peony flower cut without the leaves looks bold and distinctive, outlined with black ink, and the red shades add a feminine feel to the tattoo.

Demon tattoos are potential designs that symbolize fear and a warning to stay away. Generally, demon tattoos portray the content of the war between good and evil.

The blade of the demon knife tattoo is shown in typical monotone colours and is a filled-out version of a half skull with a single horn. The eyes are sunken in, and the tattoo’s teeth are exposed with a horrifying grin. The artist has used black and white combinations with a black border to depict this terrifying knife tattoo.

This tattoo is a stunning eyelash butcher knife reflecting a genuine image of a lovely lady with gorgeous eyes and eyebrows. The artist has used shades of black and white colours on the knife tattoo and has brilliantly used the natural tint of the wearer’s skin to portray a realistic tattoo—a lovely creation with immaculate perfections.

This image is a fantastic stone-faced knife tattoo of a beautiful lady finished using whip shading. You can also see a red heart below the eye, symbolizing love, happiness, and gratitude. Indeed a rough cut finish.

This minimal knife tattoo looks stylish and has a pencil-finished look using various shades of black. It also shows another straight and sharp instrument with a pointed tip and a wooden handle with a metal ring hook at the other end. The round metal hook is provided for easy handling while hanging—a well-done artist image of a tattoo.

Popular illustrative tattoos include floral and fine lines taking inspiration from the traditionalism and realism tattoos and are a tangled mess that may look colourful or simply black. The tattoo depicted by the artist uses black and tints of pink with lots of detailing to include the flowers, leaves, face, and lines. It is infused with creativity and looks impressive. The face of the lady behind the flowers looks natural and charming, and the body of the knife is outlined with black ink.

Oni mask knife tattoo is a choice for people who believe in good and evil forces. It is a mask that symbolizes protection for people from the devil who believe in the spiritual world. The artist has drawn a half-faced angry Oni mask knife tattoo with a single horn, a few sharp teeth, and a couple of fangs sticking out using black and white shades. The half Oni mask tattooed on the blade of the butcher’s knife portrays an enraged look.

This butcher knife forearm tattoo depicts a wildflower and represents joy and positivity. You can see the tattoo created with different shades of black ink filled with petals of wildflowers overflowing the edges of the blade brilliantly conceptualized.

The meaning of the knife tattoos can vary depending on the elements included alongside the knife. As human civilization progressed, these deadly weapon knives evolved from primitive bronze knives to the latest niche ceramic cooking knives available in the world around. Here are more suggestions for these knives, which will inspire you to get your perfect tattoo for men and women.