10 Best Sailing Ship Tattoo Ideas That Will Blow Your Mind! 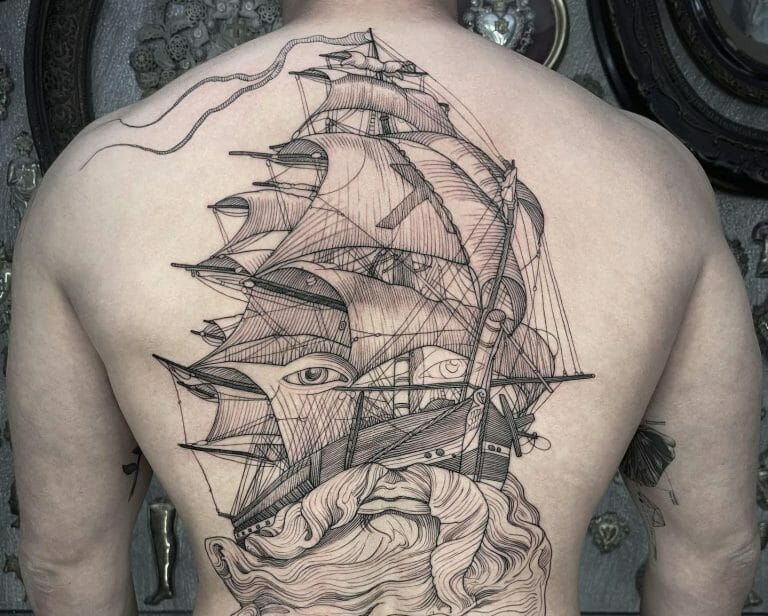 Ship tattoos are actually embellished and beautiful tattoo designs that most people choose to have for themselves.

Ship tattoos are not only eye-catching and stunning but also they have cultural and historical significance. Tattoos are a source of inspiration for many of us.

A Traditional ship tattoo speaks volumes about the European culture and its long history, for example, a handcrafted sailboat, or pirate ship, reminds us of how the new lands were discovered. One can easily find and choose from a huge range and variety of ship tattoos such as pirate tattoos, nautical tattoos, sailor tattoos, and many more! Here’s a list of significant and creative ship tattoos that will help you to select the best for you.

Although ships are meant to be safe in ports, they are not built for this purpose only. The discovery of the ships has made men’s life easier as they can explore the world beyond land. It also gives people a new life. Every kind of ship has its own special significance, be it Noah’s Ark or the present-day commercial cargo ships. Ship tattoos can have different meanings in various cultures.

Sailing ship tattoos are one of the most common ship tattoo designs that anyone wants to have. A ship tattoo can be found all over the world. This tattoo art is found to be popular among both men and women. A pirate ship tattoo has gained much popularity because of its attractive designs. A Sailing ship arm tattoo and a sailor moon tattoo are the ones that can be flexible on arms as they will enhance the look of your arms.

Nautical Tattoo And Its Symbolic Purposes

A ship usually leads us to our destination, no matter if you are a vicious pirate or an excellent sailor travelling across the sea for new lands. It is believed that a nautical star is a symbolic reminder. They hold deep significance as they remind a person to create his own path. The unique fact about these tattoos is that they are the symbol of guidance, protection, and good luck.

There are several Nautical tattoos that anyone can choose from. Even now a nautical star tattoo is very much popular in different Navy Seal and among the members of the coast guard. You can have your ship tattoo on the wrist, arms, and in many places of your body. Ship tattoos can be inked in black, grey, and many other colours.

When we talk about marine body art (tattoo art), ship tattoo is among the best and most alluring. Also, a pirate ship tattoo is one of the marine-inspired elements that easily distinguished itself from the other ship tattoo and hence make them unique. Sailing ship tattoo Tumblr play a major role in many casters and seamen life. Also, these sailors’ tattoos symbolize their way of being, a new way of life as they depend on the open sea to look after their families.

The ship tattoo can be done in or around any portion of the hand. It can also be done on the wrist as the wrist is considered to be a very important juncture in our hand because it carries blood to the thumb. A ship tattoo also becomes a symbol of energy and long life for a person who either has it for himself or for their loved ones.

The first thing that we have in our mind when we talk about pirates is a group of rogue sailors who take what they want. It doesn’t matter what they are, we have a feeling associated with pirates and their images symbolize some same traits to the people and that is the reason why people want to have pirate ship tattoo designs on their bodies.

Tattoos with transportation like ship tattoos are very appropriate for any artistic person who is in need of motivation. The ship tattoo can also be implemented on adventurers and enthusiastic people, and sometimes people who always shift their shelters. Therefore, the tattoo ship styles are really ideal for those people.

It is claimed that one will dwell in a new life after following the application of such tattoo ship designs as the wearer himself feels motivated to improve something in his life. They are mostly done in black ink as it gives an authentic and genuine look.

You can have yourself a tattoo that not only involves the tattoo ship but other different elements too which are related to the sea such as sailors, sea wrecks, sea waves, navy vessels, and ship wheels. One can put on elements like an anchor or a compass to enhance the ship tattoo and express the love for the sea more explicitly.

When a person has a ship tattoo on, finally it is completely over that person what meaning he desires to imply through his tattoo. The compass ship tattoo can also be used as a way of elevating the confidence of the ship tattoo bearer.

The metaphor of this kind of ship tattoo is closely associated with the wearer’s life. The main analogy of the ship tattoo originates from the sailors and their daily life activities. A traditional dark ship tattoo also speaks about a journey full of adventure. Dark ships were associated with the rugged pirate: the threatening sailor. They used to navigate to the dark world that lies through the tumultuous sea and they tackled it all.

Anyone can utilize this ship tattoo to quench their adventurous thirst. Bearing this kind of black and dark tattoo on the hand, chest, back, and even on the leg could mean that the person is full of zeal and fervour. To sum up, the ship tattoo symbolizes the liberated strength and vitality of the person.

Ship Tattoo Confined in a Bottle As A Framed Picture

Bottle tattoos sometimes suggest the contrasting nature of the sea. One can have the ship tattoo composed to seem captured in the bottle. This particular ship tattoo can either mean a person’s wish and desire are confined or something is a hostage.

This ship tattoo bottle art will fit best on your shoulders, arms, legs, and back.

A vintage ship was used to travel the world’s oceans. It is also utilized for exploring new lands and completing certain missions.

This skull ship tattoo can be used to convey the extraordinary courage and power of the wearer.

You can have this skull ship tattoo on your body by adding waves throughout or pirate handling the wheel. This ship tattoo could mean that the person is more than ready and prepared for anything that approaches his doorstep.

People who wish to break free from the chains of the same old drudgery and monotony of life can get any ship tattoo inked on themselves to remind themselves of the willpower and the strength that they possess to achieve their goals. Here are some more ship tattoo ideas that can be enthralling for all ship tattoo lovers.