10 Best Viking Ship Tattoo Ideas You Have To See To Believe! 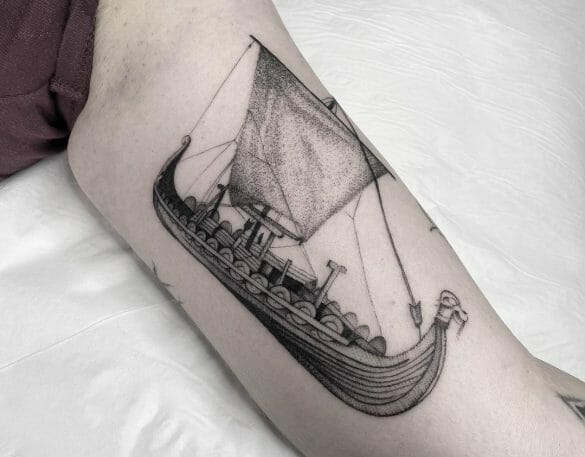 Viking Ship Tattoos are a mark of a mixture of fear and bravery at the same time.

The Viking tattoo ideas originated from Viking mythology where people who were mostly slaves used Viking ships to raid other islands in order to attain freedom and wealth. The Viking culture is very strong and that is why we have Viking inspired tattoos.

But the tattoo artist has also drawn various details such as the seagulls flying right above the Viking ship and are soaring high in the wind. Right under the large Viking ship tattoo, we see that there is another portrayal of a dead skull tattoo that has been kept over a Viking trophy. This is a symbolism in the Viking culture which symbolises the death of evil and the victory of goodness.

The ship has been portrayed as if it is sailing in a rough turbulent sea. The tattoo artist has used great shading methods in this tattoo. Not only is the entire Viking ship shaded in black and grey but the tattoo artist has also used the blending method to make sure that everything is balanced and not way too dark.

The background of the entire Viking ship has also been shadowed with black to make sure that the ship does not look abstract on the skin but rather look more real and intense.

This is a very iconic Viking ship’s tattoo. Looking closely at the details, what captures the first look is the Norse status symbol which is a compass. It is the symbol of guidance and navigation to the people who want motivation for better hope for the future and a change of thought or decision in their lives.

The tattoo artist has detailed each and every pattern and figure in this entire tattoo however the tattoo artist has also kept the element of mystery by keeping various shades of black and various patterns that are crossing over each other above the figures that are drawn in this tattoo. A very well exhibited and unique Viking ship tattoo.

This Viking ship tattoo is more of a story on a human body than just a plain tattoo. The Viking ship has been drawn at the very bottom, sailing in the ferocious sea. Right above the Viking ship is the Nordic compass which is a symbol of protection and guidance which is very symbolic in the situation because the Viking ship can be lost in the sea however in the presence of this compass, makes the tattoo more meaningful and more mythological.

There is a hint to Odin’s ravens that have been drawn to symbolise the ever watched gaze of the gods on the journeys embarked upon by humans. The tattoo continues from the back of the lower back region towards the shoulder region and then ends in the wrist of the right hand making it very large however a continuation of the entire story that the tattoo is trying to exhibit.

This Viking ship tattoo although seems to be quite simple yet, is a beautiful way to portray the story of the people who are usually lost but can find a way in the end. The Viking ship is trying to sail in a very bad climate however what makes it worse are the various holes on its panels, which makes the Viking ship imbalanced and the entire Viking ship can turn over into the sea.

However on the contrary the tattoo artist has tried to bring out a motivation by adding a Nordic Compass right on top of the Viking ship which is taking over most of the space in the sky. This tattoo is quite spiritual in nature and has an extensive symbolic meaning behind it.

In this Viking ship tattoo, the story of fighting warriors has been portrayed in a very splendid manner. The tattoo artist has drawn the Viking ship with utmost detail and what makes this tattoo different and more unique from the rest is the figure of the brave sailors who are riding this Viking ship and are not trying to give up, rather they are fighting against the sea.

The tattoo artist has used various shades of black and grey in this entire tattoo to make it look more realistic and has done a remarkable job in doing so.

This tattoo right here is a creative piece of art. It has all the important features of the Viking culture. At the very top, we have the Viking warrior which has been drawn using a very dark shade of black and has been shaded to bring out a good expression. On the left, we have a Valkyrie – one of Odin’s maiden who escorts dead warriors to Valhalla.

In the centre, we have the Nordic Compass which is the symbol of protection and guidance in the Viking culture. Lastly, at the bottom, we have the Viking ship which is sailing against the angry sea waves and the clouds in the background have lightning and thunder. A great piece of art by the tattoo artist using just black ink however using it at its utmost by making various light and dark shades out of it.

This is a smaller portion of a Viking ship tattoo which is mostly drawn on the shoulder pads region. This tattoo mainly focuses on the structure of the Viking ship which is the head of a wolf figure at the front. Right by its side, we have various shields that are used to guard the soldiers who are trying to use the spares against their enemies.

Then we have the entire block of wood-like pattern throughout the shoulder region which is also a little abstract but fits the situation and the design that the tattoo is symbolic of.

This Viking ship tattoo is a rare creative art that there ever is. The tattoo artist has used various figures and different colours in this tattoo which makes it rare and unique. At the very top, we have the figure of the evil eye encompassed in a triangle. Then we have a cloud of waves in the night sky which covers the entire upper region of the backside. Right under that, we have the King holding its weapon to defeat the enemy.

If you look closely you will find that on each shoulder patch, we also have the Nordic compass which is a very symbolic and traditional design. Then right at the centre, we have the Viking ship which has an aggressively detailed headboard of an animal that is trying to sail against the roaring sea. Last but not least at the very bottom we have a mermaid sailing underwater which adds a punch of fantasy and mystery to this piece of art.

Some other Viking ship tattoo designs are as follows: