101 Best Small Ship Tattoo Ideas That Will Blow Your Mind! 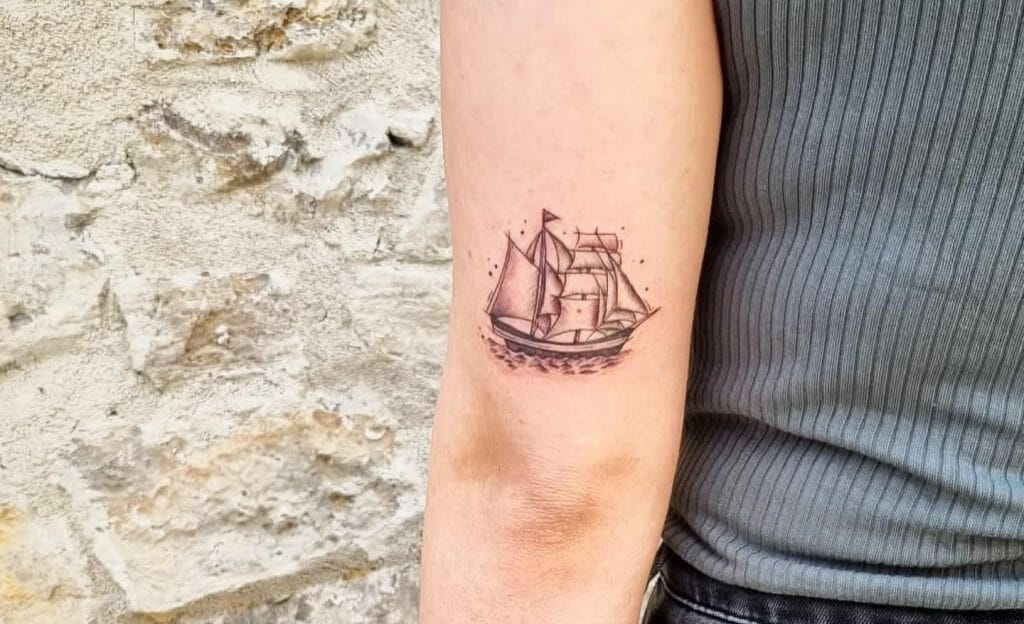 Ship tattoos are amazing and are an example of perfect beauty.

People who feel connected to the sea, sailors, sails, and waves can ink themselves with small ship tattoos. There are a number of elements that are included in ship tattoos like swords, compass, ship wheels, stars and apart from the previously mentioned.

A ship tattoo is recognised as one of the popular designs as most people like it. You will be amazed to learn that, in the recent past, most of the navy people used to ink themselves with ship tattoos. They generally had sailing ship tattoo designs on their body. It is worth mentioning that the ship tattoo is filled with symbols that incorporate nautical and aquatic, alongside revealing a voyager’s soul.

The question might crop in your mind what does a small ship tattoo mean? To be more precise, a small ship tattoo portrays a life of sailors far away from the land and between waves, seas, and oceans. A ship is nothing but a vessel of a seafarer and can be metaphoric or a literal presentation of a sailing ship and sailor.

The amazing tattoo has been painted on the forearm of a man. In addition to this, it is worth mentioning that the tattoo ship is designed with a compass, anchor, trees, a house, and a lighthouse. It strongly shows how the person loves to sail on ships. At the same time, shows how deeply he is connected to the land, his house and his loved ones. If the small ship depicts the desire to journey on the sea, the anchor reminds the sailor to stay firm, strong, and tranquil to overcome the storm. The small ship tattoo with other elements like the lighthouse, trees and anchor is a symbol of protection as well as safety in their own life. A lighthouse on one hand is symbolic, an appreciation of sailing or a reminder to follow the light shown by god.

If you too long for sailing on the seas and do some adventure you can always select this tattoo as it will show a perfect balance between your longings, and desire to be safe alongside protected.

The small tattoo ship that has been done on the forearm of the boy falls under the category of pirate ship tattoo ideas. The tattoo is black and indicates adventure. A pirate ship tattoo indicates a group of amazing people or crew members. Besides, pirates and the pirate ship stand for a life that is outside the four walls of this typical society owing to their distaste holds in pirating, and pillaging the people living within the normal boundaries of the society. Single sail highlights simplicity whereas, multiple sails stand for the experience.

Pirate tattoos can be designed with additional features like compass, wheel, rope, nautical stars or even anchors, ocean waves and sea birds to make the tattoo more attractive and enchanting. It can also be designed by you with a traditional ship holding banners and quotes.

The ship tattoo that has been inked on the arm of the man falls under the category of a traditional ship tattoo. Traditional ships stand for seafarers and sailors. When it comes to traditional ships, it should be highlighted that it is the most popular, favourite maritime symbol of tattoo. his stans for a myriad of things. Traditional ships portray new homes, journeys or beginnings. Simultaneously it stands for good luck and honour, bravery, or even a troubled past.

If you share had faced a troubled life, towards a new beginning, you can always select this simple but awestruck style to be inked on your arm.

The sailing ship tattoo has been done on the arm of a man and is black in colour. There are a number of sails in the tattoo and it is designed with numerous birds and flowers. It is worth mentioning that when it comes to a sailing ship it always indicates new begins. It can also symbolise adventure In addition to this sailing ships signifies good luck along with bravery and honour. It might also stand for a troubled past. This is a perfect example of a traditional tattoo. When it comes to birds they always symbolise living happily and freely in life. birds also symbolise a connection between the earth and heaven. Roses on the other hand stand for beauty friendship and love.

If you share similar perspectives towards life and are at the threshold of commencing a new journey or have gone through a troubled past then you can easily ink yourself with this selling strip design.

The picture of the small ship comes with a minimalist design and has been inked on the arm of a person. The design of the small ship is added with that of clouds And it’s raining.  the title clearly shows a storm on the seas.  When it comes to storm tattoos that mean when ships are paired with clouds and green it symbolises misfortune.  If the tattoo it’s paired with lightning then it simply indicates triumph over trials and overcoming storms. On the other hand, small ships always represent good luck bravery and honour.  Therefore the title simply symbolises triumph over the storm.

You can always get yourself inked with these minimalist tattoos as these are much in vogue nowadays.

The tattoo is a beauty in itself. It is amazing and jaw-dropping, with potential enough to attract all. The special tattoo has been designed on the theme of a pirate tattoo but is designed with nautical stars and a compass. In addition to this, this amazing piece of art is containing a wheel along with shooting stars in the sky and the full moon. The tattoo is well executed and the tattoo artist has been able to successfully express the perspectives that are related to this tattoo design.  Nautical stars always represent hope and direction whereas shooting stars symbolise the dreams or wishes of a person. Nautical stars also reflect the 4 points of the compass. On the other hand, pirate ships always stand for bravery, a different way of life along with honour.  It falls under the category of compass tattoo. When it comes to compasses it is linked with sailors and fishermen and was expected to bring good fortune to them.  Moreover, the compass is considered to be the universal sign for the person who finds fulfilment in constant travelling.

The tattoo is filled with enormous meaning. And it’s beautifully portrayed by the tattoo artist. You can always get yourself inked with such a masterpiece.

The pirate ship tattoo is drawn on the hand of the man and this design is with a storm. A pirate ship signifies bravery and on the other hand, it should be mentioned that storm tattoos deal with misfortune or a trivial situation that has been overcome with courage.  The tattoo is a perfect amalgamation of bravery and courage and can be linked by the ones who share similar perspectives.

Inked on the forearm of a person the bigger tattoo is of course a popular style and falls under the category of traditional tattoo. The tattoo simply signifies a new beginning. The tattoo is colourful in nature and stands for a way of life that completely depends on individuals. Glancing at the tattoo gives a positive life and signifies journeying on the sea.

The enormous Viking ship tattoo is covering the arm and shoulder of a man and is a symbol of bravery along with something which is reckless.  When it comes to Viking ships refers to fear as Viking ship stands for some battles or rage that is going to be followed. Fear is something that is filled in the air.

So if you are brave enough to fight in your life when you can surely select this one.

The mesmerising tattoo that has been inked on the upper arm of the person simply symbolises the dangers and perils of life at sea. the tattoo also falls under the category of storms tattoo clearly shows the storm in the sea that the sailboat is facing.

It is spreading a strong message and anyone who displays bravery can select the design.

When it comes to the image of a ship it signifies sites that are away from daily drudgery and pressure of the society. The small ship tattoo also depicts emancipation from life on land and losing oneself in the vastness of blue seas. Some ship tattoos might carry a meaning of solitude, and loneliness or can carry the air of adventure. A tattoo ship can also indicate friendship, a reliance that permits sailing together smoothly. There are a plethora of suggestions for ship tattoos beginning from Viking ship tattoos, pirate ship tattoos, ghost ship tattoos and others listed below.